Church of Our Lady of the Altomare

What to see in Otranto, Lecce, Apulia, Salento 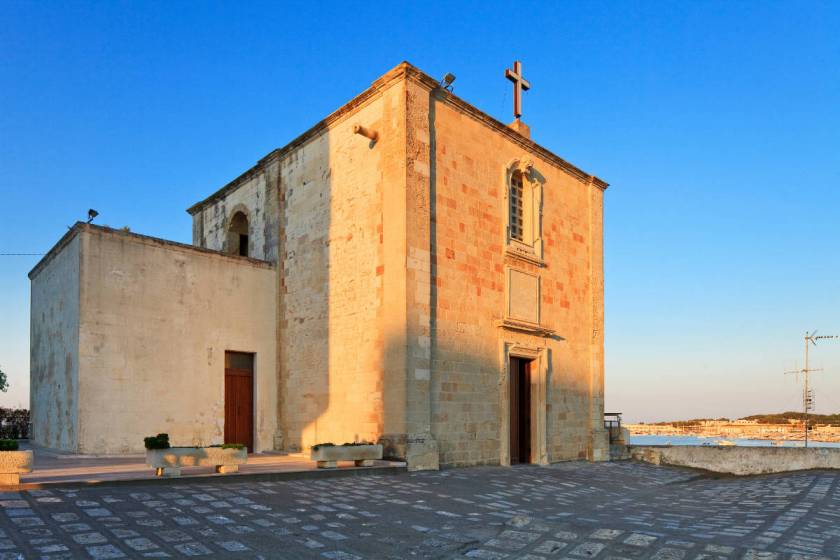 built in the XVII century, the church is perched on a tufaceous spur that drops directly into the sea, and is dedicated to the Holy Spirit. The interior has a single nave, presents the altar dedicated to the Virgin. Special features of the structure are the decorations which recall the maritime tradition: the mosaic floor is decorated at the center with a star of seafaring tradition, surrounded by the Savoy knots or to eight. All the furnishings, even lighting, recall the themes of the sea: from the Cavalluccio Marino at the Delfino, from the anchor to the shell, the latter that brings together a double symbology: linked to the sea by a part, linked to the Iconologia of perfection on the other.

Of ancient origins is the devotion and attachment to the Madonna of the Altomare from part of the inhabitans. The first week of September, the population pays tribute to Our Lady with solemn celebrations, conducting the statue on a boat for the traditional procession in the sea. This custom derives from an ancient legend linked to the sad story of the Turkish invasion in 1480. Legend has it that the statue was stolen from the Ottoman troops and driven away. A young otrantina, reduced to slavery at the Caliph, I beg him repeatedly to liberate the sacred Icon, renouncing any claim on its liberation. The statue was then placed on a boat, without crew, and crossed the Otranto Channel. I see her arrive, fishermen tried in vain to reach it, but managed to recover only when alone went into the port between the celebrations of the city.

Strada Provinciale per Miggiano, km 1, n. 53, Specchia (Lecce)
27.27 Kilometers from Church of Our Lady of the Altomare
Masseria Uccio
Entirely made with stones and tuffs of the place is a testimony of the ancient peasant civilizati...