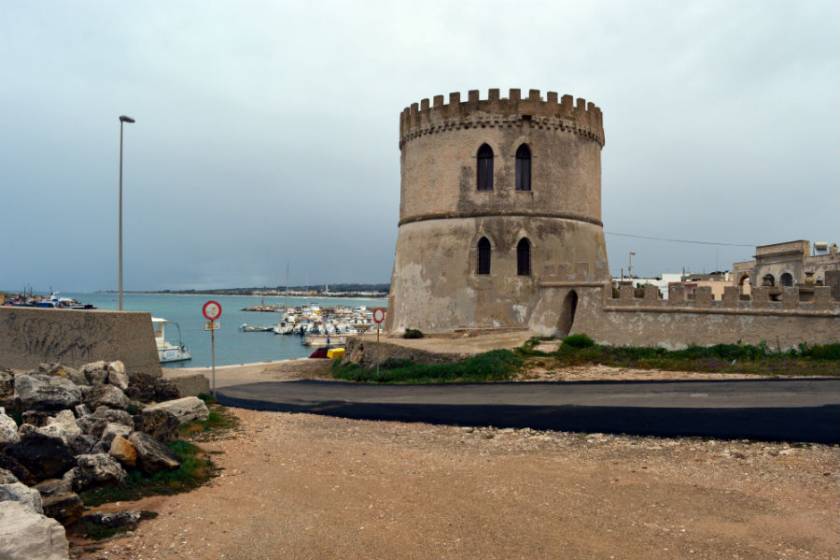 the tower, approximately 12 meters high, has a conical base and the circular base. It is composed by two floors, separated externally by a bull marcapiano. The accesses to the tower are two: the first one is guaranteed by an opening in the enclosure that enters in the atrium discovered; from this there you enter in the two premises for storage and by means of a ladder in masonry, ground floor slightly raised. The second external access is located along the western side of the tower, with the presence of some steps. The connection between the planes, inside, is guaranteed by a scale. The supporting structure of the tower is in masonry, constituted by ashlars of tufa stone. Particular is the crowning on top, composed of a series of corbels and by a flat battlements very simple. Between the series of merlons and that of the corbels listed four machicolation, a in the direction of each cardinal point. The windows have a pointed arch. Above the time it was placed a small observation tower. On 26 June 1576, the mayor of Morciano Giovanni De Judicibus receives from the mayor of Lecce a falconetto in bronze for the arming of the tower. In 1608 the mayor himself requires to the representative of the R. The Court the reimbursement of the salary paid to the corporal of maritime tower of Morciano (COSI 1989). On July 5, 1671, in the Book of the dead of the parish of Morciano, you record a murder of a young man of the place, by a handful of Turks who were pushed into the hinterland morcianese, at the Masseria of Mr Duke alli Paduli. The same day the Turks captured as slaves other inhabitants of the aforesaid masseria, among which some children (Aquinas 1988). The tower of Morciano witnessed another sad episode, reported by Aldo Simone, occurred in 1752: "... we saw in our sea six sciabecchi Turks and Algerians, one of which fell a lance with inside many Turks, and diè hunting three boats pescarecce di Salve, which fished close to the tower of Morciano. Two of them knew of the woods enemies and immediately saved over the predicted tower, but one which was of Mr Nicola stasis, trusted to fish, but having at the end saw at the Turks began to flee and eventually saw that it was inevitable nephrops diè is on the ground near the tower of Morciano, where li four sailors that there were saved. Li Turks predarono meanwhile the boat of said Nicola Stasis with certain fish, wine and seafaring clothes. The tower pulled against them some gunfire and very well and the cavallaro of Morciano schioppettata a, at which the Turks answered and dropped on the ground the pursued, but then immediately returned with the predata boat to bastimento" (SIMONE 1981). The tower had supplied a horse, by which the Cavallaro, just loomed the possibility of a landing of pirates, ran to rein toward the country to raise the alarm and to give time to the women and the children to escape, while men to prepare for defense (ADVANTAGE 1995).

Via Madonna di Fatima - 73039, Tricase (Lecce)
11.98 Kilometers from
Hotel Salento
Hotel Salento and Noviera restaurant are located in the village of Specchia, the heart of the Sal...

Strada Provinciale per Miggiano, km 1, n. 53, Specchia (Lecce)
13.43 Kilometers from
Hotel Salento
Hotel Salento and Noviera restaurant are located in the village of Specchia, the heart of the Sal...