What to see in Corigliano d´Otranto, Lecce, Apulia, Salento 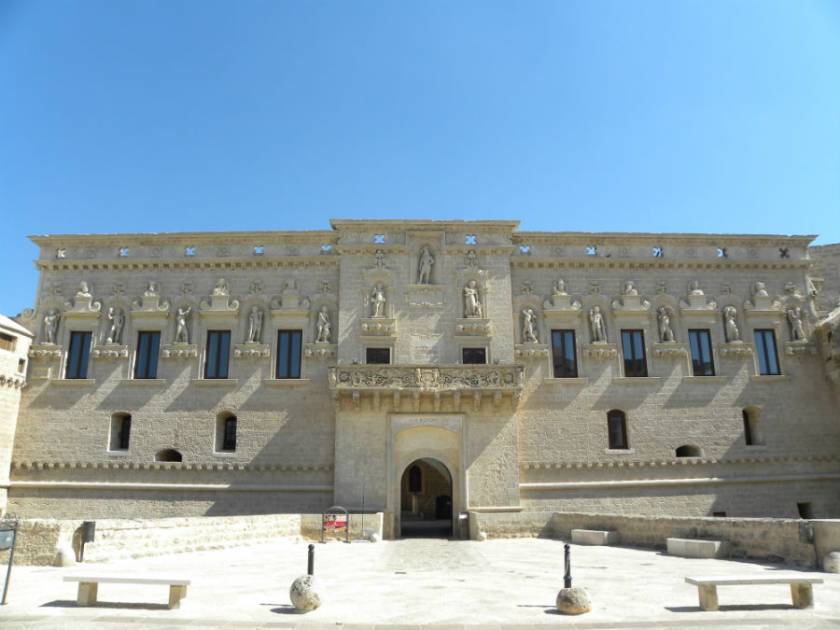 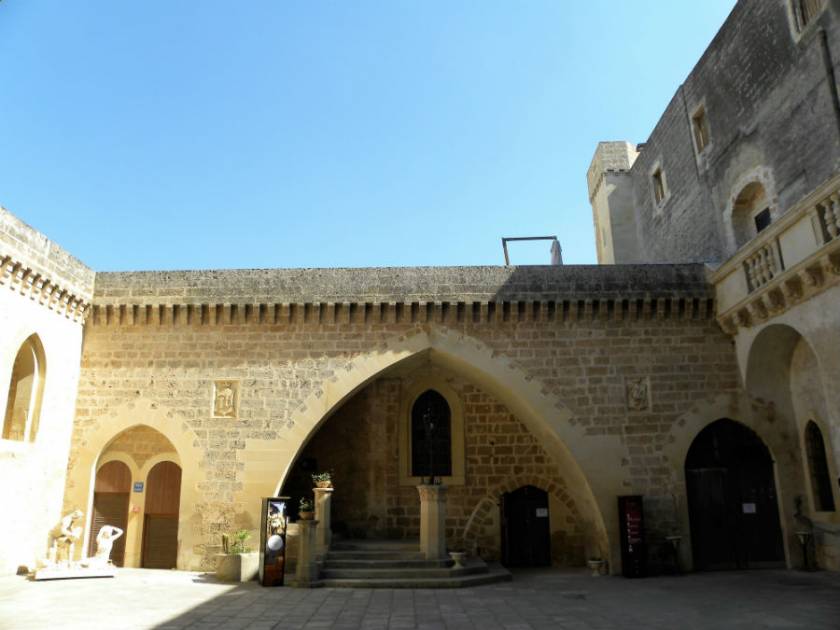 The De' Monti Castle of Corigliano d'Otranto is certainly the best model made of the passage from the square towers to those round the castle has in fact quadrangular plant with four angular towers on the basis of the escarpment and at three levels of fire, surrounded by a deep moat. Medieval castle it was radically restructured and enlarged between 1514 and 1519 by Giovan Battista de' Monti that the adapted to the needs of war and the principles of the military art of the time using the local craftsmen. It is entirely surrounded by a moat and develops on a square plan with angles of which engage four massive circular towers; these was entrusted with the greater effectiveness of the entire defensive system, as denote the numerous gunboat that open along the sides in correspondence of the internal fire barriers arranged on the ground floor and first floor. Each tower has the heraldry of the de' Monti accompanied by allegorical depictions of the four cardinal virtues and the bas-reliefs of as many saints under whose protection is placed each tower.

Looking at the main facade, the tower on the left is entitled to Saint Michael the Archangel whose effigy is flanked by the allegory of the fortress; the tower on the right is dedicated to Sant'Antonio Abate at which is flanked, even if now practically cleared for the erosion of the stone material, the allegory of temperance. Other towers are entitled to San Giorgio and San Giovanni Battista, whose reliefs are respectively associated with the allegorical depictions of prudence and justice. Failed its original defensive function that certainly remained of primary importance for the whole of the Sixteenth Century, to half of the Seventeenth Century the castle was adapted, in accordance with the fashion of the time, for aesthetic requirements and representativeness of the family of the feudal lord. In fact, the duke Francesco Trane, belonging to the family of feudal that in 1651 it had acquired the fief from the last of the de' Monti, in 1667 ingentilì the austere military building making build a new facade, superimposed to the pre-existing, on which deployed a series of allegorical statues accompanied by commemorative inscriptions and by the busts of the great leaders of the past; at the center did put his statue flanked by the allegories of justice and charity.

The targa epigraphic placed at his feet informs on his qualities and its noble titles: "PONDERAT CULPAS HEC HEC EXIBET UBERA NATIS / HIC ASTREA MICANS HINC PELICANUS AMANS / FRANCISCUS TRANUS CHEATER TUTINI AC DOMINUS / STATUS COROLIANI CASTRUM HOC CURAVIT EXORNANDUM 1667" ("This judges the misdeeds, this other presents the breasts to children; on one side the shining Astrea, on the other hand the loving Pelican; Francesco Trane Baron Tutino and lord of the state of Corigliano took care to embellish this castle in 1667").

He endowed her also the new main facade of a balcony overhanging delimited by an elegant balustrade in pietra leccese richly decorated with friezes, fantastic animals and floral motifs in the center of which made studded the arms of their ancestral houses. The baroque facade placed in correspondence with the bridge of access is the work of 1667 of local maestranze directed by Mastro coriglianese Francesco Manuli.

S.P. 277, Via Giurdignano, Otranto (Lecce)
17.20 Kilometers from
B&B Centro Storico
The Bed & Breakfast Centro Storico rises in the heart of Otranto, on the ground floor of the anci...

Via Madonna del Passo 68, 73028 , Otranto (Lecce)
20.22 Kilometers from
Hotel Salento
Hotel Salento and Noviera restaurant are located in the village of Specchia, the heart of the Sal...

Via Madonna del Passo 68, 73028 , Otranto (Lecce)
4840.56 Kilometers from
Masseria Uccio
Entirely made with stones and tuffs of the place is a testimony of the ancient peasant civilizati...

Via Madonna di Fatima - 73039, Tricase (Lecce)
4813.09 Kilometers from
Hotel Salento
Hotel Salento and Noviera restaurant are located in the village of Specchia, the heart of the Sal...