What to see in Pacentro, L'Aquila, Abruzzo 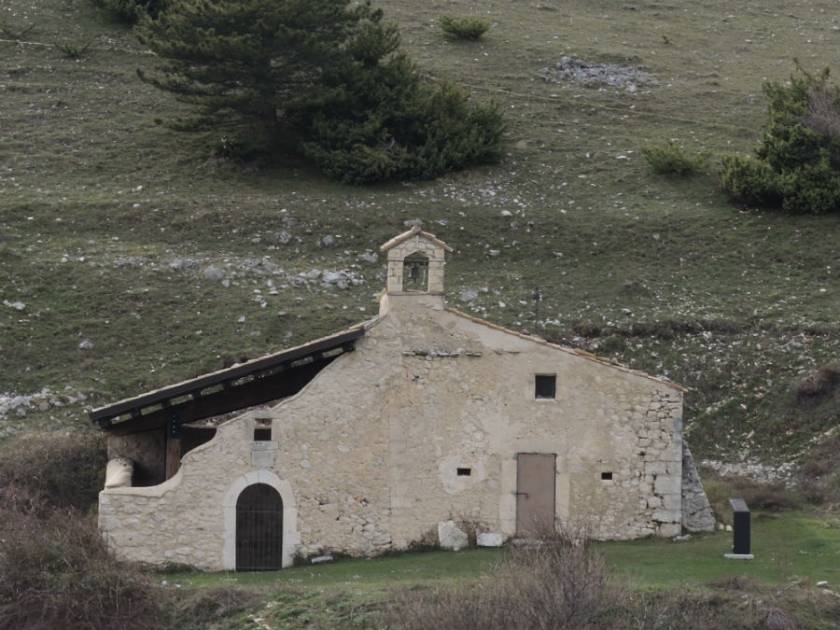 the hermitage of San Germano is located along the road that leads from Jupiter's Land to San Leonard's Pass at about 1120 m a.s.l., inside the Majella National. The hermitage is formed from two structures which have arisen in different eras: on the right looking at the facade there is a chapel, while on the left there is a housing structure. The facade is characterised by the chapel on the right, with its access door rectangular, and the living area on the left, with a portal for access to arc. Almost in the center of the facade is a bell gable.

The chapel, dating back to 1428, has a rectangular plan and is covered by a barrel vault, of which he remains a part above the altar in marble. Above the altar is placed a shrine with the bust of San Germano bishop. At the outer corner of the north-east of the church there are the spurs, presumably made to reinforce the structure after one of the earthquakes in the area. The living area (XVIII-XIX century) is instead partially collapsed and the protection of the structure has been recently carried out a wood covering. Presumably was to be used as a shelter for shepherds during the transhumance.

Via Cappuccini 10, Caramanico Terme (Pescara)
13.88 Kilometers from
B&B La Rua
Garni B & B La Rua is a lovely property located in the beautiful old town of Pescocostanzo, situa...

Via Pescara, 2, 67038, Scanno (L'Aquila)
20.01 Kilometers from
House Hotel Tiroasegno
In Lama dei Peligni you can stay at Casa Albergo Tiroasegno, in the heart of Majella National Park.

Via della Difesa, 15, Scanno (L'Aquila)
4864.20 Kilometers from
B&B La Rua
Garni B & B La Rua is a lovely property located in the beautiful old town of Pescocostanzo, situa...