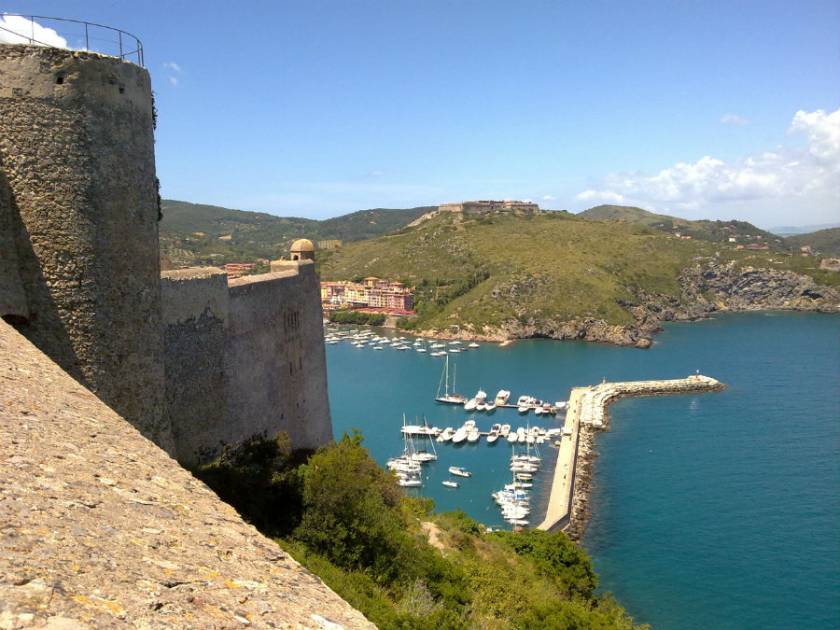 On the hill on which now stands the Spanish Fortress of Porto Ercole there was formerly a small oratory dedicated to San Giovanni Evangelista, mentioned by Pope Gregory VII in a papal bull of 1074. Unfortunately the medieval history of this territory has reached us very confused, because these lands were conquered and sold at a distance of a few years. There was stability only when this territory was given in emphyteusis to Margherita Aldobrandeschi, countess of Sovana, from the Abbey of the Three Fountains. She had built a square tower on the current poggio della Rocca as symbol of stone of power. This tower will be the first nucleus of the Fortress. In the tower later passed in heritage to the Orsini family of Pitigliano, which brought to term the work of fortification. With the conquest of Porto Ercole by the Sienese in the course of the Fifteenth Century and the consequent annexation to the Republic of Siena, was sent to Porto Ercole the famous artist Lorenzo di Pietro called il Vecchietta to renovate and extend the castle. He added two circular towers, giving the castle a triangular shape. He felt however the need to build a village at the foot of the fortification, so to Vecchietta was ordered to build a "abitevole land size at least as el field of the city of Siena".

Always under the dominion of Siena, in the renaissance period were carried out other upgrading work in 1543 on a project by Anton Maria Lari, that it is inspired by the canons of Baldassare Peruzzi: in this phase were reinforced the walls. After the jobs were directed by Bernardo Buontalenti, which expanded considerably the Rocca, endowed with impressive bastionatore and ramparts and transforming it into a fortification to modern. Furthermore he goes remembered for the construction of the chapel of San Giovanni, a small jewel of the Renaissance, using the former medieval oratory as the sacristy. In the second half of the Sixteenth Century, the entire area of the Argentario became part of the state of Presidii and the fortification was built in the defensive system of the promontory, within which performed the functions of a sighting of defense and offense. In this period the Spaniards commissioned the military engineer Giovanni Camerini as director of works for the restructuring of the preexisting defensive structure, which was further fortified with the strengthening of external fortalice bastionato and cabins for the sentinels; were made even subterranean passages through which had been put in connection the defensive structure at the Palace of the governors.

During the nineteenth century the fortress became a temporary defensive outpost of the Grand Duchy of Tuscany, to pass then definitively to the Reign of Italy. Just after the Unity of Italy began the gradual disposal of military structure, while in 1862 was built the lighthouse of Porto Ercole, a circular plan, at the corner of the rocca next to the tip of the promontory. At the end of the nineteenth century the castle was transformed into a prison, that during the first world war it housed the prisoners enemies. After the second world war the rocca was definitively closed and sold to private individuals who have partly transformed buildings interiors in residential homes, while other environments are municipal property and between them there is the fortress itself where inside it has set up a museum. Between 1954 and 1956 resided there the American writer Robert Penn Warren, which precisely in that period he composed the work with which he won the Pulitzer prize for poetry.

Poderi di Montemerano - 58014, Manciano (Grosseto)
34.27 Kilometers from Spanish Fortress
The Garden of the historic center
in the village of Montemerano, two steps away from the Thermal Baths of Saturnia and from those o...

Via della Penna 1, Castel del Piano (Grosseto)
62.08 Kilometers from Spanish Fortress
Vecchia Osteria Cacio e Vino
Every dish is matched to a particular wine. You can taste delicious local dishes in a friendly at...

Via del Bivio, 16 - 58014, Manciano (Grosseto)
34.39 Kilometers from Spanish Fortress
Trattoria Verdiana
It is a place of simple elegance, where, in winter, you can eat in front of the fireplace and in ...

Via Italia in Montemerano, 31, Manciano (Grosseto)
34.47 Kilometers from Spanish Fortress
= distances as the crow flies