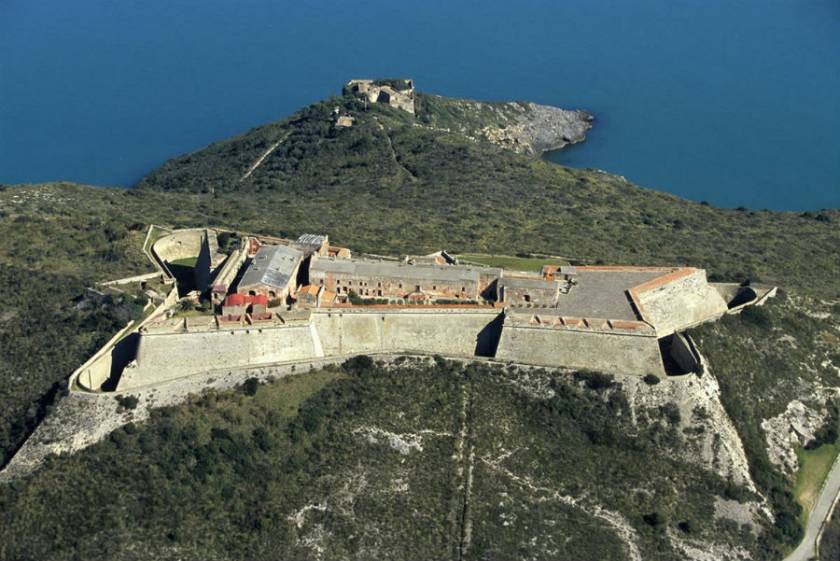 Fort Philip is located on the top of a promontory overlooking from north-east Porto Ercole and the entire bay Porto Vecchio Bay, on Mount Argentario. The current fortification was built by the architect Giovanni Camerini shortly after the middle of the sixteenth century in the place where once stood a tree sighting of the previous era, to implement and improve the defensive system of the State of Presidi. The place chosen by the Spanish for the construction of the defensive complex was formerly the seat of the Fort Sant'Ermo, defensive works realized by the Sienese in the course of the 1400s to enhance the defensive system along the stretch southern territory then administered by the Republic of Siena. With the passage of the entire area in the State of Presidi, the preexisting sienese fortification was not deemed suitable to integrate into the new defensive system: it was thus decided upon its demolition to leave room for the current fortified structure that was erected in 1558. The name was chosen in honor of King Philip II of Spain that commissioned directly the Camerini to carry out the work.

The Forte Filippo presents itself as an impressive fortified complex that develops a quadrangular plan with a fortress that delimits the entire defensive structure consisting of a double curtain walls with massive base shoe creased, which in turn contains a broad and deep moat that divides the outer fortress from the inside. The double walls delimit at each corner a double bastion of triangular shape inside and outside, in addition to a fifth single bastion less that develops a pentagonal plan projecting from the curtain wall outside along the northern side of the complex. In some stretches it has preserved the walkway along the railings of murals of the fortress. The architectural particularity that distinguishes the whole fortress is the asymmetry of the angular bastions, that along the curtains external masonry retain the niches where were placed the weapons of attack and defense active. From northern rampart, a curtain wall separates by putting ourselves at the protection of the connecting path between the fortification and the nearby Torre Del Mulinaccio, while to the east there were links on the surface with the Forte Santa Caterina.

Access to the fortification is from the eastern side of the complex, where an input port round-arched opens at the rivellino entering on the characteristic drawbridge which leads to the second port which opens along the curtain wall inside covered in stone: the latter bears has lowered arch covered with travertine, above which is located a large coat of arms of Spain.

From the wide courtyard are accessible buildings which in the past were used for military functions. They hosted a powder keg, a garrison of first aid, the accommodation of the sentinels and warehouses; among them stands out even the presence of the body of the factory with a single hall of the eighteenth-century chapel of San Nicola. Several buildings are used as dwellings following the restoration work done in the second half of the last century. In some internal environments it has set up a private museum can be visited by appointment.

Via Arenile, 3, Castiglione della Pescaia (Grosseto)
47.81 Kilometers from Fort Philip
The Garden of the historic center
in the village of Montemerano, two steps away from the Thermal Baths of Saturnia and from those o...

Lungomare Andrea Doria, 24, Porto Ercole, Monte Argentario
Vecchia Osteria Cacio e Vino
Every dish is matched to a particular wine. You can taste delicious local dishes in a friendly at...

Località Poggio Bertino, 18, Montemerano, Manciano (Grosseto)
35.99 Kilometers from Fort Philip
Trattoria Verdiana
It is a place of simple elegance, where, in winter, you can eat in front of the fireplace and in ...

Via Italia in Montemerano, 31, Manciano (Grosseto)
34.09 Kilometers from Fort Philip
= distances as the crow flies