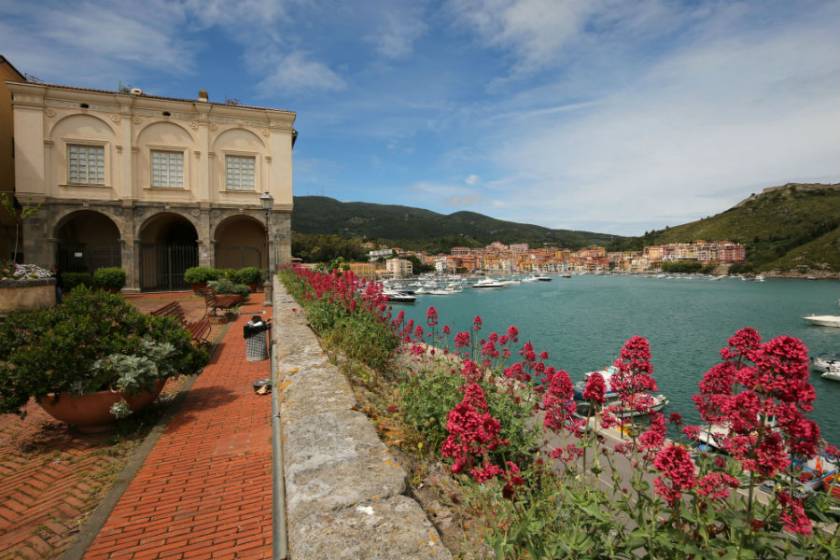 the Governors' Palace of Porto Ercole, on Monte Argentario, was built by the Spanish Government of the State Presidium, which had as its capital the nearby town of Orbetello. The original complex was wider than the present, due to the damages made during the second world war in the rear part.

The Governors' Palace overlooks the scenic square of the village of Porto Ercole, on the opposite side with respect to the bastion of Santa Barbara; in front of the facade is placed on the piazza, a well-cistern of circular shape which in the past was used as water supplies.

The main façade is divided on two levels with ground floor a valuable portico with three orders in late renaissance style attributed to Baldassarre Peruzzi, with three round arches divided by pilasters with capitals flanked by decorative elements floral patterns. Very characteristic is the cross vault that covers the inside of the portico. In the center there is an opening in the wall of the portico, from which it originated the staircase which leads up to the first floor at the top of the building. The latter takes up the stylistic elements of the underlying portico, with a breakdown by three vertical rows, with pilasters which give support to the round arches blind, which delimit spaces in which open the large windows with a quadrangular shape. There are the elements floral ornamental and, above, is present a top crowning prestigious decorated.

Località Pianetti, Manciano (Grosseto)
37.03 Kilometers from Governors' Palace
Il Poggio di Teo
Between the wild nature of the Maremma and the beautiful sea of the Argentario, the Poggio di Teo...

Località Poggio Bertino, 18, Montemerano, Manciano (Grosseto)
36.32 Kilometers from Governors' Palace
Trattoria Verdiana
It is a place of simple elegance, where, in winter, you can eat in front of the fireplace and in ...

Via della Penna 1, Castel del Piano (Grosseto)
61.97 Kilometers from Governors' Palace
Vecchia Osteria Cacio e Vino
Every dish is matched to a particular wine. You can taste delicious local dishes in a friendly at...

Via Italia in Montemerano, 31, Manciano (Grosseto)
34.41 Kilometers from Governors' Palace
= distances as the crow flies