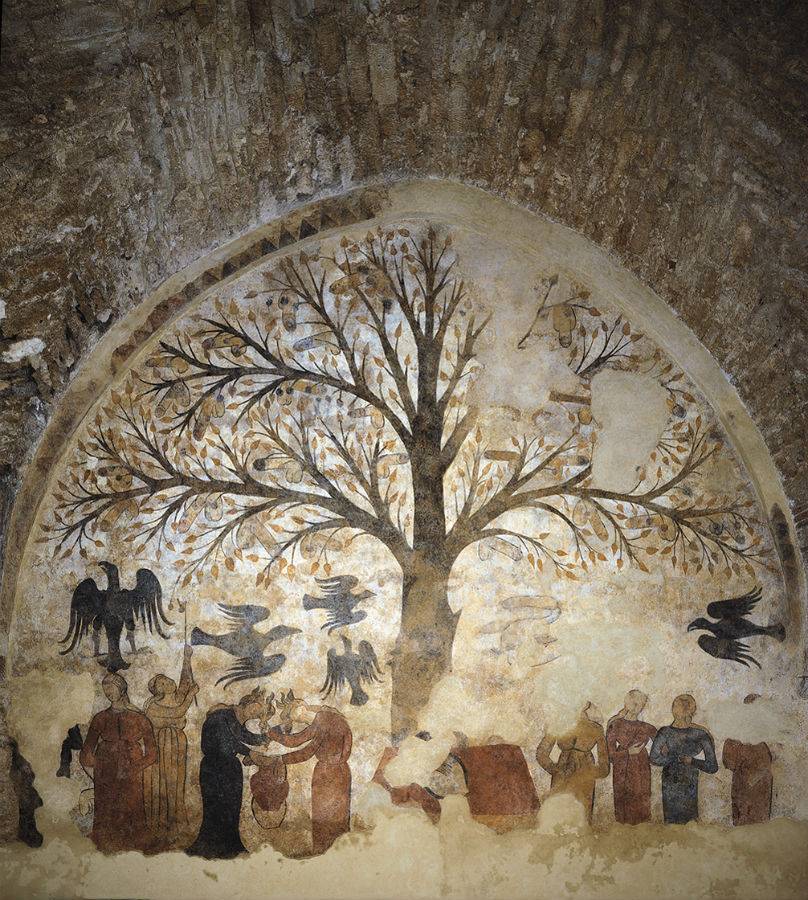 above the Profusion's Source was made subsequently a large warehouse that was used as a public granary. Here the citizens put part of their harvest to which they would be drawn in the periods of famine or war. The structure is composed from the source and from the warehouse was called palace of abundance and today has the shape of a large parallelepiped with three arches on the front facade.

During the restoration happened in 1999 was randomly rivenuto shaft of fruitfulness. It is a fresco decidedly particular, dating back to the period between 1265 and 1335, which has aroused amazement, scandal and surprise: a big tree between whose leaves hang 25 fouls the upstanding male below which two women accapigliano in contending for one of the fouls, black birds circling threatening and other figures of dubious interpretation. This fresco today makes very discuss, there are various interpretations, we here are two. According to the first the fresco is a symbol of fertility. Had to have a function "apotropaic", i.e. augur well for the crops that were always abundant. At the same time however was to avoid the unfortunate possibility of having recourse to the stocks of the warehouse, and then the male organ as a symbol of fertility and abundance and ravens in undermining the precious fruits; while female figures attempt to seize the "fruits" and you accapigliano for tearing them one to the other. For others the fresco would be the first "manifesto" of history. It would be a message of the Guelphs supporters of the Pope against the Ghibellines supporters of the emperor. The Guelfs felt the frequenters of the source, which in the case in which the Ghibellines were returned to power, the latter would spread ideas heretical, witchcraft and sexual perversions. At the time of the fresco (13th - 14th century) in Tuscany circulated legends of witches that cut the penis men to put them in the nests of birds. Would therefore be witches women represented under the tree, a would seem portrayed precisely in the act of adding a foul to the shaft, and the other on the right there are apparently masturbando, finally there is also the eagle heraldic symbol of the Empire.

Probably to unravel the mystery should be traced back to the precise date of manufacture. We know that Massa Marittima was ruled by the Ghibellines until 1266 and the Palace of the abundance was commissioned by the Ghibelline mayor Ildebrando da Pisa. We also know with certainty (by an epigraph present in Palazzo) that the Palace and the new source were delivered in 1265, there are no documentation instead relating to the fresco. In reason of what has been said if the fresco was made within the 1266 shaft of fertility would no doubt be a symbol of fertility, the Ghibelline mayor in fact would never dreamed to denigrate the Ghibellines themselves. If instead the realization is later, between 1267 and 1335, would body the thesis of political manifesto.

Finally, under the source is an ancient tunnel long 256 meters and high on average 190 cm, which can be visited with the accompaniment of an expert guide in caving.

Località Poggetto Masino 169, Suvereto (Livorno)
15.70 Kilometers from Profusion's Source
Agriturismo Gualdo del Re
A family business with a total area of about 40 hectares

Via di Mezzo Franco, 10 Loc.Campese - 58012, Isola del Giglio (Grosseto)
76.04 Kilometers from Profusion's Source
The Garden of the historic center
in the village of Montemerano, two steps away from the Thermal Baths of Saturnia and from those o...

Piazza Canzanelli, 1, località Montemerano, Manciano (Grosseto)
68.43 Kilometers from Profusion's Source
Ristorante Dal Cacini
The good Cacini is a must for those arriving in Val Cornia.

Località Poggio Bertino, 18, Montemerano, Manciano (Grosseto)
67.98 Kilometers from Profusion's Source
Vecchia Osteria Cacio e Vino
Every dish is matched to a particular wine. You can taste delicious local dishes in a friendly at...

Lungomare Andrea Doria, 24, Porto Ercole, Monte Argentario (Grosseto)
77.44 Kilometers from Profusion's Source
Trattoria Verdiana
It is a place of simple elegance, where, in winter, you can eat in front of the fireplace and in ...

Via Italia in Montemerano, 31, Manciano (Grosseto)
68.36 Kilometers from Profusion's Source
= distances as the crow flies