Palace of Checco the Beautiful

What to see in Magliano in Toscana, Grosseto, Tuscany 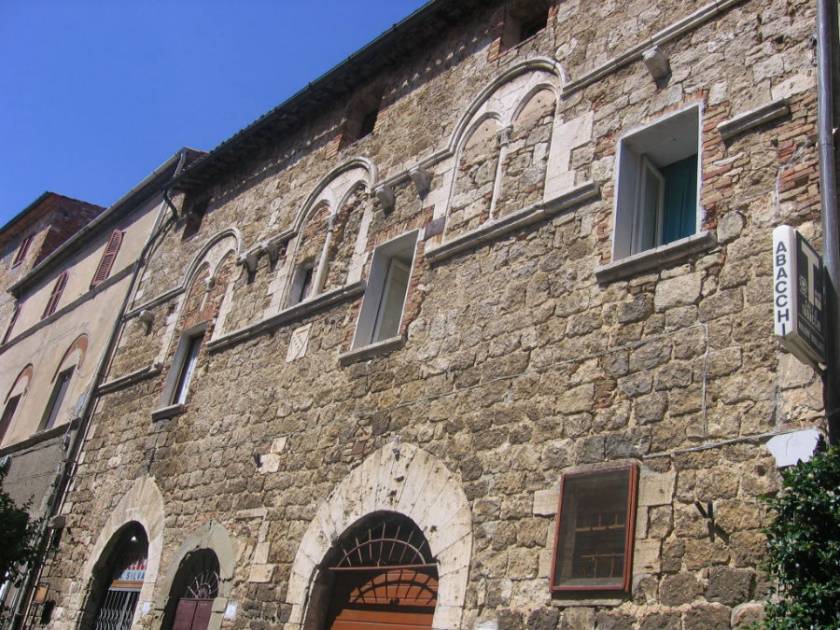 built in the early years of the XIV century, the building was the former residence of the Monaldeschi family of Orvieto and there stayed even the Aldobrandeschi Counts. In the first years of the Twentieth Century there lived a this Francesco Salvi, nicknamed Checco the beautiful, both for its aesthetic qualities and for the fame of Casanova, from which the name with which the building is known today. The Palace was then used in 1911 by Carlo Alberto Nicolosi, author of the book Maremma Tuscany: high and low, on the occasion of his visit to Magliano; today the building is used as a residential building.

The palace stands on the main street of the old village, Corso Garibaldi, not far from the square on which is located the church of San Giovanni Battista. The building was built with the local stone according to the schemes of the gothic architecture of Siena of the XIV century. There are double lancet windows, walled today for a better rationalization of the interior spaces, and frames in travertine local clear. On the facade you can see the coat of arms of the lineage of the Monaldeschi.

Poderi di Montemerano - 58014, Manciano (Grosseto)
4875.22 Kilometers from
Tenuta Il Cicalino
Located at the foot of the medieval village of Massa Marittima, in the picturesque setting of the...

Strada Provinciale delle Rocchette, snc, 58043, Castiglione della Pescaia (Grosseto)
4877.16 Kilometers from
= distances as the crow flies
Vecchia Osteria Cacio e Vino
Every dish is matched to a particular wine. You can taste delicious local dishes in a friendly at...

Via del Bivio, 16 - 58014, Manciano (Grosseto)
16.40 Kilometers from
Trattoria Verdiana
It is a place of simple elegance, where, in winter, you can eat in front of the fireplace and in ...

Località Poggio Bertino, 18, Montemerano, Manciano (Grosseto)
17.73 Kilometers from
Trattoria Verdiana
It is a place of simple elegance, where, in winter, you can eat in front of the fireplace and in ...

Località Poggio Bertino, 18, Montemerano, Manciano (Grosseto)
4878.12 Kilometers from
= distances as the crow flies
Stanghellini Oil Mill
Frantoio Stanghellini, located in Valpiana in Massa Marittima, has been a family-run business for...

The Feast of St. Marco