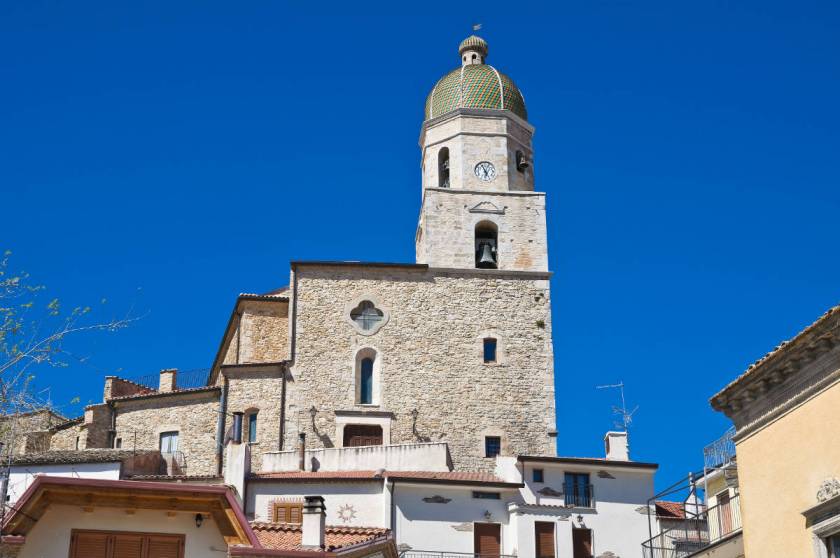 Architecturally valuable, in whose inside are kept refined paintings, polychrome statues and precious marble altars, the Mother Church dedicated to Santa Maria Assunta is the most ancient of Pietramontecorvino, and its construction dates back to the XII century approximately. The first citation documented dates back to the year 1328, but probably the church was built previously, as evidenced by the lateral portal with triple the ogive arch, containing the Agnus Dei. Eighteenth century, instead, are the staircase, the loggia and the port that is located on the eastern facade. The witness of the first constructive nucleus is the ancient presbytery, which currently corresponds to the zone of the main entrance. Four ribs soar upwards, and are reunited in a keystone on which is engraved the dove of the Holy Spirit, by determining a cross vault; the entire part is framed in a gothic arch to all sixth. In the second half of the XVIII century the orientation of the Church was diametrically upside down, because it was felt appropriate to offer citizens an entrance that opens to the new urban development of Pietramontecorvino, who now, determinandosi went outside the walls of Terravecchia The architectural style of the Church can certainly be defined Romanesque in its entirety, while gothic is the entire system of ancient presbytery. The Renaissance chapel, arches made of dark stones in the side niches and funeral monuments, made built by the Diu and Tinto families, respectively in 1564 and 1567. The high altar and the windows of the right wall are instead clearly Baroque. An integral part of the Church Mother is the imposing bell tower of about 30 m., culminating in a dome covered with tiles in majolica of yellow and green. Access is in front of the Baptistery, up a few steps. The quadrangular construction, typical of medieval attitude, spread over four floors. In the upper floors are located beautiful bells, the oldest and largest of which dates back to 1709. Port High was supervised by the bell tower that acted, depending on occasions, from the bell tower or as a protective element, as testified by numerous slits buffered in the masonry and narrow niches among the walls that make us think to guard locations.