What to see in Lama dei Peligni, Chieti, Abruzzo 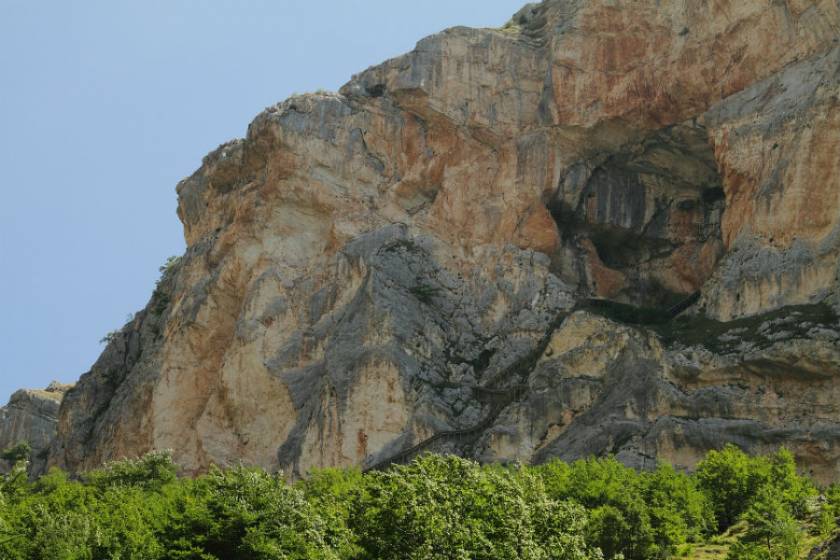 the Cavallone's Cave (otherwise known as the Jorio's daughter's cave) was first explored in 1704 by Jacinto de Simonibus, Donat'Antonio Francischelli and Felice Stocchetti, although the first track of a exploration is the date 1666 engraved, together with other more recent, on a boulder site in the antrum of entry. In 1904 Francesco Paolo Michetti, for the second act of pastoral tragedy the daughter of Iorio of Gabriele d Annunzio, realized the scenography inspired by the antrum of entrance of the Grotta del Cavallone. In the wake of the success of the opera dannunziana the cave was also called the daughter of Jorio and attracted the attention of many visitors, many of which the described in terms fanciful. The cave was used, after the systematic destruction of the country in the course of the second world war, in the winter 1943-1944 which refuge for many inhabitants of Taranta Peligna.

A cableway allows today to reach the entrance of the cave from the road at the bottom of the valley which branches off at about six kilometers in Val di Taranta Peligna. The cableway part in the locality of "Pian di valle" 750 meters a.s.l. and arrives at an altitude of about 1300 meters s.l.m., always in the valley of Taranta. The path inside the cave winds for a kilometer, with the possibility of crossing salt of great interest, in particular for what concerns the first 600 meters; it is here that you notice countless stalagmites and stalactites. It is worth mentioning the "enchanted forest", the "Room of the Elephants" and the wonderful "Pantheon" with its "Hall of Statues". Some of the salient points of the cave were named with dannunziani terms such as the room of Aligi, the hermitage of Cosma or the Angel mute. The speleological system Grotta del Cavallone also belong the grotta del Bue, the cave of the donkey and the grotta del Mulo.

The cave is famous in theatrical literature for being the setting, together with the country of Lama dei Peligni, of pastoral tragedy the daughter of Iorio, written by Gabriele d'Annunzio. The cave in the text has symbolic values and magic because there are hidden lovers Aligi and Mila. The first is a couple of good family, who must marry a woman to him promise, but that s the falls in love with thousand; the latter is in fact a poor canter above which falls the injury of the local peasants, defined a malevolent witch. In fact it is the rush to the factors to be linciata, but Aligi protects, and protects it inside the caves.

Via Porta di Berardo - 67033 , Pescocostanzo (L'Aquila)
17.17 Kilometers from
Hotel Arimannia
The Hotel Arimannia is immersed in the greenery of Caramanico Terme, a few steps from the Thermal...

Via Cappuccini 10, Caramanico Terme (Pescara)
19.93 Kilometers from
La Chiave dei Trabocchi
A perfect location to enjoy the sea of San Vito Chietino thanks also to the private beach

Contrada Portelle 77, San Vito Chietino (Chieti)
4921.10 Kilometers from
B&B Le Zagare
The Bed & Breakfast Le Zagare is located in San Vito Marina, in the locality Portella, in one of ...

Feast of the Holy Child of Lama

Feast of Our Lady of Holy Bodies, in Contrada Corpi Santi