The Basilica Cathedral of Maria Santissima Assunta in Cielo 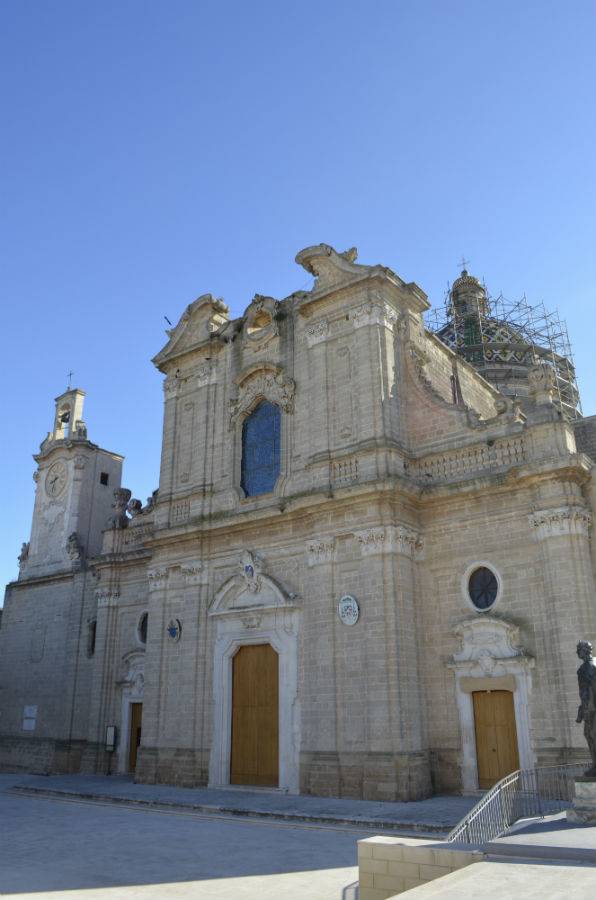 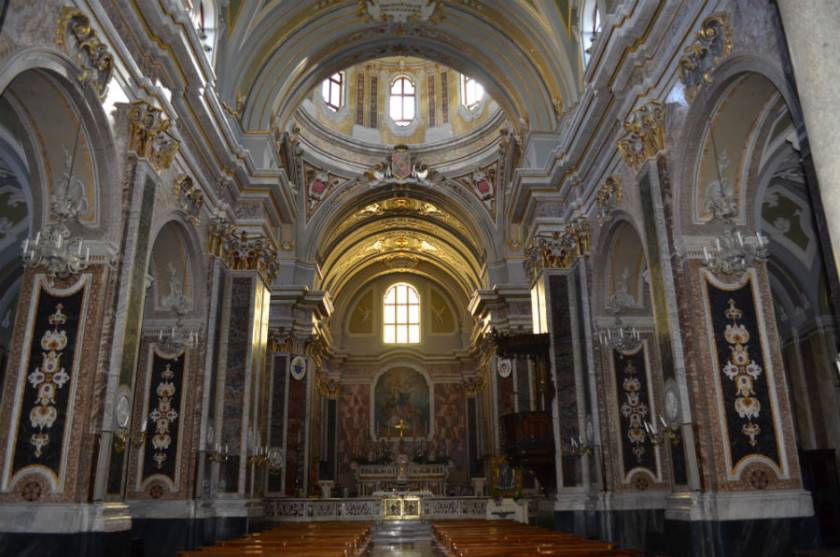 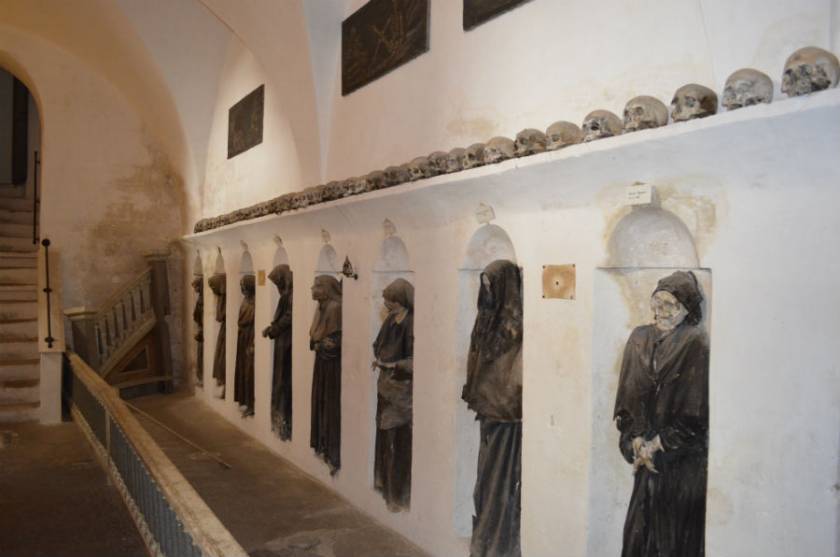 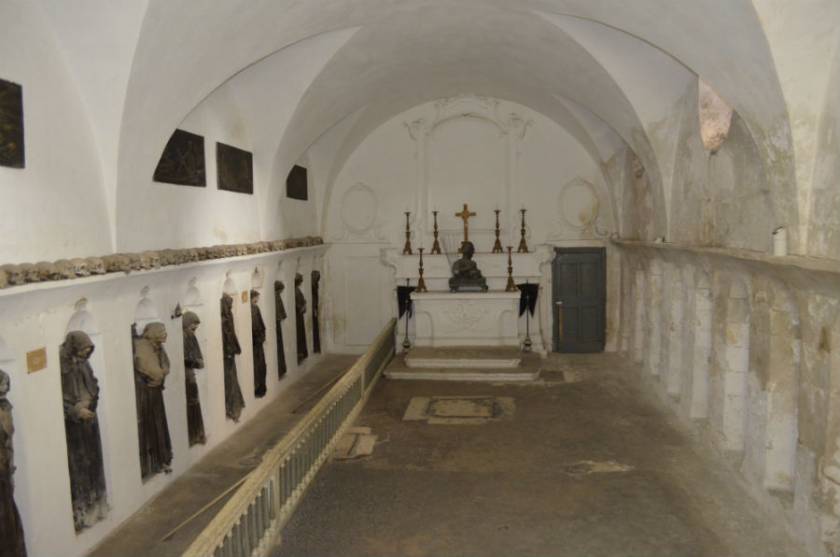 the Basilica Cathedral of the village of Oria, in Puglia, stands on the highest part of the hill of the sieve. It is dedicated to the Blessed Virgin Mary Assumed into Heaven. Designed by Justin Lombardi in 1750 on commission of the Bishop of Oria, Mgr Castrese Scaja that he demolished the old structure in the Romanesque style of the XIII century, unsafe after the disastrous earthquake of February 1743. Two columns of the ancient temple were purchased for eight thousand ducats to decorate the chapel of the Palace of Caserta. The new church, completed by Bishop De Los Rejes, was opened to worship in around 1756. The facade is in local carparo and is rich in trabeations and friezes. To the left stands the clock tower, leziosa lines and slender for its bell tower, and behind it the bell tower. The whole is then dominated by the superb tamburata dome covered with polychrome tiles. Inside has a Latin cross plan is divided into three naves: a structure that has been worth to the church the epithet 'small San Pietro'. You can admire the precious marbles and stuccoes, the four precious chandeliers in bronze of Bishop Kalefati ( 18th century), the two large canvases of S. Tatulli (XVIII century) and the artistic statues, including those of the Saints Doctors of the Venetian school and that of the Patron Saint Barsanofio of Neapolitan school. On the occasion of the recent restoration, came to light some crypts served over the years as tombs of bishops and ossuary. Today it is possible to admire them by performing an excursion in the Hypogeum, where are conserved Archaeological finds and a permanent crib, set in the scenario of the city. The cathedral, at the behest of His Holiness John Paul II, was increased in 1992 to the Pontifical Basilica Minor. Through the Chapel of the Baptistery of the Cathedral Basilica, you arrive in the oratory of the Confraternity of Death, where you can admire the statues depicting the Passion of Christ and some precious paintings of the XVI and XVII century. Through a staircase leads into the "Crypt of the mummies" created in 1484 as a place of prayer and the memory of all those who were not returned from the battle against the Turks in the land of Otranto (1480-1481). After the victory of the war by Ferdinand of Aragon, the son Alfonso ordered a column of crusaders with the purpose to exterminate once for all Turkish hordes remained to plunder the Italic ground. The original name of the column was "Crusaders faith or death", while following the victories was renamed "Compagnia del SS. Crocefisso" first and "Confraternity of Death" then. Inside the crypt there are 22 niches reserved for the mummified bodies of the confreres who made the request, starting from the veterans of the crusade against the Turks. Despite in 1806 Napoleon Bonaparte had issued the Edict of Saint Cloud, which forbade the burials in the churches and the imbalsamazioni, in Oria continued clandestinely practice. In fact, among the ones that have reached up to our days, only a mummy is before the edict, while the others are all due to the subsequent period, up to 1858, as well as studies reveal facts about their bodies. The room in which you will find mummies has a barrel vault and the floor is in beaten earth, on which are placed three trapdoors that allow access to the underground tunnels, which lead up to the tower Palomba. The altar in tuff is embellished by a seventeenth century canvas depicting the Madonna del Carmine with the Child festive and, feet, the holy souls of Purgatory between tongues of fire. Above the niches containing the bodies of the last confreres mummified, there is a structure on which are placed the skulls of those who have died from more time.

Contact The Basilica Cathedral of Maria Santissima Assunta in Cielo

Via Leone XIII, 21, Grottaglie (Taranto)
18.22 Kilometers from
La Nghioscia
La Nghioscia is a lovely vacation home with 3 rooms located in the heart of Grottaglie

Via D'Alessandro, 74023 , Grottaglie (Taranto)
18.41 Kilometers from
Re Sole Resort & SPA
Located halfway between Salento and the Gulf of Taranto, more precisely in Grottaglie, Re Sole Re...

Via Mannara, 57, Grottaglie (Taranto)
18.85 Kilometers from
Masseria Poesia
Situated in a commanding position with a 360-degree view of the Itria Valley, Masseria Poesia off...

Contrada Marinelli, 33 - 72014, Cisternino (Brindisi)
4861.22 Kilometers from
PiGreco Charming Trullo
The PiGreco Trullo is a charming bed & breakfast in the beautiful village of Ostuni

Contrada Lamia Perroni, Ostuni (Brindisi)
4862.04 Kilometers from
Casa Flamì 2
A nice apartment, ideal for a vacation in Ostuni, consisting of a bedroom and a kitchen equipped ...

Contrada Cervarolo, Ostuni (Brindisi)
4859.29 Kilometers from
= distances as the crow flies
La Locanda del Ristoro
Starters, orecchiette and meat dishes stand out between all the courses.