What to see in Offida, Ascoli Piceno, Marche 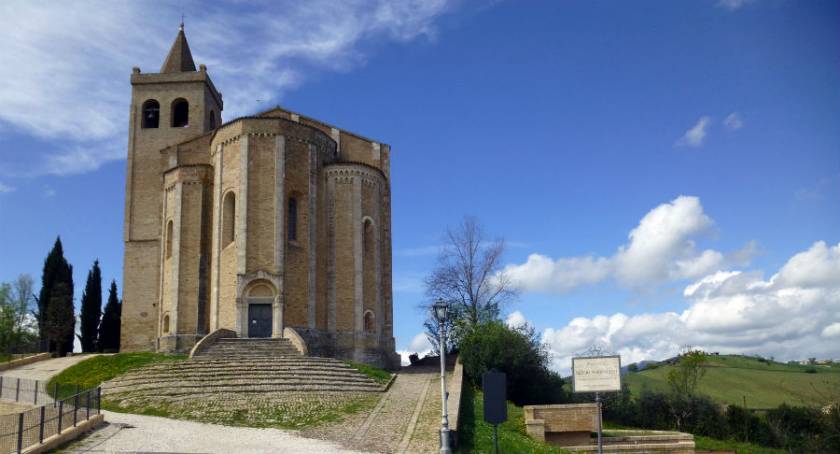 the Church of Santa Maria della Rocca is a fourteenth century church in the western border of the village of Offida. Surrounded on three sides by cliffs that open on two valleys, the great construction in brick in the Romanesque-gothic style you must master Albertino that erected in 1330 on pre-existing small benedictine church. The facade, turned toward the outside of the inhabited area is divided by pilaster strips and on the opposite side there are three high polygonal apses with pilasters of white stone, single lancet windows and gothic arches. On the central apse opens a gothic portal that introduces in the crypt (a 3 then 5 naves), as wide as the upper church and adorned with frescoes attributed to the Maestro di Offida. The upper church, with a single hall according to the tradition of the mendicant orders, preserves frescoes of the Giottesque influence, still attributed to the Maestro di Offida (those of the transept are dated from an inscription to 1367) and other attributed to Giacomo da Campli (XV century). Part of the original decorations are lost even for the deterioration of the cover. In the side altars, erected in different eras, it should be noted that dedicated to Sant'Andrea, of the XV century, with blade frescoed on the wall by Vincenzo Pagani.

During the advance of the allied troops, between 16 and 18 June 1944 some military Germans had completely undermined the church so that the rubble were a hindrance to the allies, but none of the thirty exploded mines and the inhabitants ascribed the episode to a miracle of the Virgin. On the left side of the first staircase that leads to the church is represented a sheep that eats a clover leaf; the popular belief that if there is positioned above, by sliding backwards along the staircase, with closed eyes, the expressed desire will be fulfilled.