At the Becjarie in the village of Valvasone, in Friuli Venezia Giulia Region, there is always an air of celebration. A beer, the grid that spreads in the air the intense smell of grilled meat, laughters, small talking and the joy profused from whom works meats literally from a life. Daniele Comuzzi, art son of a buthers family since 1730 (native from Rivignano, will first move to Bertiolo before arriving at Valvasone to seize the opportunity of an activity slide), brings forward his traditions with enthusiasm and pride, reinventing it as soon as he can. Raffaele Cesarini instead is a butcher for passion, born in a family that always held the pig in the house, and even this is tradition.

They know each other in 2006, the day of Santa Lucia, ten years exactly ago, in a company where they will work together for several years. Raffaele take advantage right from the start from the professional knowledge of Daniele, and Daniele sees in him a guy with passion for butchery and the untamable love for the work, and since now they become a great teamwork and of course inseparable friends. So they decide (stew of working poor meat) to accept the proposal to rent a butcher shop in society, that they'll call Becjarie (butcher shop in Friulian language).

The shop becomes immediately a point of reference for quality meat lovers, and the results arrives, so they take courage, pushing their work more and more toward the ideas that had driven them to open it to realize their professional dream: to create a quality chain on their own, thanks to a network of collaborators and trustworthy suppliers, thereby also performing fresh and seasoned charcuterie tradition. But the Becjarie does't stop here: in fact a new shop will be ready in April 2018.

The two friends have decided to detect the Valvasone former social dairy, a historic building in Via Roma which was the seat of one of the most important realities of the territory and before its doors has been closed permanently in 2008, boasted more than a century of activity. A piece of social history and a world that unfortunately has finished. From the old architectures Becjarie won't touch the historic facade, in memory of that symbol and that world coming from their grandparents. The interiors instead, formerly divided into many small locals, will completely revolutionised, to give life to a space where to extent their passion and their genuine vision of the work.

Once walls and facade will be consolidated, the rest of it will be pure Becjarie: a large exhibition space for the many products prepared every day with care will be exposed in a traditional counter (well 12 meters), refrigerated display units and some shop windows, where a small space will be given also to the typical products of the territory, as the wines (especially) but also a wide choice of local cheeses. The rest of the space will be devoted to the one that represents the pride of the two owners: a space where they will share with customers, friends and family their passion and their work. Some tables will be staged, always dressed, where the patrons will soon involved you in tastings of salami, cheese, small grilled specialities, all accompanied by excellent local wines. A place where the conviviality, the joy and the authenticity of the dream brought forward by Daniele and Raffaele will become more concrete and defined. This and much more awaits you in the new premises of the Becjarie.

The good meat must have a whole chain of attentions linked to animal welfare, food quality, breeding techniques, timings of growth, slaughtering and everything it follows up, maturation, seasoning and the final product process. The products of most importance are represented by their 'ready-to-cook' specialties (as they say), among which we find their inventions, such as the Black Steak, the Crüt of Voleson and the cocoa gorge in addition to their traditional salami.

The Black Steak was born in honor of Daniel's niece, who wished from her uncle a special creation for Halloween.There are always people at lunch time at the Becjarie. Daniele and Raffaele always eat something on the fly and often relatives and friends they reach them. "What can you do for Halloween!? A black steak!?". And here's the idea: to combine traditional spices, used for the marinade, and cocoa, in such a way the meat takes on a dark color. After that, realizing the cocoa gorge (this time a marinated cheek lard) has been a breeze.

But the most striking example of how the art of buthcery can marry the wildest imagination is the Crüt of Voleson, a curious sausage created by pork loin steak, with all its fat, marinated in traditional spices and seasoned raw. The Becjarie jealously guards the history of this unique salami which tells of a glutton Count, a friendly hunter and its friendship with a pig. If you come visit Daniele and Raffaele to their new Becjarie let them tell you the story: they will be happy to praise it once again while they offer you a slice.

But also all the other products of Becjarie are made with true passion. Starting from the traditional salami (Salame, ossocolli, stretched or rolled bacon, suppressed, lard, lard with bacon, cheek lard, cocoa throat) and many other 'ready-to-cook' specialties (long cooking zampone, pork, turkey or chicken with artichokes and sweet peppers; stuffed peppers, about a dozen types of hamburger meats, sandwiches, arrosticini, meatballs, polpettone and heart-shaped tacchinella or chicken roasts. And finally, the bench butcher with all high quality meat cuts.

So you will find yourself magically in company of two friends, available to chat and drink a glass of good Refosco red wine that's always ready for the occasion. 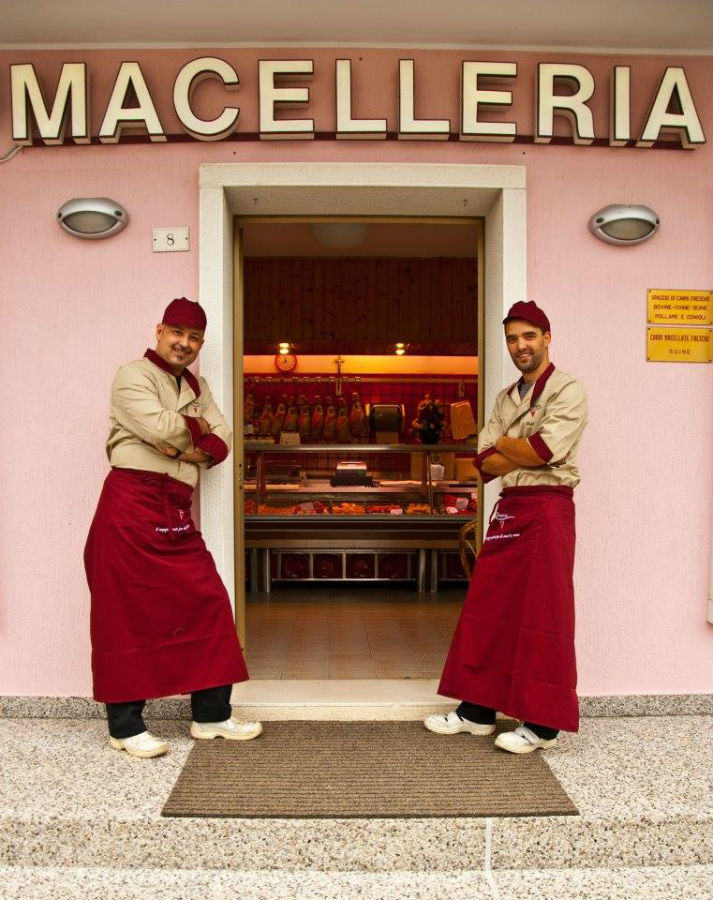 Via Cesare Battisti, 4, Valvasone
B&B La contrada
The Bed & Breakfast La Contrada, in the heart of the village of Valvasone, is immersed in a frien...

Vicolo Monte Santo, 1, Valvasone
La Becjarie
Daniele and Raffaele of Becjarie of Valvasone, in Friuli, are waiting for you to make you taste t...

What to see in Valvasone

Church of the Holy Christ's Body
More...
are you an Italian villages lover?
Join our Community
and share you experiences!

The advices of e-borghi for an Easter weekend w...
The Relais La Loggia of Gradara and its innovat...
Hotel Sole - La Fenice. Yesterday, today.. but ...
More...