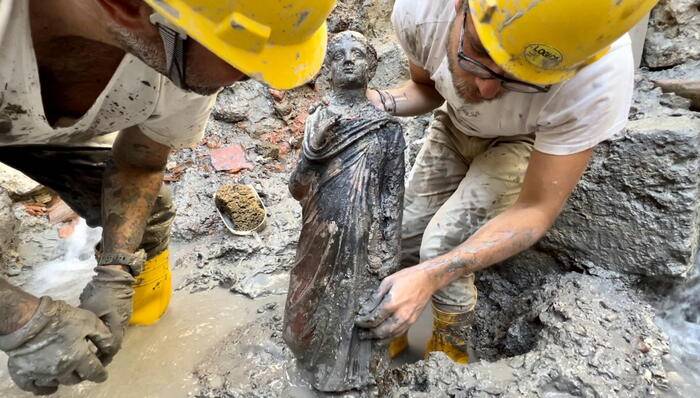 Incredible discovery in Tuscany: during archaeological excavations at the Roman sanctuary in San Casciano dei Bagni, 24 bronze statues, as well as numismatic finds and plant offerings, have emerged from the earth.
What has already been called one of the most important archaeological discoveries since the day the Riace Bronzes were discovered occurred during excavations inside a Roman sanctuary in the province of Siena, which was only discovered in 2021 and where a team of archaeologists has been working tirelessly for weeks.

Archaeological work has unearthed all the bronze statues in an excellent state of preservation. The artifacts, which are small in size (the five largest measure about one meter in height), are a real treasure trove for Italian archaeology, according to archaeologist Jacopo Tabolli, of the University of Siena.
Along with the statues, coins from the period, vegetable offerings (the area was in fact a votive deposit) and Latin and Etruscan inscriptions were also found. The latter findings are, according to the experts in charge of the excavation, particularly interesting. 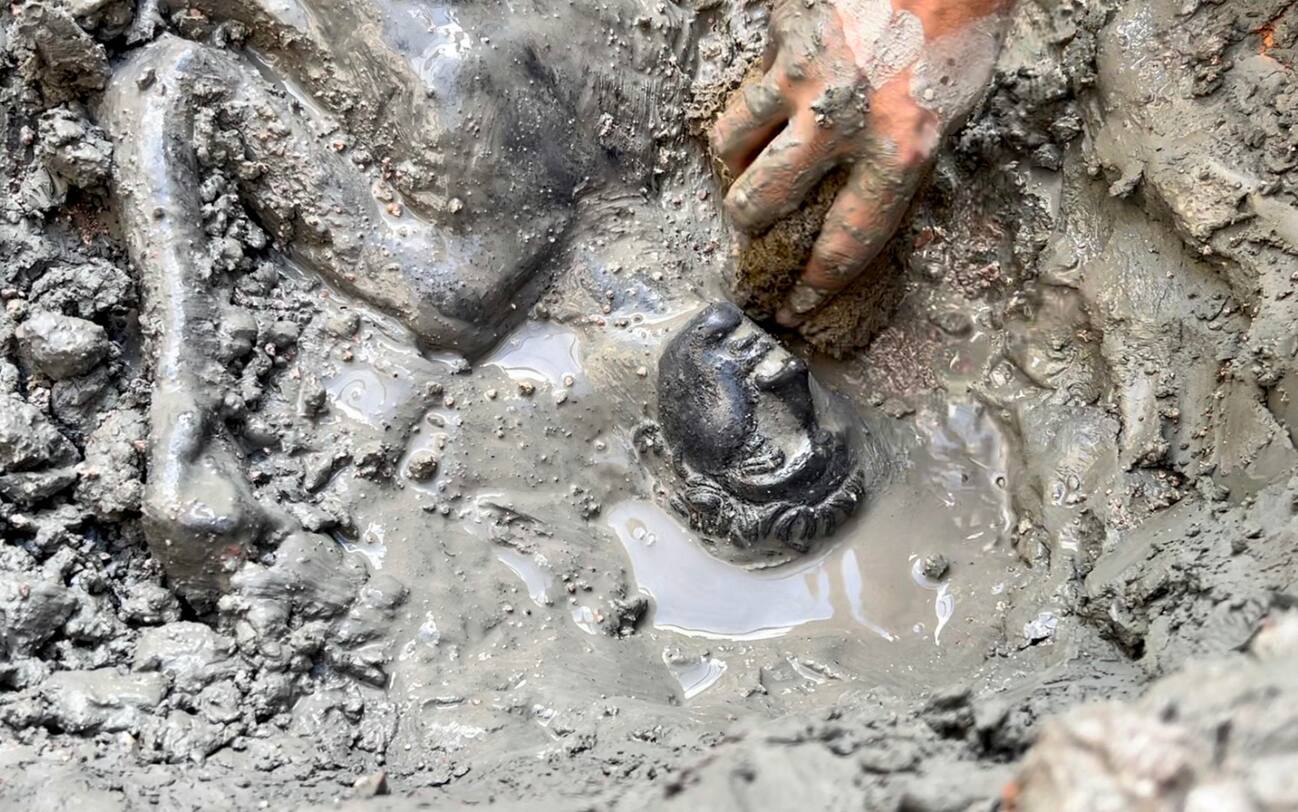 They are in fact a demonstration of the historical and territorial coexistence of two cultures, the Etruscan and the Latin, which seemed to coexist without friction.
While excavation in the sanctuary has stopped, as usual during the winter months, restoration of the works has already begun inside the San Casciano dei Bagni workshop.

Sixty experts, archaeologists and historians from around the world are already working to restore and study the statues and their significance. 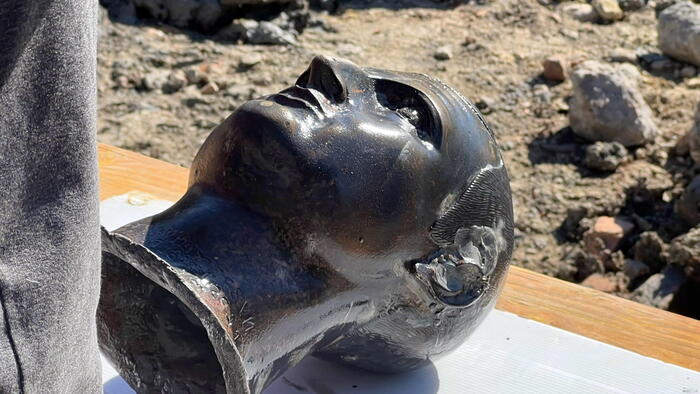 Matrone, emperors, children: what is the treasure of San Casciano dei Bagni

The statues, according to Tabolli, represent matrons, emperors, and children all belonging to the territory's noble families and Roman and Etruscan culture, but also deities such as Apollo and Hygea. These are representations of votive offerings, forms of popular prayer that asked the deities for miraculous intervention for their health and that of their families. But there are also bronze representations of human body parts, organs, affected by disease or deformity and for which divine intervention was sought. 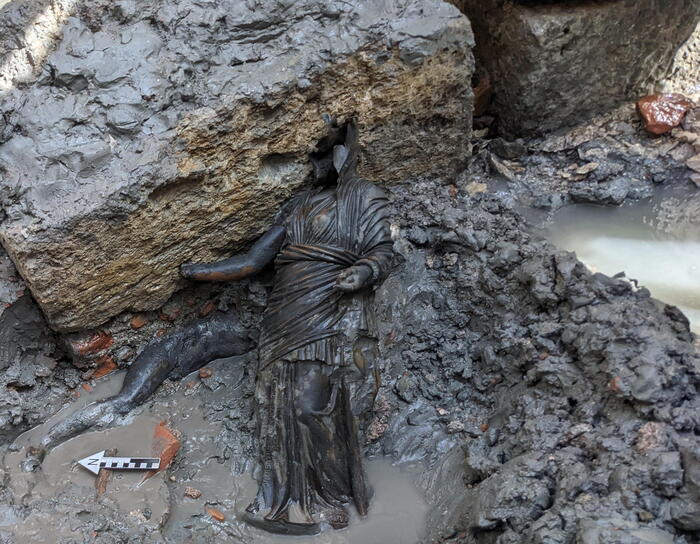 Remained guarded by the earth and mud for some 2,300 years, the Etruscan statues of San Casciano dei Bagni have been perfectly preserved thanks in part to the presence of water from the sanctuary's sacred pools, which has helped to preserve all the artifacts in optimal condition.
The statues were shaped, Tabolli continues, by the skilled hands of local artisans, probably in a time frame between the second century B.C. and the first century A.D. 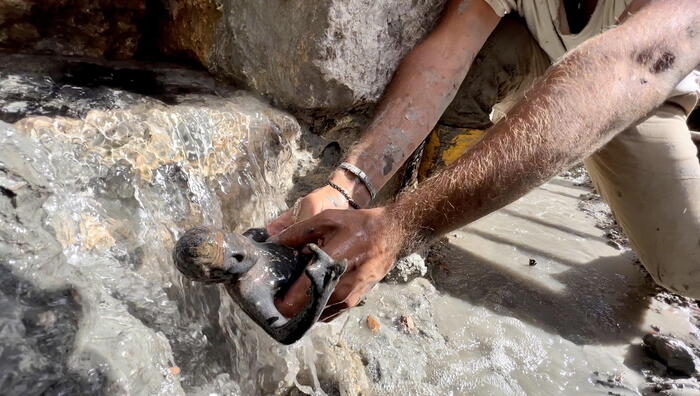 According to excavation director Emanuele Mariotti, who has followed and supervised the search and recovery operations for fourteen weeks, these findings exceed all expectations, due to the richness and state of preservation of the treasure found among the San Casciano grounds. It is a discovery that will rewrite history, according to Tabolli and his team, who have been working on the excavation since 2019 also thanks to the financial support of the municipality of San Casciano dei Bagni.

Culture Minister Gennaro Sangiuliano wanted to visit the Tuscan workshop where the works are located, with a message of joy for the archaeological discovery. "Italy can enjoy a stratification of epochs and great civilizations that have succeeded one another in the peninsula," the minister argued, congratulating the archaeologists who carried out the excavation of the discovery.

Massimo Osanna, the general director of museums at the MIC, spoke instead of "a more important discovery since the Riace Bronzes." A 'statement that gives an idea of the importance and resonance that the discovery represents for Italian archaeology and culture.

Agnese Carletti, mayor of San Casciano dei Bagni, does not hide her happiness. In her opinion, it is a discovery, that of the excavation, which "offers San Casciano an opportunity that is not only cultural and touristic" but also an opportunity "of rebirth." In fact, for the small Tuscan town, which was already part of the circuit of Italy's Most Beautiful Villages, the discovery represents a chance for a rebirth (tourist, but also artistic and cultural), which gives new life to the medieval village.

The future of the bronzes is to enrich the exhibition inside a historic palace located in the center of San Casciano, purchased ad hoc to house the new Tuscan treasure, where the other votive objects found in the excavation will also be collected. And, like the Riace Bronzes, this extraordinary discovery may also become the symbol of an area rich in history, culture and memory of the past. 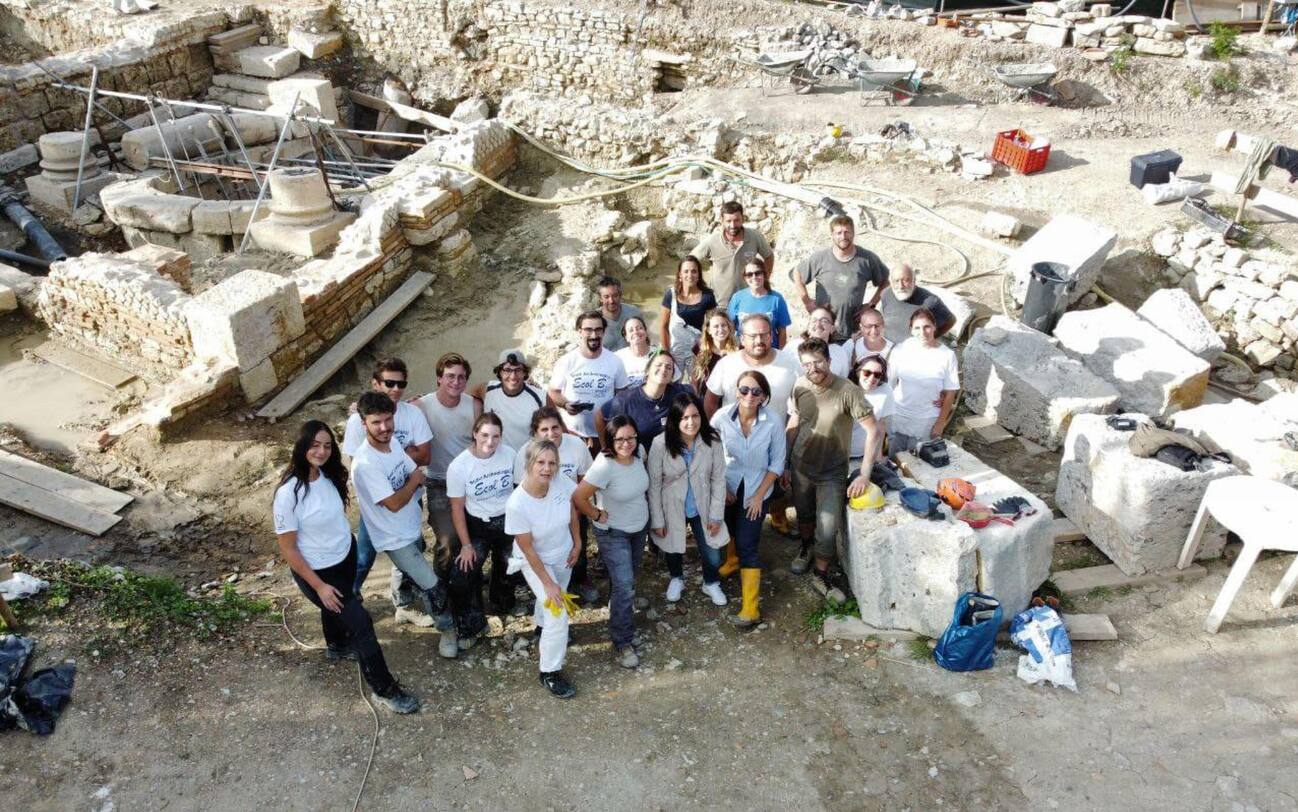 What to see in San Casciano dei Bagni

Collegiate Church of SS. Leonard and Cassia
More...
are you an Italian villages lover?
Join our Community
and share you experiences!