The wonder of the lands of Prosecco, a UNESCO World Heritage Site, a stone's throw from Treviso. Among churches, villas and ancient wool mills. 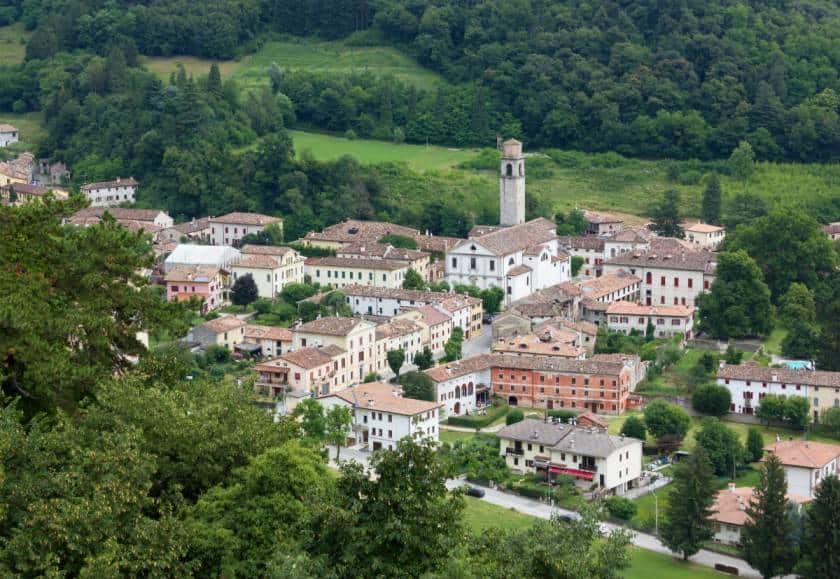 The Prosecco lands have recently become UNESCO world heritage sites. They are one of the most extraordinary vineyard areas in the world, hills stretching between the great Venetian plain and the Dolomites, an area of ​​vineyards and cellars, hard-working people and bottles that have made and make the world dream.
Pieve di Soligo, Follina and Cison di Valmarino are some of the villages of this noble land, appreciated and, today, rightly rewarded, to which we have dedicated a weekend.
Starting from the beautiful Treviso, an important center of the northern Veneto plain, rich in religious and civil architectural emergencies and home to interesting museums, we reached Pieve di Soligo.

Land of Prosecco, Pieve di Soligo is told among its vineyards and cellars but also through its architectural richness, its history. With a largely flat territory but also, for its part, hilly, Pieve di Soligo is bathed by the rivers Soligo and Lierza, and offers a rich artistic and religious heritage.

The main architectural emergency is the Cathedral of Santa Maria Assunta, in neo-Romanesque style, dating back to the early 20th century. From the façade to the salients, it is dominated by five characteristic pinnacles. Valuable the altarpiece kept inside, dating back to 1540 and made by Francesco da Milano and representing the Assumption of the Virgin.

Leaving Pieve di Soligo we reach the nearby Follina, an active tourist village and lively artisan center. The heart of the village is the abbey of Santa Maria, an ancient Cistercian monastery and an important cultural hub, in an area of ​​mills for millstones and wool mills. With its façade in Cistercian Gothic style, it contains treasures such as the baroque wooden crucifix and a precious fresco by Francesco da Milano dating back to 1527. The bell tower in Romanesque style is also valuable.

To see the cloister with its elegant Gothic characters on which some of the most important rooms of the abbey overlook, the Parlatorio, the Refettorio, the Sala del Capitolo and the Library. The Abbot's Cloister can also be appreciated.

The processing of wool in Follina, an important local activity, would seem to have been carried by the monks of the abbey. As evidence of the history linked to this activity there are some elegant historic buildings of the village, including Barberis palace, built by Francesco Fadda, who in the second half of the seventeenth century combined the production of the finest fabrics, the wool mill Andretta, dating back to the production of wool. in the first part of the nineteenth century, and the eighteenth-century Lanificio Paoletti, the only manufacture of centuries-old tradition still operating.

The Serica della Marca, a supplier of fabrics and yarns to the most prestigious fashion brands, dates back to 1870.

The third stop of the weekend is Cison, located along the Prosecco route, which has in the township of Rolle one of the best places for producing Prosecco docg.
An ancient political and administrative center of the county of Valmareno, the village of Cison was guarded by the Brandolini castle, a fortified Caminese complex (12th century), which has the elegant façade of a Venetian patrician residence, with double-order mullioned windows and three-light windows.
The Piazza Barbi is overlooked by the Barbi palace, a Venetian villa now the Town Hall, and the Loggia, built in the mid-seventeenth century to house the court, and today a theater.

Other treasures of the village are the Brandolini cellars, the eighteenth-century archpriest church of Santa Maria Assunta.

Beautiful the flow of water into the built-up area, thanks to a path called "le vie dell'Acqua" which, running alongside the Rujo stream, winds through the woods to reach old mills and other hydraulic works, valuable examples of industrial archeology. Also interesting are the hamlets of Cison, from Tovena, a rural village of stone houses with the eighteenth-century fountain, the church of Santi Simone and Giuda and the Magagnin house, a typical stone house, which bears three murals of the eighteenth century on the facade. Then the hamlet of Mura, and then Rolle, surrounded by wooded hills and the vineyards of the Prosecco, with the wash houses and the troughs of the Rosada.

Not to be missed in the area is the Strada dei Cento Giorni, an ancient Austrian work built for war purposes, one of the most extraordinary works of engineering. Traced on a Roman path, it preserves a lookout tower from the Byzantine era, and in the past it was crossed by merchants and travelers, shepherds and pilgrims. In 1914 it began the construction, interrupted in 1916, of the first section of the current route, designed by the engineer Giuseppe Carpenè. During the First World War, strategic reasons led the Austrian engineers to complete it quickly. By mid-June 1918 it was ready, after only a hundred days of work. At the top of the San Boldo pass that leads into the Belluno area, there is the museum that documents its construction.

This corner of Veneto is a land of wine but also of good food. Whoever arrives in these parts must absolutely taste the spit, a local specialty. A good dish of meat cooked on a spit, to be served hot and crunchy, to be served with a good potato dish is the umpteenth marvel of the land of Prosecco.

B&B Four Winds
Ideal destination for nature lovers, trekking on foot or horseback and mountain biking in the hea...

What to see in Pieve di Soligo