Treviso: a weekend between the villages of Cison di Valmarino and Follina

In the lands of Prosecco to discover two of the most interesting villages in the north east of Italy. Between villas, beautiful religious buildings, ancient wool mills and grilled meat. 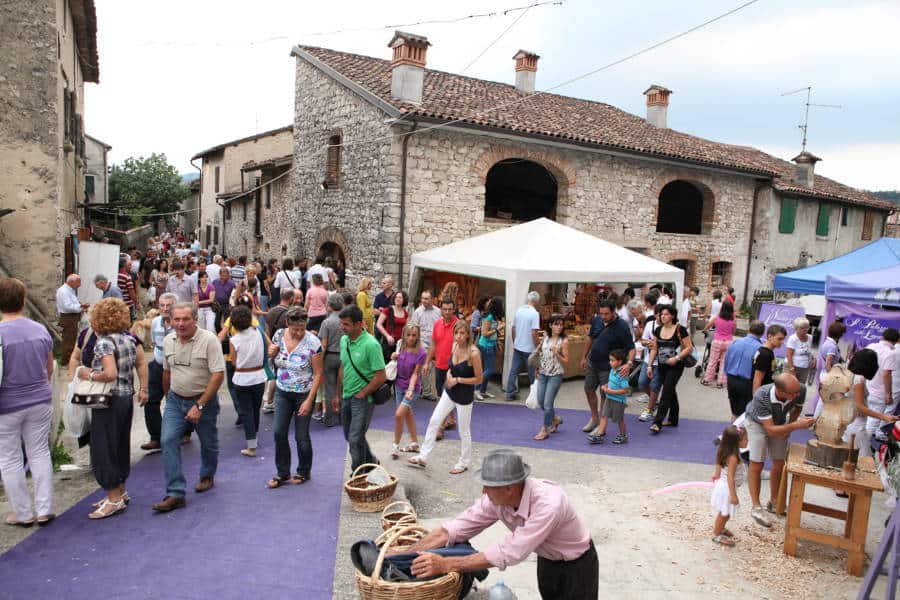 It is from Treviso, an important center of the Venetian plain, rich in religious and civil architectural emergencies and home to numerous museums, which begins our itinerary in the Trevisan lands to discover the villages of Cison di Valmarino and Follina.

It is with the A27 motorway, which touches the main towns of the Marca Trevigiana, which we reach Valmareno, the valley between the Belluno Prealps and the hills of the high Trevigiano, which from Vittorio Veneto reaches Follina following the course of the river Soligo, affluent of the Piave.

A few kilometers divide Vittorio Veneto from Cison di Valmarino, which we reach after having flanked two stretches of water, the lake of Santa Maria and the lake of Lago, or San Giorgio, separated by a marshy area.

Cison, located along the path of Prosecco, has in the village of Rolle one of the best places of production of Prosecco DOCG.

Former political and administrative center of the county of Valmareno, the village of Cison is guarded by the castle Brandolini, a fortified complex of the Caminese era (12th century). Commissioned by Count Antonio Maria Brandolini, it presents the elegant Venetian patrician facade, with double and triple mullioned windows.

In the historic center is Piazza Roma, overlooked by the Barbi palace, Venetian villa now the Town Hall, and the Loggia, built in the mid-seventeenth century to house the court, and today theater, then the Brandolini cellars, example of correct building recovery historian. The archpriest church of Santa Maria Assunta is an eighteenth-century jewel with a double façade: that of the main entrance to the west, adorned with three nineteenth-century statues by Marco Casagrande depicting Faith, Hope and Charity; the one to the east overlooks Piazza Roma and presents in the center the statue of the patron Saint John the Baptist and on the sides, arranged in pairs, Prudence and Justice, Fortress and Temperance. The interior with a single nave houses the "Assumption of the Virgin" by Egidio Dall'Oglio and a precious organ by Gaetano Callido of 1779. Beautiful are the angels-sculpture of the altar, the eighteenth-century paintings of a pupil of the Piazzetta, as well as outside the church, the other Venetian palaces that make the village precious. 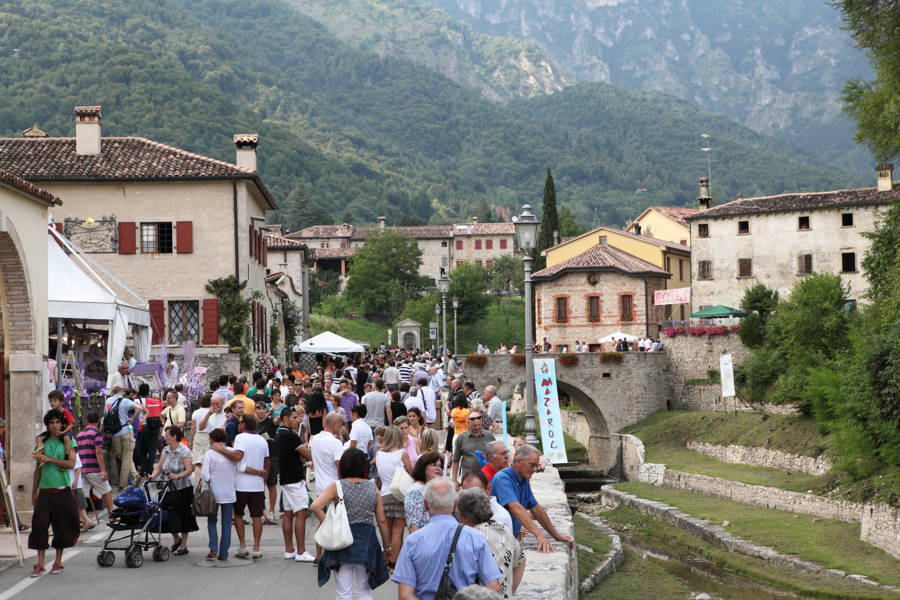 Water flows through the village, thanks to a path called "le vie dell'Acqua" which, running alongside the Rujo stream, winds through the woods to reach old mills and other hydraulic works, evidence of industrial archeology. You can not leave Cison before you have made the tour of its hamlets, from Tovena, rural village of stone houses with the eighteenth-century fountain, the church of Santi Simone e Giuda with the triptych of the high altar of the late seventeenth century and the three minor altars entirely carved and gilded; the ancient rectory with the coats of arms of the Brandolini and of the bishop Pietro Lioni; then Casa Magagnin, a typical stone house, with three mural paintings dating back to the eighteenth century. The village of Mura, and then Rolle, is surrounded by wooded hills and vineyards of Prosecco, with the Rosada wash houses and drinking troughs. Vineyards, fruit trees and farmhouses, this is the landscape that frames the village, an extraordinary fresco of this corner of the Veneto province. 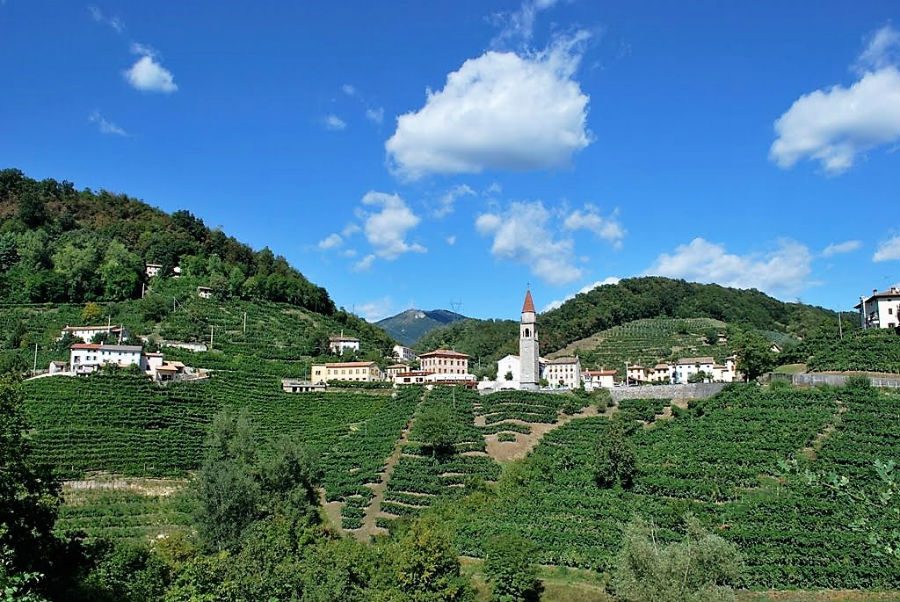 Land of excursions and walks, it has in the Strada dei Cento Giorni, an ancient Austrian opera built for war purposes, one of the most extraordinary works of engineering. Traced out on a Roman path, it preserves a watchtower of the Byzantine era, and in the past it was crossed by merchants and travelers, shepherds and pilgrims. In 1914 the construction, interrupted in 1916, of the first part of the current route, was started on a project by engineer Giuseppe Carpenè. During the First World War, strategic reasons led the Austrian Genius to complete it quickly. In the middle of June 1918 it was ready, after only a hundred days of work. At the top of the San Boldo pass leading to the province of Belluno, there is a museum that documents the phases of the project.

The spit is definitely the specialty of Cison di Valmarino and the foothills of the province of Treviso. Such cooking is perhaps one of the oldest cooking methods. We offer a dinner of cooked meat on a spit served hot and crispy, accompanied by a plate of potatoes.

The second stop of the tour is Follina, an active tourist and cultural village, and a lively artisan center. It is the abbey of Santa Maria, an ancient Cistercian monastery, its heart, an authentic architectural marvel. From the Cistercian Gothic facade there are four Gothic lancet windows and two rosettes. It houses treasures such as the baroque wooden crucifix and a precious fresco by Francesco da Milano dating back to 1527.

In Romanesque style it is instead the bell tower, another element of the architectural complex of the abbey. Not to be missed is the cloister with elegant Gothic features, on which some of the most important rooms of the abbey, Parlatorio, Refettorio, Sala del Capitolo and Biblioteca overlook. Also worth seeing is the Chiostrino dell'Abate.

Abbey that for over two centuries was an important junction of Cistercian culture, in this area of mills for millstones and wool mills.

Wool processing that seems to have been brought to Follina by the abbots of the abbey, an important activity in the village witnessed by some elegant historical buildings of the village from Palazzo Barberis, built by Francesco Fadda, who in the second half of the seventeenth century joined the wool production production of more refined fabrics, at the Lanificio Andretta, dating back to the first part of the nineteenth century, to the eighteenth-century Lanificio Paoletti, the only tradition-old manufacturing still in operation. On the other hand, Serica della Marca dates back to 1870, a supplier of fabrics and yarns to the most prestigious fashion brands.

Even in Follina we give ourselves a skewer of meat accompanied, this time, mushrooms, and we do not miss a taste of Prosecco, beautiful wine of this corner of Veneto, before returning to the plains, for the beautiful Treviso.

B&B Four Winds
Ideal destination for nature lovers, trekking on foot or horseback and mountain biking in the hea...

What to see in Cison di Valmarino

Vintage Radio Museum
More...
are you an Italian villages lover?
Join our Community
and share you experiences!