In the lands of the river Tagliamento, between historic buildings, countryside, a plate of polenta with muset, a plate of gnocchi with goose and a taste of Spaccafumo. 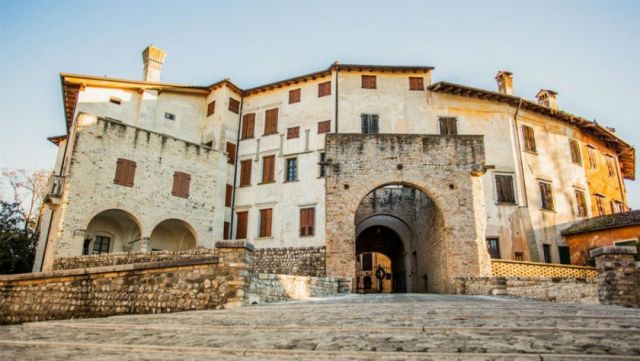 It is from the heart of the Friulian lands that this itinerary of art and culture starts between the plains and the mountains.

We leave the city of Pordenone and go along the state road 13 to Casarsa della Delizia and then continue, through the countryside, along the provincial road 1 up to Valvasone Arzene, where people speak the western Friulian, the first stop on our itinerary in the west lands of the Friuli, lands of waters and countryside.

Its delightful urban center has developed on the right of the Tagliamento river, near an ancient ford. To see, in the market square, the Palazzo Comunale, an elegant building with an eighteenth-century appearance that incorporates old medieval structures and the Martinuzzi-Dulio palace with a Venetian Renaissance imprint.

Beautiful also the scenic eighteenth-century facade of Palazzo Fortuni that stands in front of the church of Saints Peter and Paul that preserves the frescoes of Pietro da Vicenza.

Then the eighteenth-century Palazzo Pinni and the wide Piazza Libertà on which stands the cathedral, consecrated at the end of the fifteenth century, with a fine facade of the late nineteenth century and the interior embellished with two seventeenth century altarpieces and one of Friuli's art treasures, the organ of Vincenzo de Columbis, the only Venetian sixteenth century organ still existing in Italy. 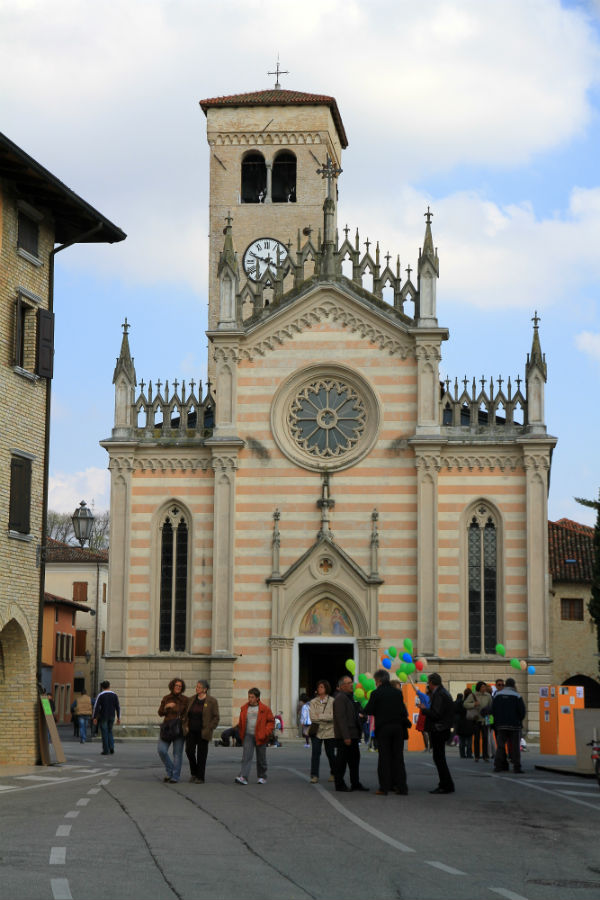 To see Palazzo Flora and the Renaissance house of the Pieve that incorporates the fourteenth-century chapel of San Giacomo, with near the seventeenth-century flyover on the water of the canal. Then Trevisan house, and the castle, a vast complex with a beautiful hall on the ground floor decorated with friezes of the sixteenth century where there is a delightful 18th-century theater. 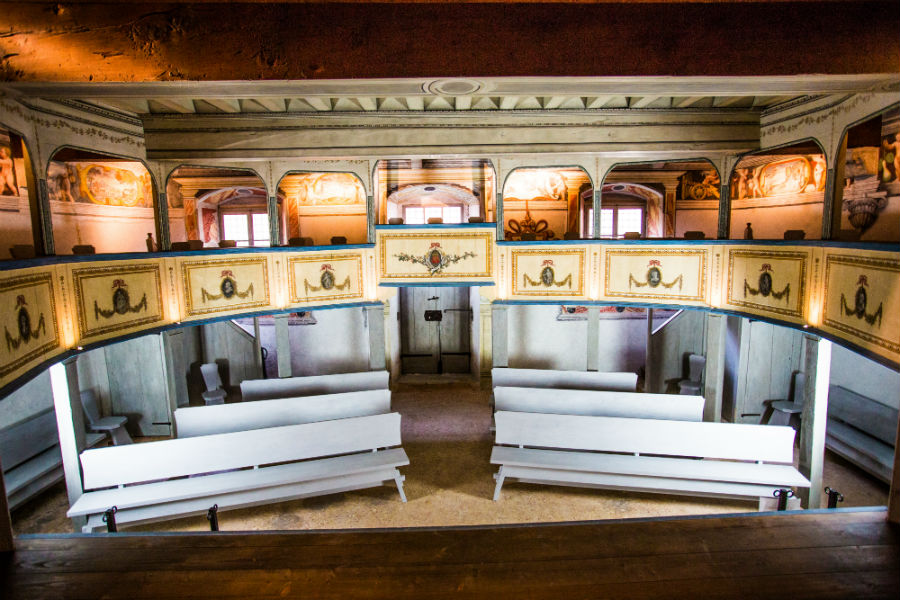 Do not miss a gluttonous stop in one of the restaurants of the village to enjoy a good dish of polenta with the muset, the typical Friulian cotechino, to close with the voleson, the homemade cake.

We leave Valvasone and return to Casarza della Delizia where we take the state road 13 for a short stretch before continuing on the regional road 463 up to the village of Cordovado which was the domain of the Venetian Republic since the early fifteenth century, after centuries of violence and bloody civil wars.

A story, that of Cordovado, which knew, in its history, the tragedy of drought, hunger, cold, invasions of locusts, floods, earthquakes and raids.

Today it is the peace of the Friulian countryside that dominates this jewel village of the plain, surrounded by almost completely intact walls. 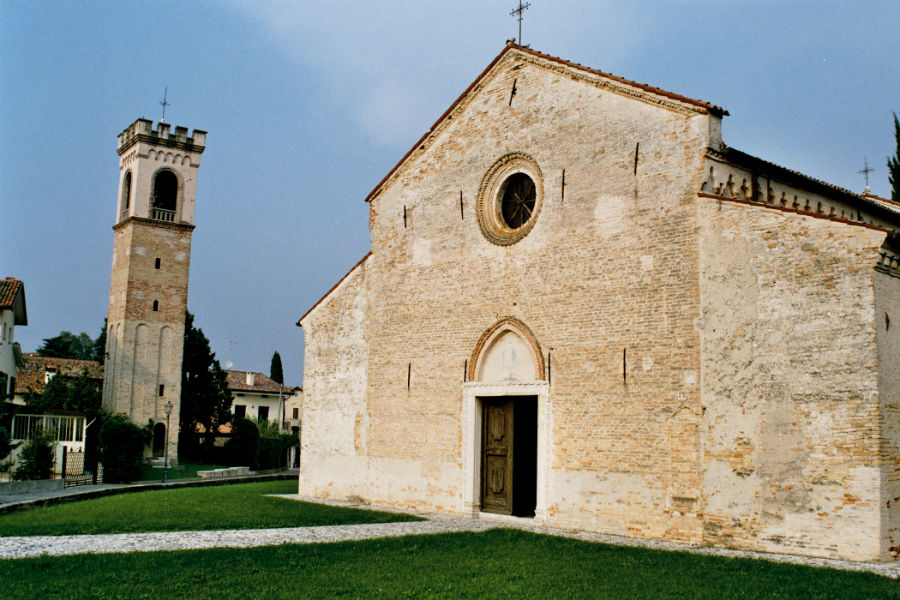 To see, among its religious treasures, the ancient Pieve di Sant’Andrea, dating back to the fifteenth century, the fourteenth-century Oratory of Santa Caterina d'Alessandria, and the seventeenth-century Sanctuary of the Madonna delle Grazie, a jewel of Venetian Baroque art, with an octagonal plan, the only one of its kind in Friuli, rich in stuccos, frescoes, bas-reliefs and statues.

Rich also the civil architectural heritage with, among others, Palazzo Freschi-Piccolomini, built on medieval vestiges and surrounded by a nineteenth-century park, the sixteenth-century Palazzo Beccaris-Nonis, Palazzo del Capitano, Palazzo Agricola, the Town Hall, ancient hospice of the nobles, the eighteenth-century Villa Segalotti, and the Cecchini buildings, which houses the Municipal Library and is home to art exhibitions and historical exhibitions, Marzin and Mainardi. 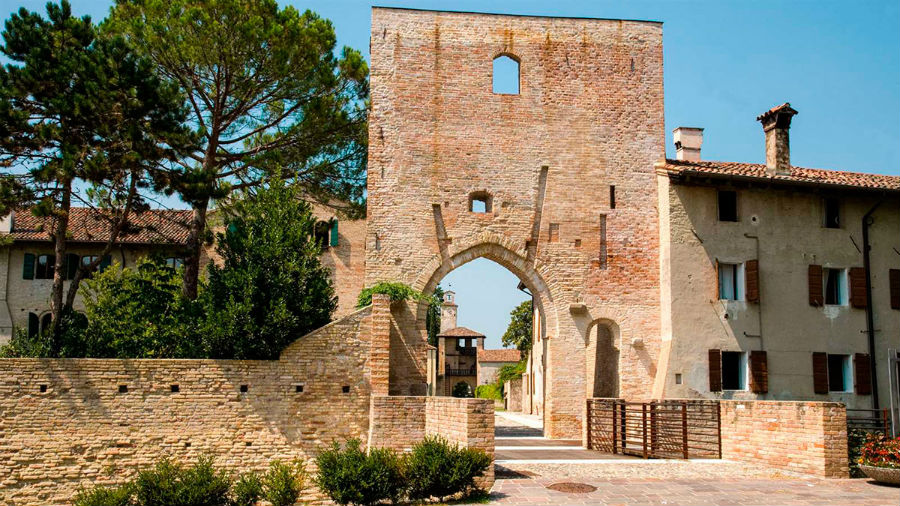 Particularly spectacular is the shielded tower to defend the village, and a visit to the theme park dedicated to the famous novelist Ippolito Nievo, which in this corner of Friuli set the initial parts of his famous "Le confessioni d'an Italian".

Also in Cordovado a gastronomic stop is a must. We indulge in a good dish of gnocchi with goose and a taste of Spaccafumo, the local artisan dessert prepared with dried figs, walnuts, raisins, hazelnuts, pine nuts, almonds, arancini and honey.

We leave the lands washed by the waters of the Tagliamento to return to Pordenone, with still in the mouth the many genuine flavors of this land on the edge of Italy and the delicious views of its villages.

Via Cesare Battisti, 4, Valvasone
B&B La contrada
The Bed & Breakfast La Contrada, in the heart of the village of Valvasone, is immersed in a frien...

Vicolo Monte Santo, 1, Valvasone
La Becjarie
Daniele and Raffaele of Becjarie of Valvasone, in Friuli, are waiting for you to make you taste t...

What to see in Valvasone

Church of the Holy Christ's Body
More...
are you an Italian villages lover?
Join our Community
and share you experiences!