Journey through the Villages of the Taranta - part one

The first part of what will be a fantastic journey to discover Puglia and the Villages of the Taranta, where you can still see these explosions of life, madness and popular culture. 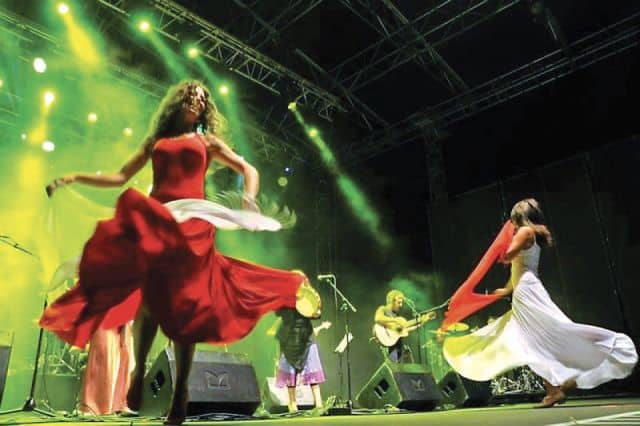 Like every year Puglia, among the many tourist-cultural attractions, is also Taranta, the night of Taranta. The rites of the pizzica and then the memory of the so-called "tarantolate", ancient and painful movements of times in which the woman had only this way, dramatic and dilaniante, to be heard, to scream its own dimension. This is an interpretation. Many anthropological studies. And so many this year the events dedicated to the Festival della Notte della Taranta (August 3-23: lanottedellataranta.it).

We, at Borghi Magazine, however, can not fail at our minimum duty. That is to say to tell you the places where all this will happen. Several countries involved before the great final event of the night of Taranta in Melpignano, inland Salento, 25. Here are the countries: from the Otranto, Nardò, Ugento and Alessano (near Leuca) to the more internal Acaya (fraction of Vernole), Torrepaduli (fraction of Ruffano), Galatina.

Let's start by telling you about the coastal towns (both Adriatic and Ionian) and then Cursi, Acaya, Torrepaduli and Galatina. Hard business because there is so much to admire. A very rich territory.

In the next, upcoming piece we will focus instead on the so-called Grecìa salentina.

Otranto is a tale of sea and history. An old town with an almost Tunisian flavor, a small town declining with charm on the sea. A cathedral that is the splendor of the Apulian Romanesque style, with the famous mosaic of the Arbor Vitae. In church also the memory of the 800 martyrs of 1480, when the village almost en masse no to the Ottomans (historical question still debated today, is clear). The martyrs are honored also on a hill, the Colle della Minerva, place of the carnage. Here the church of Santa Maria dei Martiri.

The Aragonese castle of Otranto, always at the center of literary suggestions, will welcome you as the true king of the territory. Inside, there are always interesting exhibitions. In this period a complete retrospective on the '900 Italian art (curated by Lorenzo Madaro and Luca Barsi) and an exhibition dedicated to the well-known and controversial photographer Oliviero Toscani. Otranto boasts one of the most beautiful arteries overlooking the sea in all of Salento: it is the road that leads to Santa Cesarea Terme. Here is Porto Badisco, considered for centuries the legendary landing of Aeneas, perhaps landed in the nearby (and equally beautiful) Castro, also with a castle. In Otranto also the marine area of Orte, with the famous bauxite quarry. Here the red takes possession of you. A unique color for an enviable suggestion. And what about the ruins of the abbey of San Nicola di Casole? Very interesting, dating back to the 8th century. 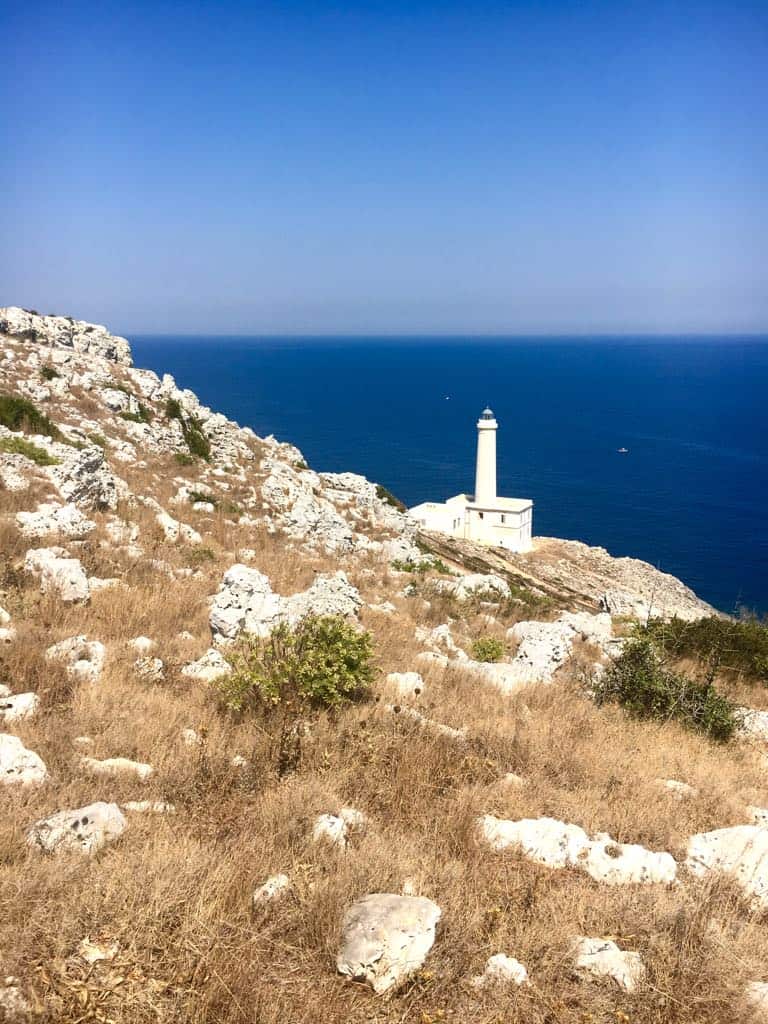 If Otranto dominates the Adriatic (by the way: here the easternmost corner of all Italy, the lighthouse of Punta Palascia, here also comes, then "die", the Ionian, which does not meet the Adriatic to Leuca, as scenographically it is believed), Nardò and Ugento are placed on the other side, in fact ionic. Nardò's marinas are so many and famous: Santa Maria al Bagno (important place also on a historical level as the site of a refugee camp for Jews during the Second World War), Santa Caterina, Sant’Isidoro, Torre dell'Inserraglio.

Also here in the historic center a beautiful, imperious castle. But also the beautiful Cathedral of the Assumption and a sunny square with the obelisk of the Immaculate in the middle. Nice night clubs, a sign of a nightlife not too invasive and chaotic. Ugento, even further down, has a truly crystalline sea, an expression of whiteness. For lovers of art and archeology, it is impossible not to mention the archaeological museum with the important testimony of Ugento's Zeus, a bronze magnogreca statue dated to 530 BC, found in 1961. Here, however, a copy, the original at the National Archaeological Museum of Taranto. 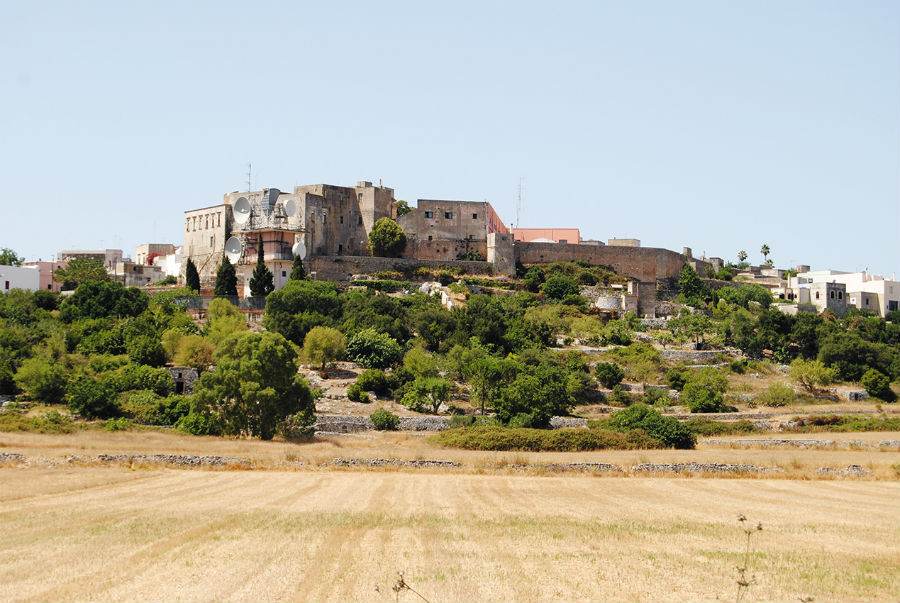 Here we are now in Alessano. We are in the internal area of the Leuca heel. But the village is very close to the sea, so much so that it is the fraction of Marina di Novaglie, really nice and with a picturesque porticciolo. The other fraction, Montesardo, also has a castle. As we can see, Salento is also an area of protection from invasions: it is proved by the constant recourse over the centuries to the look-out system of coastal towers, a phenomenon common to the rest of the South and Puglia itself. Alessano has a worthy and relevant history, an old diocese and a county head town. Today it is also known for having given birth to the charismatic figure of the bishop of Molfetta Antonio Bello, who died prematurely in 1993. Here was recently Pope Francis, precisely in memory of the undignified prelate. Spectacular the 16th century castle of Acaya.

A real renaissance profile in Salento most unthinkable. A small fraction of Vernole, 400 poor inhabitants, with an authentic jewel: enchanting castle, princely in the very small classical network of a southern center of the XVI century, arranged in a very orderly and regular orthogonal mesh. A fortified citadel that captures the visitor. The extremely fascinating work is the result of the particularly enlightened genius of Gian Giacomo dell'Acaya, Royal Military Engineer of Charles V. There is no doubt: you can not miss Acaya. Torrepaduli belongs instead to Ruffano, one of the many centers scattered throughout the great Salento peninsula: as many as 97 municipalities in Lecce.

Famous for the patronal feast of San Rocco and its only masculine pizzica called "a fencing" or "dance of swords", Torrepaduli, an old family of the Orsini del Balzo, has the sanctuary dedicated to the saint of Montpellier, from the sixteenth century with coeval frescoes. Even the mother church of the Immacolata dates back to the 16th century.

But a review of the treasures of Puglia can not neglect a casket wrong not yet popular as unquestionably deserves. We talk about the wonderful vaults and the extraordinary frescoed walls in the church of Santa Caterina d'Alessandria, just in Galatina. Once again the interior Salento surprises for its multifaceted wealth. This treasure, now unanimously recognized as "the Assisi of the South" or Puglia, is due to the aforementioned and wealthy Orsini-Del Balzo family. Galatina is therefore important for anthropology, religiosity, history, art.

Like all the countries we tried to tell you.

Hypogeum of Torre Pinta
St. Peter's Church
Pond of bauxite
More...
are you an Italian villages lover?
Join our Community
and share you experiences!

Carnival in the Villages: The best events not t...
Trentino Ski Sunrise 2023, skiing in a differen...
In Cefalu to experience the magic of Christmas
More...