Frantoi Aperti in Umbria: discovering oil in the land of Saint Francis

Evo oil is one of Umbria's gastronomic excellences and this year it will once again host the famous event from 30 October to 28 November. 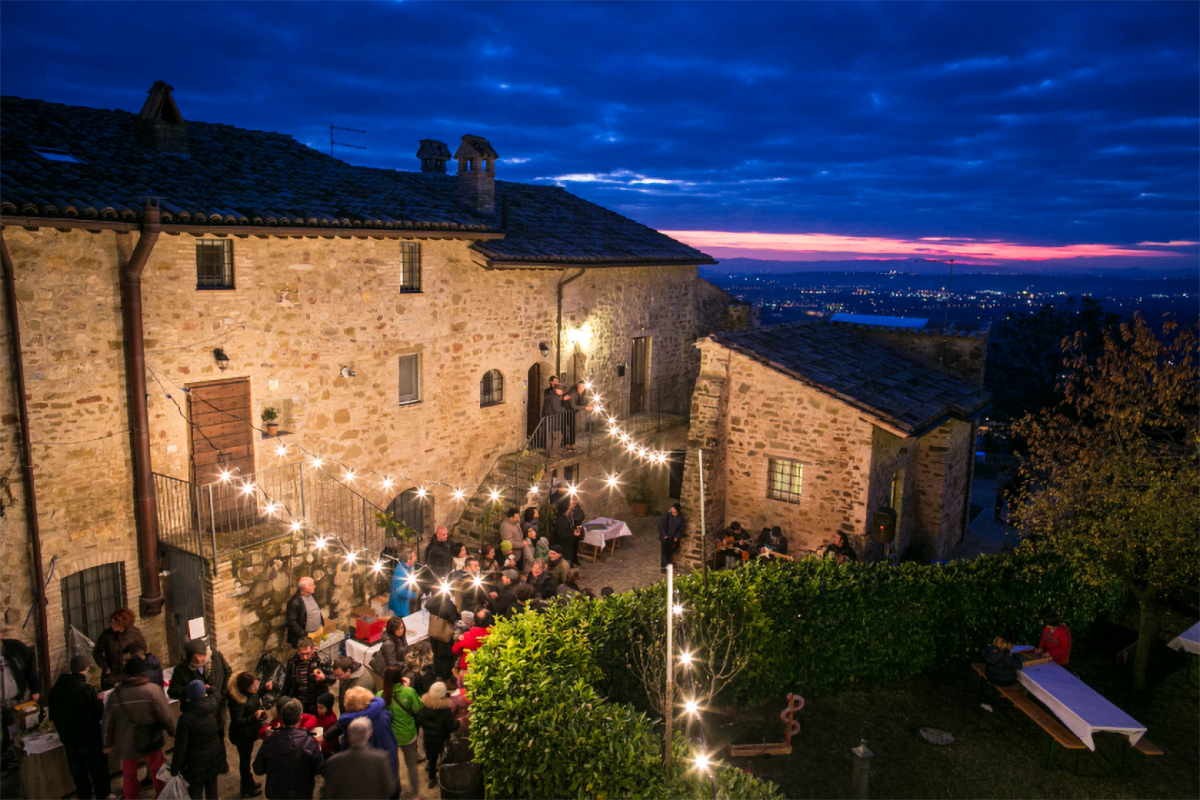 Umbria is the region that represents the green heart of Italy, thanks to its luxuriant landscapes that range from the spectacular Pian Grande of the Sibillini Mountains to the Valnerina, Lake Trasimeno and the beautiful Marmore waterfalls set in an enchanting natural area. The Umbrian territory is also characterised by the strong presence of olive groves, so much so that the evo oil is one of the gastronomic excellences of the region. It is no coincidence that for more than twenty years it has hosted the event "Frantoi Aperti in Umbria", which will take place again this year 2021 between 30 October and 28 November. The event takes place in a period notoriously dedicated to the pressing of olives and is therefore dedicated to the new evo oil, with the aim of making it known in the context of an event that also involves other sectors, so as to excite the public, including younger visitors.

The Umbria of evo olive oil on show

Travelling to Umbria during the "Frantoi Aperti in Umbria" event allows you first of all to visit the many oil mills in the area that participate in the initiative and taste their absolutely organic products. It is also possible to take part in the olive harvest and attend the evocative musical performances "Suoni degli Ulivi Secolari" (Sounds of the Ancient Olive Trees), in the vicinity of real natural matusalemms such as the Dolce Agogia olive tree in Castiglione del Lago, the Rajo olive tree in the Colli Amerini, the Macciano olive tree in Giano dell'Umbria and the Sant'Emiliano olive tree in Amelia.

In addition, this year "Olio e Fumetti-Live Drawing" will be staged in some of the olive mills: these rooms, where evo olive oil is produced, will be transformed into creative workshops where the worlds of olive growing and comics come together, thanks also to the collaboration of libraries, artistic collectives and small or large publishers.
"Frantoi Aperti in Umbria" is also an opportunity to visit the beautiful land of St. Francis, on foot or by bicycle, among residences and castles open to the public for the occasion, with an unmissable stop in the oil mills, for a snack strictly based on bread and olive oil. Particularly interesting are the itineraries that take visitors by the hand through the olive groves to discover the Rajo, Dolce Agogia, San Felice and Moraiolo olive varieties. 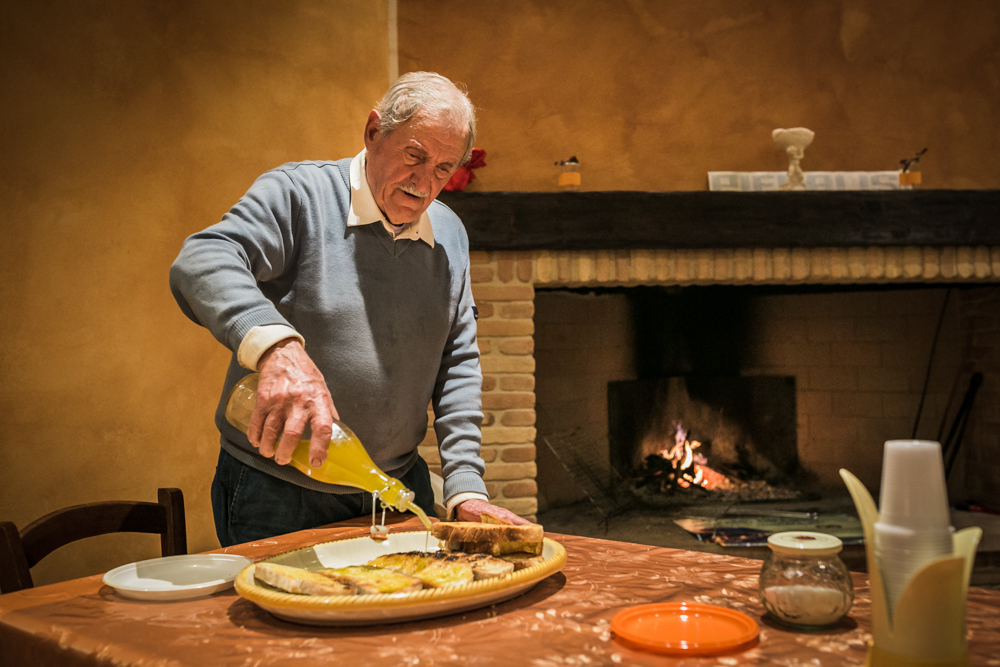 The villages taking part in this popular event welcome the public not only with tasting stands but also with small events such as the staging of stories masterfully dramatised by Maurizio Pescari. There is no shortage of musical performances and concerts in the alleyways of the participating Umbrian medieval villages, with music, dance and drum circles that always aim to involve the public.
During "Frantoi Aperti in Umbria", anyone wishing to discover Umbria's gastronomic excellence will be able to take advantage of the ad hoc menus at the ambassador restaurants, with products from the land and the lake, and evo olive oil always a major protagonist.

Among the villages taking part in the "Frantoi Aperti in Umbria" event is Trevi, the "Oil City", which in October also hosts Festivol: at the "Società Agricola Il Frantoio", as well as tasting their evo oil, you can admire the 19th century agricultural tools on permanent display.
The town, which develops in concentric circles like a snail, is home to Palazzo Lucarini Contemporary, which during "Frantoi Aperti in Umbria" hosts an event dedicated to contemporary art "Chiaveumbra-In Natura".
The historic centre is one of the most beautiful in the region, punctuated by the medieval Porte del Morto and has its heart in Piazza Mazzini, where the Civic Tower and the 13th-century Palazzo Comunale stand. Also worth a visit is the Sanctuary of the Madonna delle Lacrime, which houses the Chapel of the Magi and Perugino's Adoration of the Magi fresco. 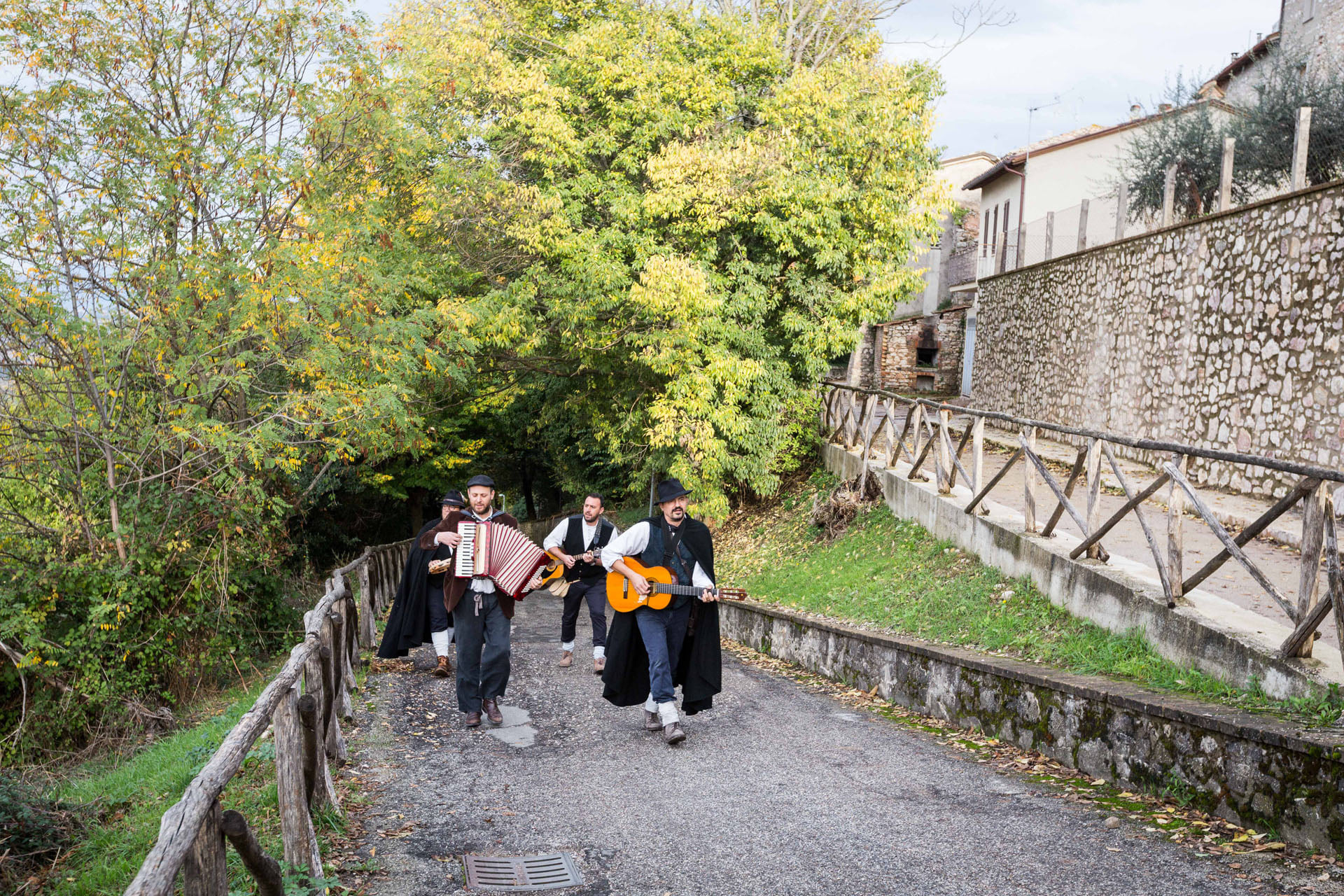 The participating villages: from Giano dell'Umbria to Todi

The event also involves the villages of Giano dell'Umbria, situated on a hill covered with vineyards and olive groves, and Magione. The symbol of the latter is the Castle of the Knights of Malta, also mentioned in Macchiavelli's "The Prince", with its four circular towers: from the Castle you can enjoy the most beautiful view of Lake Trasimeno.

During the event "Frantoi Aperti in Umbria" you have the opportunity to visit the village of Panicale in the heart of the Nestore River Valley. Wandering through the streets of the village you will come across the Palazzo del Podestà in Gothic-Lombard style and the Church of San Sebastiano, which contains an extraordinary fresco by Perugino depicting the martyrdom of St Sebastian.

In Gualdo Cattaneo, home to the Frantoio Clerici, the 15th-century Rocca (fortress) catches the eye with its curious triangular shape and three towers at each corner, connected by dark underground passages.
It is impossible not to take advantage of the "Frantoi Aperti in Umbria" event to visit Campello sul Clitunno, a stone's throw from the splendid Fonti del Clitunno (Clitunno springs): this oasis, which in the past enchanted artists and writers such as Lord Byron and Carducci, is a stone's throw from the Early Christian Temple, a UNESCO World Heritage Site. 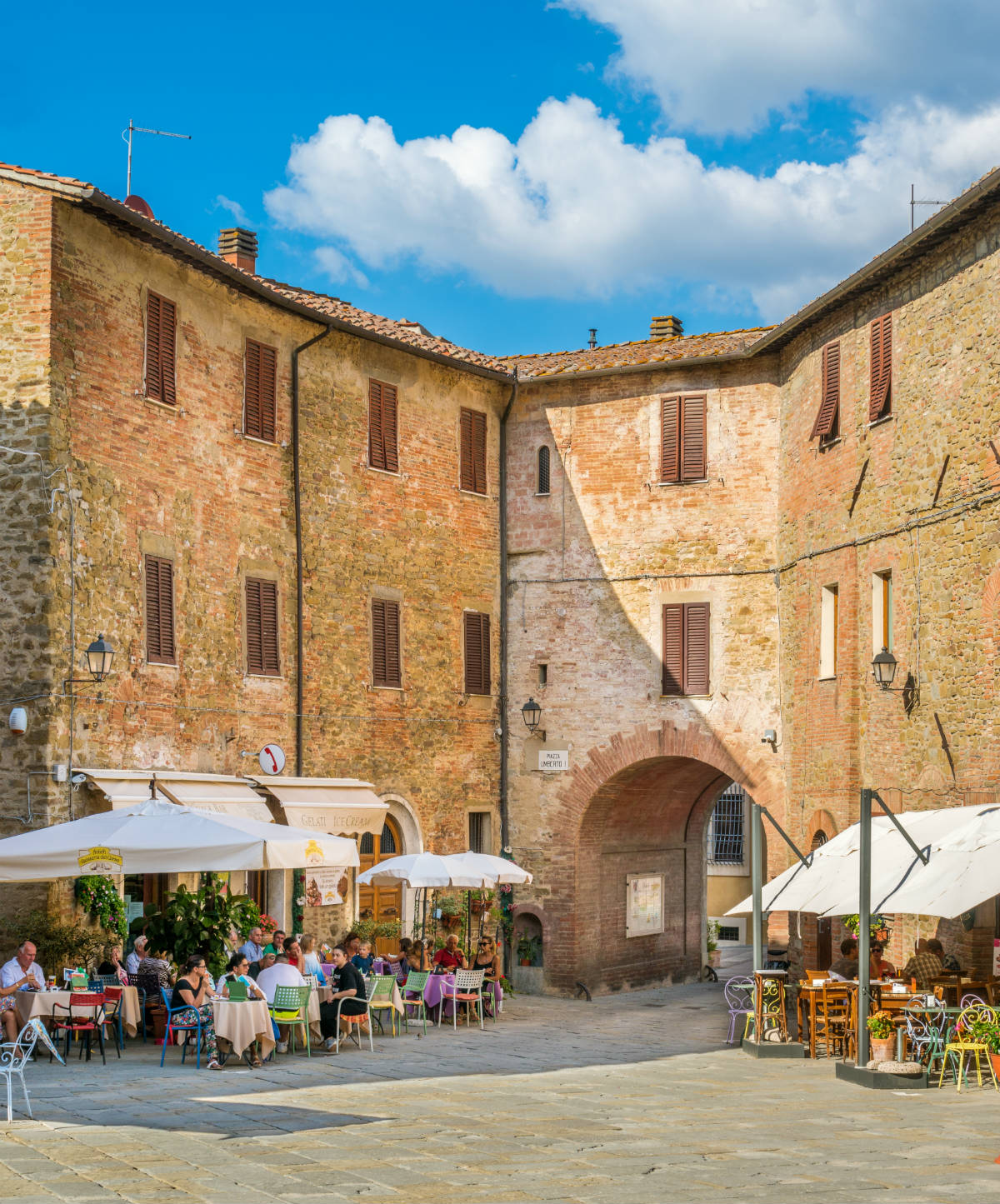 Among the villages taking part in "Frantoi Aperti in Umbria" are Castiglione del Lago overlooking Lake Trasimeno and Foligno, the town famous for its medieval Quintana joust dating back to the 15th century. Also worth a visit in Foligno are the 10th-12th century Collegiate Church of San Salvatore and the Cathedral of San Feliciano with two sculptures by Canova inside. There are many oil mills in the Foligno area, from the 'Antico Frantoio Petesse' agritourism, which also includes an inn with organic products, to the 'Il Fattore' mill near the Menotre waterfalls and the 'Frantoio dell'Eremo': the latter is literally set in the rock of the Pale Massif, at the top of which stands the Hermitage of Santa Maria Giacobbe.

Also taking part are Assisi, with its splendid Basilica frescoed by Cimabue and Giotto, and Perugia: the city of the 14th-century Cathedral of San Lorenzo and the Palazzo dei Priori houses one of the oldest oil mills among those taking part in the Umbrian event. In fact, the "Trampolini Oil Mill" dates back to the 19th century and stands just a stone's throw from the Church of Bevignate, the kingdom of the Knights Templar bordered by a garden dotted with olive trees planted between the 16th and 17th centuries by the monks of St Peter's Abbey.

Many events are also organised in Todi, the birthplace of Jacopo dei Benedetti surrounded by three city walls, in Spello where the Church of Santa Maria Maggiore is located with frescoes by Pinturicchio and finally in Città della Pieve, where Pietro Vannucci, or Perugino, was born. 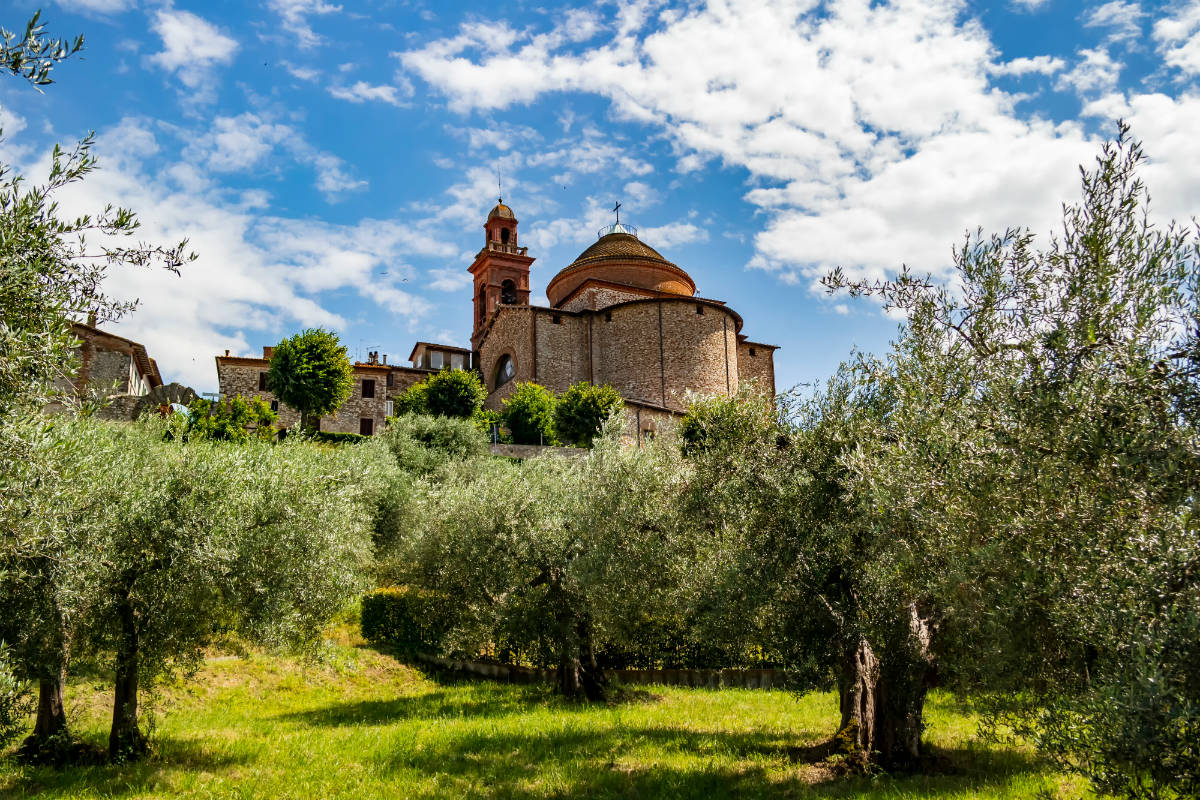 Massimo Ranieri in concert in Assisi 2022

What to see in Assisi

Basilica of St. Francis of Assisi
Basilica of Santa Chiara
More...
are you an Italian villages lover?
Join our Community
and share you experiences!