The mysteries of Lake Aiso near Bevagna (PG)

A greedy man, an abyssed farm, a child with a dark future, the revenge of the saints and strange fishes... do we need other mysteries? 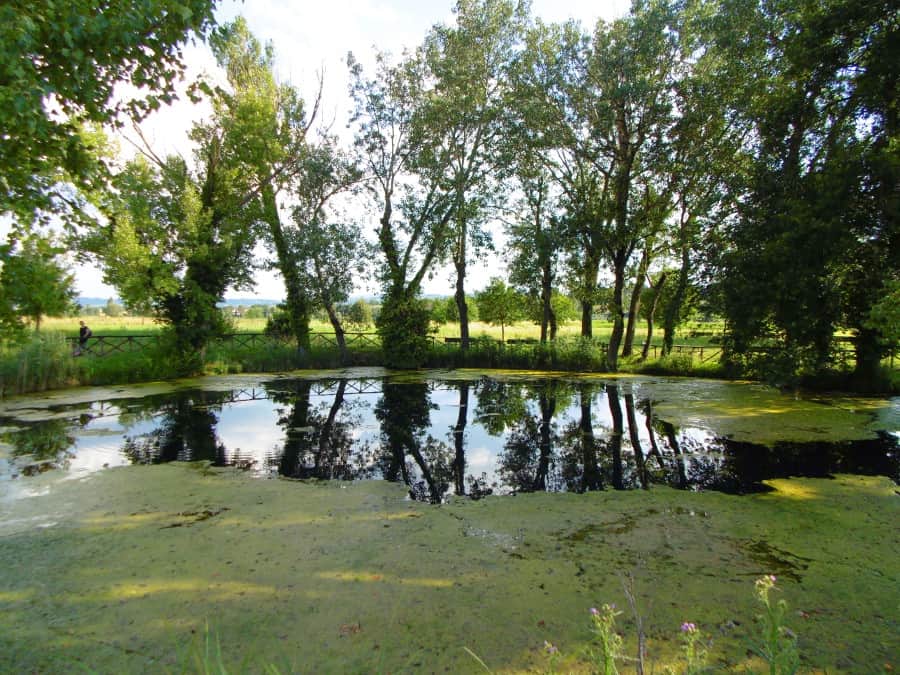 Who would have said that "the abyss" was so close to us?
But basically, what is an abyss?
A song I do not remember title or artist sang of the sweetness to sink into an abyss but here, of sweet, there's very little. I'm talking about a lake of the abyss (or hell) and more precisely of Lake Aiso a few miles from Bevagna, a village in the province of Perugia. Lake Aiso is a place of mysteries and, apparently, sometimes new and increasingly mysterious misteries comes up.
MYSTERY? ... or legend?

The history of Lake Aiso, a small lake of only 25 meters in diameter and just over 13 in depth, bring us back about 1400 years when in the 600 there was no lake but a greedy farmer by the name far from pure.
Chiarò was the name of the farmer. A "Scrooge McDuck" that preferred to tread rather than stop, even for only one day, in honor of the day devoted to Santa Anna.
The tradition of the time wanted everyone to rest in adoration of the saint on July 26 but Chiarò continued with his work.
Father of two sons, "happily" married to a strong believer, Chirò challenged the saint and this act was answered by the angels suggesting his wife to escape from the area as the abyss was about to swallow their farm.
The legend goes on saying that the Chiarò farm collapsed into the abyss and everything was filled with water to create Lake Aiso.
Chiarò's wife managed to escape the catastrophe with the 2 offspring, but a rush of water followed them and was approaching threateningly. An angel told the woman to abandon the smallest of the children on earth as he would become more cruel and greedy than the father, and she, desperately obeyed. Today, where the little one was abandoned, there is the Aisilli Lake, smaller than Lake Aiso and not far away.
Aiso and Aisilli, that still adorn the Bevagna area with the charm of the water, echo every now and then of mysteries and legends. It seems that in 2012 some shots of Elisa Duvalloni (shots donated to tuttoggi.info) have portrayed in the landscape the shape of a human face.

The legend goes on to say that in the days of Santa Anna, walking in the area, you can hear the screams of Chiarò and his child.
But that does not end here.
It seems that around the year 2012 a local student, Adalgisa Crisanti, with the help of some divers, has documented the existence of a strange little fish similar to a leaf but this is not so astonishing thinking that in the same waters a fish with a single eye was previously seen, which unfortunately today is no longer there.
This does not detract from the fact that between 2000 and 2004 in the waters of the Aiso were discovered parts of a house, now exposed in the museum of Perugia, dating back to times not too modern.
If you are visiting in the village of Bevagna I think you now know what to see but remember:
Greed is a sin, the risk is the abyss ... or maybe just to fish strange fishes ... but I think it's always worth visiting such magical places.

What to see in Bevagna

St. Micheal's Church
Church of San Silvestro
Consuls' palace
More...
are you an Italian villages lover?
Join our Community
and share you experiences!