In this article we discover together the story of Vigoleno, a beautiful Emilian village, and Saint George, its patron saint. 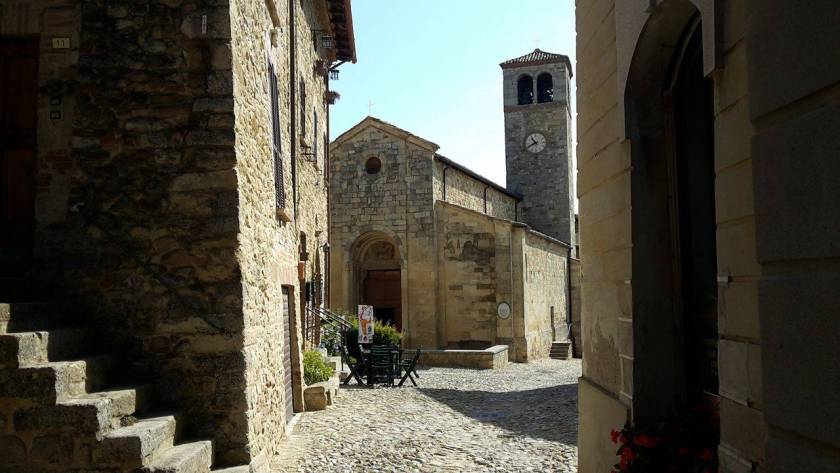 Vigoleno is a charming medieval village in the province of Piacenza. Nestled within the mighty walls, it was originally a hospitale, a place where the pilgrims of the time could stay and rest before continuing their journey, the hamlet has remained almost completely intact and still have the ancient charm of time. 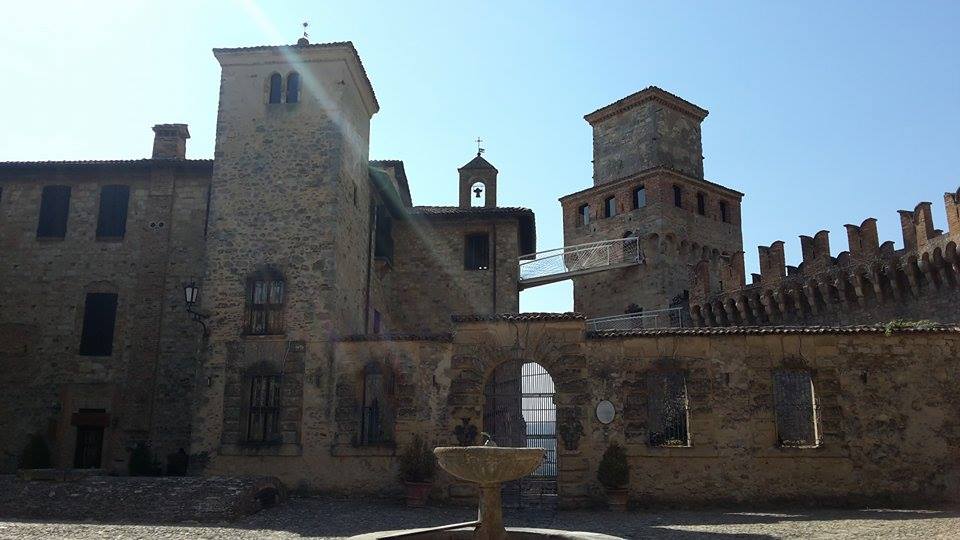 Among the buildings of the medieval complex in the square, the most famous is the Romanesque church of Saint George. Considered by the specialists as one of the best examples of Romanesque Piacenza's architectural style, it is mentioned in two parchments preserved in the parish archive, dating back to 1223 and 1284 respectively, and contains numerous symbolisms and as many mysteries.

One of these - and perhaps the most important – is concerned with the saint to whom the church is dedicated: Saint George, a brave crusade knight who was also chosen by England as his own Patron Saint.

In the upper part of the central apse there is a fresco depicting the legendary gesture for which the holy warrior is remembered, namely the act of killing a dragon to free the princess. In the painting, Saint George's crusade jacket and the sword that is about to be launched, recall the painting San Giorgio frees the princess from the dragon of Bartolomeo and Jacopino da Reggio, now hosted in Fidenza’s Cathedral. It differs from it, however, for the spear thrown on the ground, and because the heroic action is different from traditional iconography, since it takes place in an interior environment enclosed by the apse architecture, characterized by niches supported by crossbeams that give depth to the image, and is therefore a less dynamic representation than the one in Fidenza. 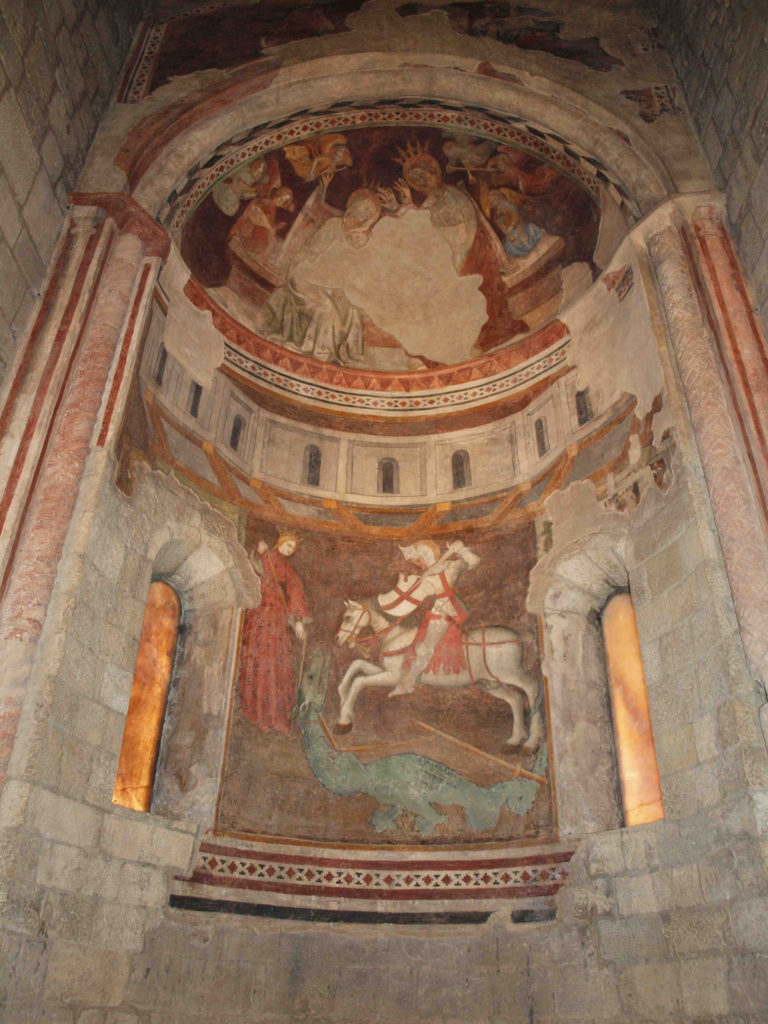 The brave knight also appears on the church's façade, sculpted in the lunette of the architrave, while killing the evil dragon beneath him, but this time he is accompanied by an angel figure placed horizontally behind him, which, it is said, remembers how the Archangel Michael - then considered more "pagan" if compared with his colleague Gabriel - has been replaced by the crusader.

But what is the point in devoting a church to San Giorgio and, above all, who wanted to build it?

Unfortunately, there is no precise information about his commission: we only know that in 1296 the church was attested as a property of the church in Castell'Arquato, and then became an autonomous church in 1346.

There are those who think that St. George's depictions represent the Visconti of Piacenza, the gentlemen who ruled the village at the beginning of the first millennium, who were so devoted to this place that part of the line joined the name of their family to the name of the place, thus becoming the Visconti of Vigoleno. According to the local testimonies, because of their profound faith, they built and restored several churches, such as the Holy Faith in the City (where they resided) in 1150 and San Nicomede in Val Stirone (of which they had the patronage). In addition, many members of the family, who lived between the 13th and the 14th centuries, were called Giorgio.

Others, on the other hand, argue - and this is the most acclaimed hypothesis - that the gestures of the holy crusader symbolize the investiture of the Scotti, a noble family from Piacenza, who owned the Vigoleno’s  castle in 1389 and became its feudatory in 1404. According to scholars, in fact, the picture would celebrate their arrival in the village and, perhaps, the start of renovations in the church, as well as the reconstruction of the whole village. In fact, the castle and the surrounding area were subjected to severe battles between the feudal families tied to the two municipalities of Parma and Piacenza - the Scotti and the Pallavicino - for almost two centuries. Not only, the area was also subject to fierce clashes between armies of the Holy See and Visconti’s troops, until Gian Galeazzo Visconti demolished the whole hamlet in the second half of the 14th century. After that, once the feud was re- taken in 1389, the Scotti asked the Duke of Milan for the permission to reconstruct it, thus giving life to the complex that we can see today. 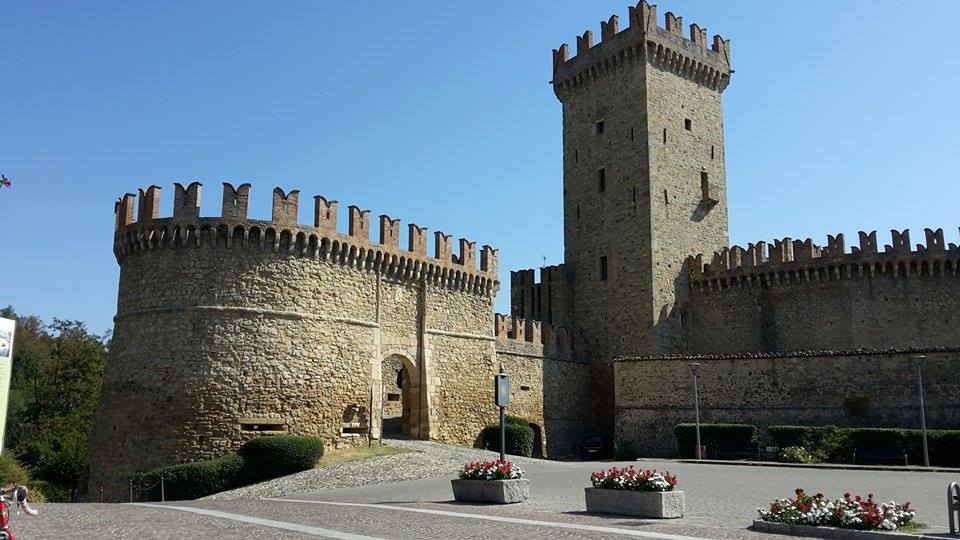 But what does the Scotti’s family has to deal with St. George?

To understand the analogy between the noble family and the holy warrior, we must first explain that in the medieval iconography, the legendary episode of St. George that kills the dragon is an allegory which symbolise the Holy Grace defeating sin, the good that triumphs over evil. So, as San Giorgio had defeated the dragon that threatened the princess and all the inhabitants of the area, William Douglas, son of Sholto Douglas and cousin of the legendary Acaio King of the Scots, came to Italy to fight Desiderio, King of the Longobards. After this glorious victory, he settled in Piacenza to rule over the whole feud. If we add that in the Vigoleno’s church there are evident traces of the passage of the Templars and that the English knights - whose oldest and most known order is the garter - chose the image of the crusader killing the dragon as their symbol, it’s easy to link the two things together.

The Templar legend - which is based on the oldest legend in the Libyan city of Selem – tells the story  of a dragon who lived in a lake and always demanded from the people of the valley a creature to eat. One day, the fate wanted the king's daughter to be sacrificed, and the poor princess was then accompanied to the lake. Suddenly San Giorgio came on horseback, and, when he saw the girl, he told her that he would have saved her. The dragon arrived and the brave warrior felt lost for a moment, an angel came from the sky and encouraged him. So, the holy knight on the horse's back launched his sward against the dragon and made it fall; then ordered the princess to close its mouth with his belt, and together they led him to the village, docile as a lamb. They were greeted with honour and joy and the king wanted to reward the knight. He offered castles, gold and silver, but Saint George asked them to believe in God and to become good Christians. Thousands of people were then baptized and from that day the dragon did not bother anymore.

Just like in England at Vigoleno St. George is celebrated on April 23rd : after the Mass celebrated in the homonymous church, the procession through which the statue of the patron saint is carried to the square outside the Fortified walls takes place. The ceremony is accompanied by costume parties and performances of skilled flag wavers.

Literature in places of history

What to see in Vigoleno

Museum of the Donjon
The Oratory of the Madonna delle Grazie
The Romanesque Pieve di San Giorgio
More...
are you an Italian villages lover?
Join our Community
and share you experiences!