The Sibillini Mountains, an enchanted place in the Marche among magical caves, fairies and unicorns

In this article we will discover together the famous Umbrian-marchigian mountains and will go through all the stories and legends of the place, from the Sibilla Grotto to the recent news of the Unicorn of the Sibillini Mountains

Once upon a time, there was an enchanted cave, the house of a witch who, with its enchanting powers, was able to attract the most fearless knights and imprison them in his abode for a long time, forcing them to the damnation of the soul and the sin.
She lived surrounded by her ancestors, fair-minded creatures who regularly went down to the valley in the night to dance with the local youth ...

No, it's not a fairy tale (... or at least not just this), but one of the legends that originates between the Sibillini Mountains, the mountainous complex located along the Umbrian-Marchigian Appenine, and in particular in the Grotto of the Sibilla, also called Grotta Of Fairies, near the summit of Mount Sibilla. 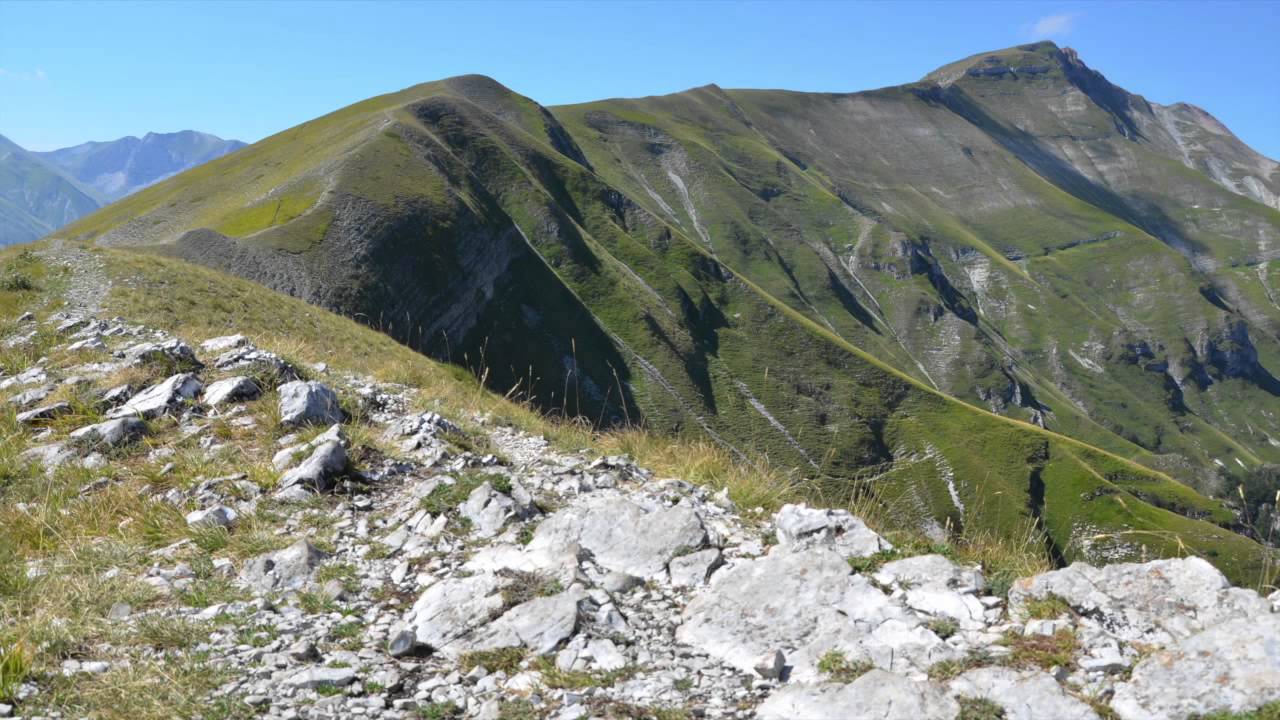 The name of this mountainous relief derives from the legend of the Appennine Sibyl, according to which the hidden cave in the mountains of the Umbrian-Marchine appennine was nothing else than the point of access to the underworld of Queen Sibilla, an old priestess able To predict the future.

This figure originates in the primitive cults of the ancient Italian populations that settled in the Umbrian-Piceno territory; and his oracles were pronounced in impoverished places such as the mountains, caves and cavities of Mother Earth. According to the original version of the legend, the Appennine Sibyl was a good fairy, seer, and enchanting, possessing knowledge, aesthetic of astronomy and medicine, who gave prophetic responsibilities with a language not always easy to interpret.

Inside the cave, the clever priestess Sibilla was surrounded by her maids, also called the Sibilla's fairies, young handsome women dressed in caste skirts with goat's paws, whose footsteps recalled the noise of animal hooves Rocky mountains.It is said that these fascinating creatures moved between Lake Pilato, where they went for the foot bath, and the countries of Foce, Montemonaco, Montegallo, between Pian Grande, Pian Piccolo and Pian Perduto of Castelluccio di Norcia and Pretare, Where today a representation called "The Descent of Fairies" preserve and recall the memory of the presence of these creatures.

They came out mainly at night, because in order to be able to belong to the enchanted kingdom of the Sibyl, they had to go back to the mountains before the lights of the dawn emerged. The sibillian fairies loved to dance on nights, and they were used to secretly capture the horses of the residents to reach the squares of the countries near their cave to dance with the young shepherds. In fact, these creatures are attributed to the origin of the dance typical of the area: the "saltarello".

The rapture of the equines was discovered by a farmer who, after noticing in the morning the sweaty and fatigued beasts, despite the cool temperature of the shelter, he tried to figure out what was happening during his absence and found that they were fairly good at serving Of its animals.

According to the legend, after remaining for too late during one of those festivals, the maids escaped so fastw, that they create what is now called the Strada delle Fate, a fault at 2000 meters above Mount Vettore.

From the contact between the fairies and the shepherds, it originated the myth of the love that binds them to men, according to which the latter, when they came into contact with them, would be taken from their world, leaving the fate of simple mortals, and invested in a sort of virtual immortality that would leave them alive until the end of the world, as it did with fairies, but forced to live in the subterranean realm of Sibilla himself.

The shepherds, however, were not the only ones to enjoy the company of the Sibyl's fairies, since they sometimes went downhill to teach young people the spinning wool weave.

Finally, another legend, though less accredited, is the one that sees Queen Sibilla and her fairies as beautiful women, but who turn each weekend into snakes, which in Celtic tradition is a symbol of fertility, because of the healing for the skin mood phenomenon of these animals.

All this has nothing to do with the description of the Sybil made in subsequent ages, where the priestess was painted as a pernicious and demonic being. Also due to the advent of Christianity over the centuries, especially in the Middle Ages and early Renaissance, many writers, poets and literates have completely transfigured their benevolent personality to turn it into a devilish, lascivious, enchanting woman of men.

An example is the chivalric novel by Andrea da Barberino entitled Il Guerrin Meschino. In this story, set in the year 824, a knight goes to the Sybil's Grotto, on the Sibillini Mountains, to know the identity of his parents, but the Sybil keeps him trying to sin and deny God. This infernal interpretation is progressively worsen in the later versions of the novel, especially in the time of the Inquisition (like that of 1785 published in Venice), in which the figure of the Sibyl is even replaced by the one of Maga Alcina.

Numerous philologists believe that the legend of the Appennine Sybil has inspired the German legend of Tannhäuser, which has spread to Germany since the end of the 14th century, which in fact presents countless analogies to the story of Guerrin Meschino. It tells that the valiant Knight Tannhäuser goes to Mount Sibilla, called Venusberg (Venus Mountain), and after being for a year in the arms of Frau Venus (the goddess Venus, from which the name Frau Venusberg to the cave ), He goes to Pope Urban IV to be absolved from his sins. He will not get it and he will return into the arms of his beloved Venus. The finale in the German re-elaboration of legend flies with that of Guerrino and the Pope will be condemned for eternity. The triumphant eros in the finale of this German variant of the legend of the Appennine Sibilla inspired Wagner for his Tannhäuser.

These and other tales made the Sibyless very famous and the Agnese of Burgundy sent Antoine de La Sale to visit his cave on May 18, 1420. From this visit was born the Queen of Sibilla's Paradise, the travel diary in which he provided detailed drawings and Descriptions of the cave. 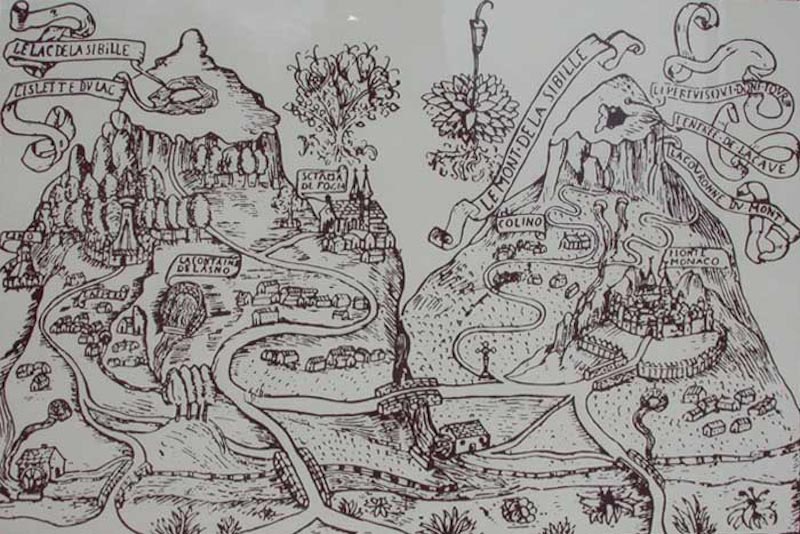 The most recent description, though not very different from that of La Sale, is that of the Lippi-Boncambi dating back to the mid-20th century. The scholar was one of the last visitors to the cave before the entrance collapsed definitively following a fierce use of explosives that, instead of contributing to opening it further, caused the closure perhaps definitive.

Always according to the local tradition, it was the Sybil that caused an intense telluric event in the village of Colfiorito, the ancient name of Pretare, which destroyed the site by reducing it to a bunch of stones, because the fairies remained dancing in the village beyond the time allowed for returning to the cave.

Some say that after being demonized for centuries by the sermons and saints of the friars and forced to take refuge in the bowels of the mountain, sibilline fairies have disappeared due to a sort of "excommunication" imposed on them by Alcina who wanted to punish them for having unkindly showed their goat's parts. Others, on the other hand, claim that the fairies are still on the Sibillini Mountains and manifest their presence through weird appearances, such as the "little braids" that forms on the animal maneuvers as they run freely pasture on the mountains, or the occasional lights after the sunset at Colle di Montegallo, in the area of ​​Santa Maria in Pantano.

It is not known whether the Sibillini Mountains are still inhabited by Sibilla's sages, but what is certain is that this place has kept its enchanted atmosphere, let's just say it, with its somewhat fantasy charm and still talking about itself "magic appearances" that take place on the site.

Recently, in fact, among the fairy woods of the Sibillini Mountains, not far from the cave, a creature with a single horn was spotted. Ignore the image of the white horse with magical powers, because what was seen on the meadows of the Fiastrone valley, in the Marches, an area that unfortunately has been devastated by the earthquake last year, is a young roe deer. Captured  by a videotape, a hidden camera in the vegetation, is a rare specimen and it could be that the "palco", the scientific name for the roe deer with a single "horn", inspired in the past the myth of ' unicorn. 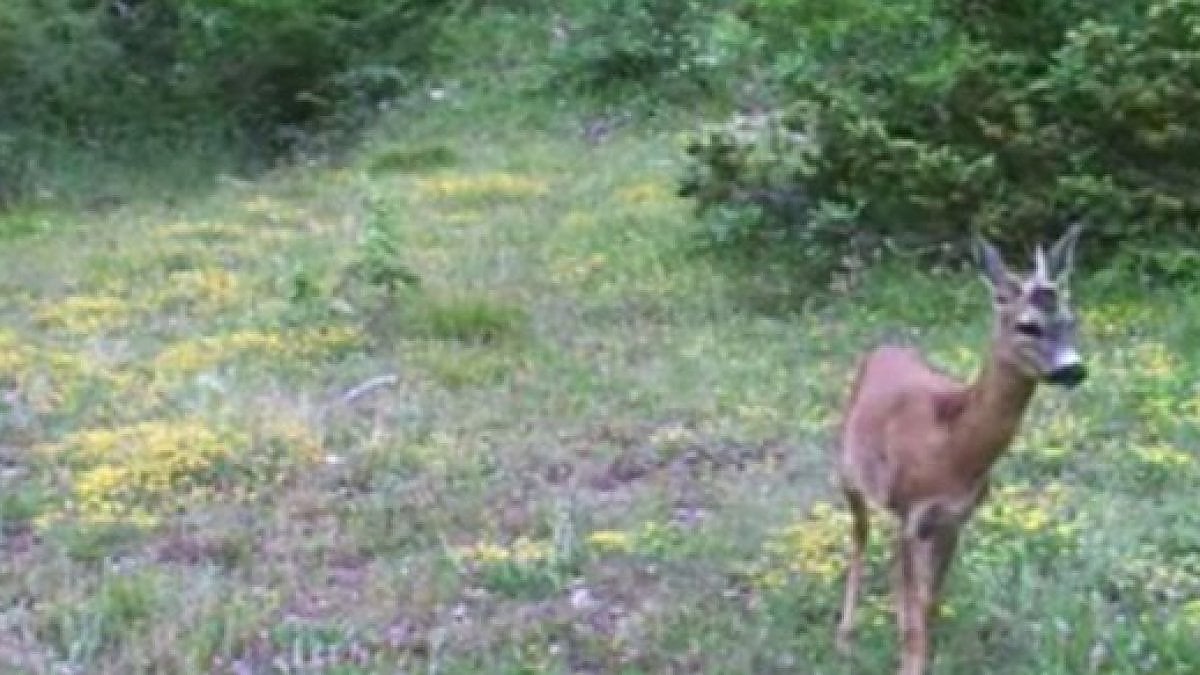 As the ethologist Enrico Alleva explains, the single horn may be due to malformation, a genetic error. But it does not seem to disadvantage the little roe deer and, indeed, has aroused the amazement of the same author of the video, Giuseppe Chiavari, who said, "For so many years that I phototrapping I had never seen such a specimen. With his other fellow in joyful clashes and was in no hurry for his disability. "

But why the unicorns, or rather, the stories related to them fascinate us so much?

Perhaps because in the medieval tradition, the horn of this mythological animal was attributed the ability to neutralize poisons. Symbol of purity and chastity was also represented on emblems and coats of arms. But it was already widespread in the depictions of ancient civilizations, like the Sumerians. It is still present in literature and cinema today: in Harry Potter and the Philosopher's Stone, for example, the blood of a unicorn has the power to make it immortal.

Visit the village
are you an Italian villages lover?
Join our Community and share you experiences!

The legend of Bora’s love
The legend of Aloisa, the ghost of lovers in th...
Carloforte: a village to see live, not only on TV
More...