Italian villages in movies, when cinema is set inside the villages – Episode 1

Italian villages are natural sceneries for arthouse masterpieces. From north to south, here are some location used for famous movies or by great directors, from Borghetto to Sabbioneta, from Savoca to Tremosine and even more. 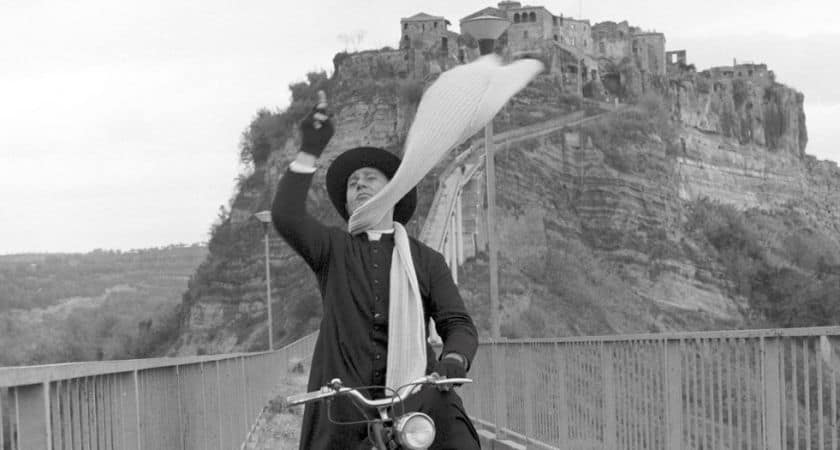 Italian villages are natural sceneries for arthouse masterpieces. From north to south, here are some location used for famous movies or by great directors, from Borghetto (Luchino Visconti) to Sabbioneta (Bernardo Bertoulucci), from Savoca (Francis F. Coppola) to Tremosine for a James Bond episode. 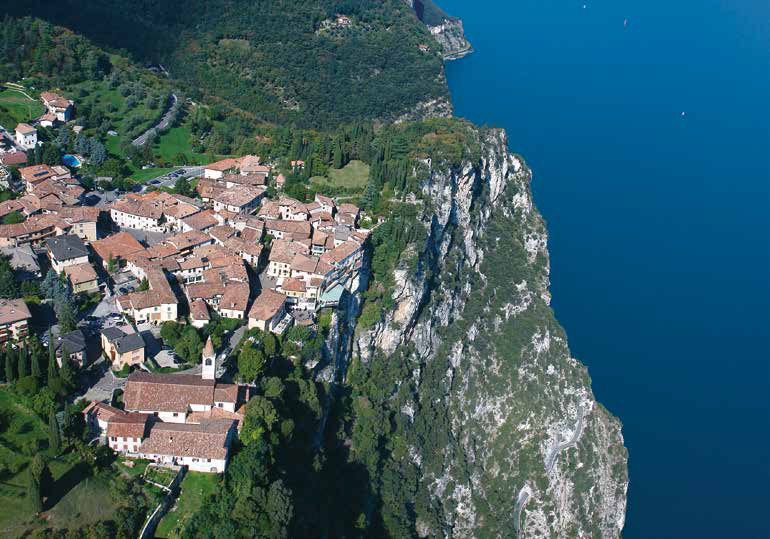 The mad chase with which Quantum of Solace by Marc Forster (2008) begins, an episode of the 007 agent’s saga, was filmed in Tremosine, on Lake Garda. James Bond’s challenge let us discover, even for a few minutes, one of the most incredible road of Italy, where you must drive with the greatest care and not with the daredevilry of the secret agent. Who watches the houses of Pieve di Tremosine from the lake, which are aligned on the upland edge at almost 400 mt higher than the lake water, is wondering how a road could possibly go up there. For centuries a steep path united the port to the capital and for centuries men transported on their shoulders wood, coal, oil and grain. When they arrived down, they had to sail the lake toward Desenzano and Bardolino, once relying on boats and barges, then with bigger boats. Only in 1913 a road connecting with the port was built. It is a road nestled in the bowels of the mountain, along the gorge carved by a stream that the rock wraps up as a serpent’s coils. 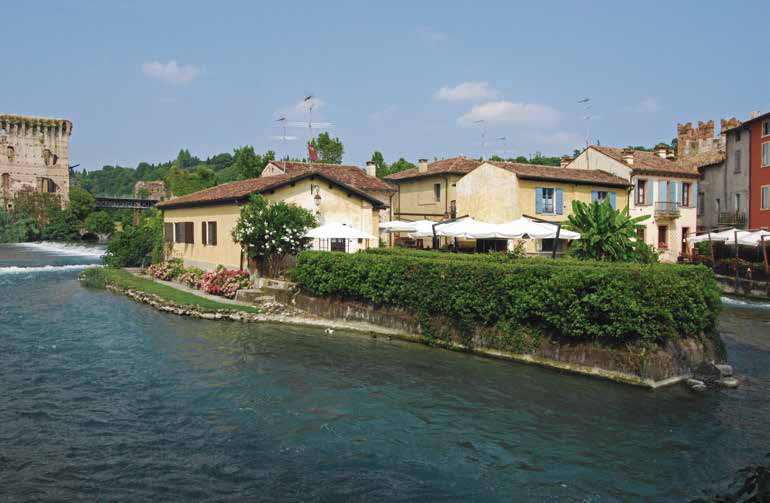 The history of Borghetto, a village in the municipality of Valeggio sul Mincio (Verona), is the one of an important crossing point and a border area between Lombardy and Veneto contended by opposing armies. This ford of river Mincio was the most convenient and safe in the south of Lake Garda and the river has represented for centuries a natural barrier between the lands of Mantua and those of Verona, in a border area targeted by lords and armies that were really interested in this area: the Gonzaga, Scaligeri, Visconti, Venice, Austria and France. These places have also been shaped by the Napoleonic battles and, especially, the memories of Risorgimento, immortalized by Luchino Visconti who filmed some scenes for his movie Senso in 1954 on the wooden bridge which crosses the river Mincio. Borghetto is a very romantic place, especially in the evening, and it looks like a postcard from the nineteenth century, with its Risorgimento relics like the artillery ball still trapped in the facade of the Antica Locanda Mincio. As it is said, under the foundations of the inn there should be the ancient Templar thaberna: evidence that even the warrior monks loved loafing. 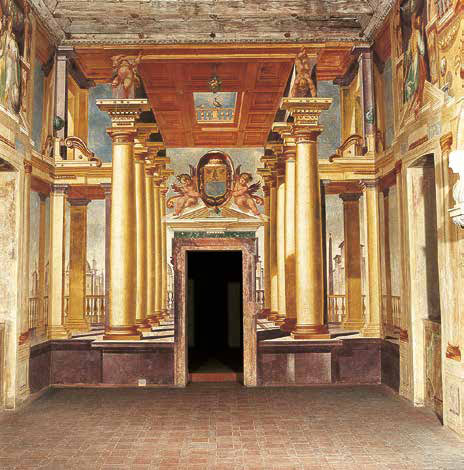 obtained in 2008 the recognition of World Heritage Site together with Mantua. In 1970 The Spider's Stratagem was released in theatres, the movie directed by Bernardo Bertolucci, who will have gained international fame with his next movie Last Last tango in Paris (1972). Loosely based on the double story of Jorge Luis Borges, the subject develops an existential and political event set in Sabbioneta that in the movie takes the imaginary name of Tara. Some shots were also carried out in the nearby Pomponesco and in the plain of Parma near the river Po. Piazza Ducale, Galleria degli Antichi, via dell’Accademia with Palazzo Forti and via dei Serviti with the Chiesa dell’Incoronata are corners of Sabbioneta which are present in the movie, that were able to restore the faded beauty of the town. The deserted streets make the human presence disturbing in this "ideal city", which rose from scratch in the second half of the XVI century in obedience with duke Vespasiano Gonzaga’s will. 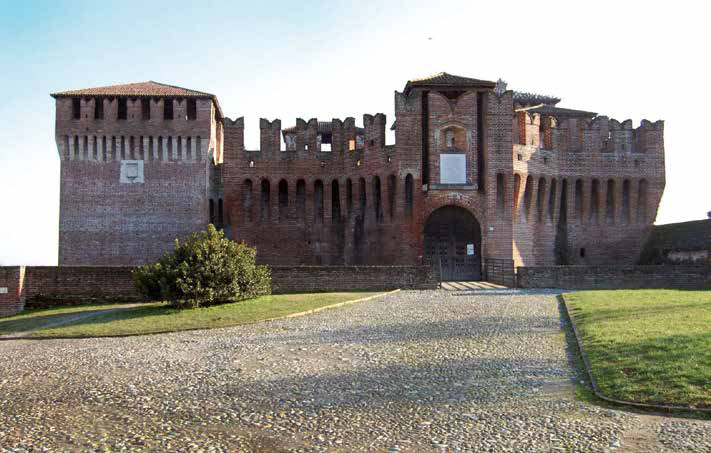 Photograph by Vittorio Storaro, perfect costumes for a medieval setting, actors like Rutger Hauer and Michelle Pfeiffer: Ladyhawke by Richard Donner of 1985 is a fantasy masterpiece. The strength of the movie resides also in the beauty of the places where it was filmed, all in Italy, in particular the mountains of Gran Sasso in Abruzzo with the fascinating castle of Rocca Calascio, so real it seems fake, and the Rocca Sforzesca Soncino, Lombard hamlet in the province of Cremona. The fortress was built in just one year in1473 and together with the circle of walls which was made twenty years before, it makes Soncino one of the most interesting fortified cities of Italy. The fortified structure stands high on the plane of the countryside and develops for two kilometres. The current state of preservation allows you to observe the constructive technique, with the organised weaving of the bricks and the regular series of towers and bastions with its three doors, called "a Sera", "a Mattina" and "di Sotto". 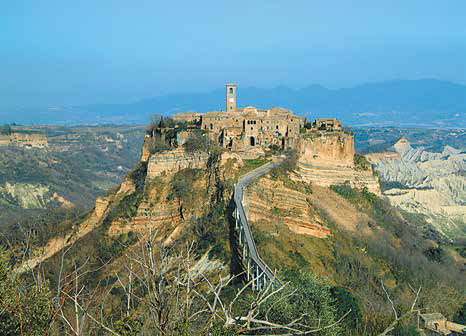 Civita di Bagnoregio, in the province of Viterbo, was recently nominated by the Lazio region for World Heritage Site, with an initiative that Unesco defines as "solid", that is with a good chance of winning. The hamlet is in danger because it could collapse entirely, although in recent times some VIP  purchased a home here. Personalities like the former president of the Republic Giorgio Napolitano, director Bernardo Bertolucci, the archaeologist Andrea Carandini, artists such as Bruno Bozzetto, Michelangelo Pistoletto, Jannis Kounellis, Ennio Morricone, Nobel prize winner Dario Fo and the writer Andrea Camilleri appealed to save it. In Bagnoregio were filmed the scenes from La strada by Federico Fellini (1954) and in Civita from The Two Colonels by Steno with the great Totò (1962). It was also set here the episode of Alberto Sordi in the movie Let’s Have a Riot by Luigi Zampa (1970), where the great Roman actor played the role of a priest from the countryside. 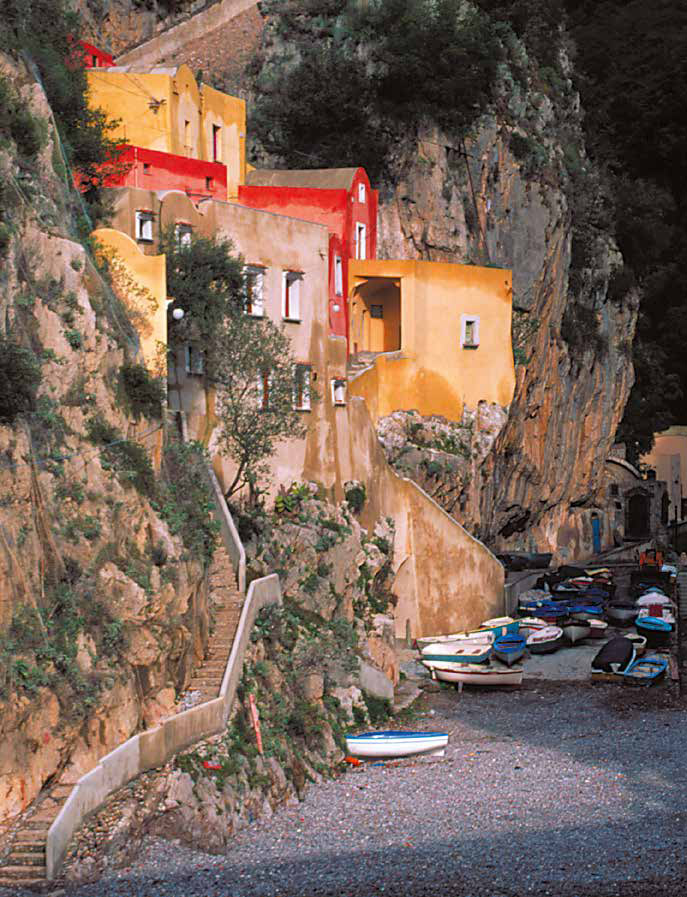 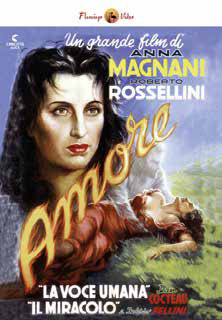 Furore, village of the Amalfi coast that takes its name from the fury of the sea waters within the fjord, was the scene of the second episode, entitled The Miracle, from the movie L'Amore by Roberto Rossellini (1948) with Anna Magnani. The turbulent story of Rossellini and Magnani, who met and fell in love on the set of Rome, Open City, experienced the first moment of crisis when, during the making of Amore, the Swedish actress Ingrid Bergman came into the director’s life. The episode The Miracle, added later to the movie because it was too short (the first episode is The Human Voice), was adapted by Federico Fellini, who invented for Magnani the history of a poor mad woman that gets pregnant by a vagabond shepherd mistaken for San Giuseppe. The Miracle was filmed on location, in Maiori and in the fjord of Furore. What remains in the eyes, for the lovers of cinema, is the image of Magnani who, from the fjord, goes up towards the houses and the church of Furore, where she will give birth, along the ridge cliff, accompanied only by a goat. 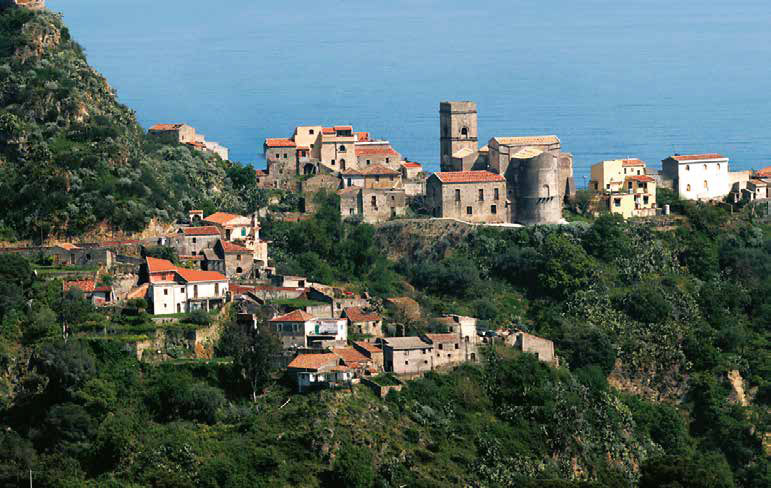 They called it the city of the Godfather: it is here, in fact, that Francis Ford Coppola in 1972 set some scenes of his great fresco about an Italian-American Mafia family. A film which leaves us glued to the screen and that, once you’ve seen it, leaves us glued also to Savoca, village in the province of Messina that is the essence of Sicily. Any way you look at it, the horizon offers always new scenarios: from the blue of the Ionian Sea to the rugged Calabrian coast, from the green Peloritani mountains to the majestic Etna, from the cisterns dug into the rock to the houses separated by cliffs where the caper bush and broom roots. Always different panoramas that give credit to the popular saying according to which Savoca has seven faces. It is evident that the ancient stones, cloisters, plants, the wind, the changing landscape, even the silence and the embalmed deads in the catacombs, have a voice: they tell fascinating stories that emerge from a dusty past.

Via Cavalieri Vittorio Veneto, 14, località Pieve, Tremosine sul Garda
GeoResort
The GeoResort, unique in its kind, is situated in the locality of Sompriezzo, 1.5 km from the vil...

Via Cruseta, 1, località Sompriezzo, Tremosine sul Garda
B&B Val di Brasa
Located in Alto Garda Bresciano Park, our B&B is located at the beginning of the Val di Brasa, in...

Via Jacopo Foroni, 18, Borghetto sul Mincio
Farm Zanetti Roberto
The farm is set in a beautiful natural setting on the "terraces" overlooking Lake Garda. The two...

What to see in Civita di Bagnoregio

Geological and Landslides Museum
More...
are you an Italian villages lover?
Join our Community
and share you experiences!