The legendary Squinter of Apulia, founder of the village of Alberobello

Character feared for some of his terrible acts, responsible for the creation of the trulli and their magical village 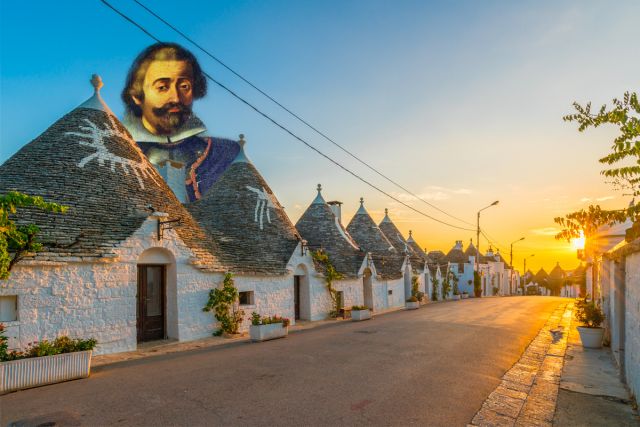 Count Giangirolamo II Acquaviva d’Aragona was really a particular character. Count of Conversano from 1626, feared by his subjects for his reputation as an evil and vengeful man, he was also a practicing clergyman devoted to the holy brothers Martiri and Medici Cosma and Damiano, he was an excellent patron and was responsible for improving the conditions of life of its peasants. A very particular man who, even if he was a firm supporter of the Spanish crown (which dominated at the time) did not lose an opportunity to circumvent it with a stratagem, founding one of the most picturesque Italian villages and the houses that symbolize this.

The "Squinter of Apulia", so called because it seems he had a squinting eye, was a man to whom various unhappily "legendary" behaviors are due. Like practicing the Ius primae noctis, or the right of a feudal lord to spend the first wedding night with the bride of one of his subjects. What if the unfortunate was not condescending? Simple! The count had her thrown into a well located in a room of the castle of Conversano. It seems that the inhabitants of Conversano are all nicknamed "sons of the count".

Squinter yes, but he took advantage of it a little. The count is also legendary for another strange behavior. It seems he enjoyed training in the use of his arquebus, firing from the main tower of the castle, targeting the jugs that the commoners carried to fill them with water in a well in the middle of an open space near the church of Santa Caterina. When "by mistake" the count hit women instead of jugs, his defenders declared that he was wrong because of his one-eyed sight. In fact, he had such an infallible aim that today the clearing is called "red soil".

But it is not the only place in Conversano to take a nefarious name due to some idea of ​​the count. This episode began when, in 1647, the king of Naples ordered him to put down the revolt in Nardò and Lecce. The one-eyed man wasted no time and with 4000 soldiers invaded the countryside, winning the battle and then having the leaders of the revolt tried and arrested but, while he was at it, he took the opportunity to eliminate some personal adversaries. Thus it was that, in an alley on the outskirts of Conversano, 24 of those responsible for the revolt were publicly hanged and then skinned. Their skins were used to line 24 chairs for the great hall of the castle. Today that same alley is called "Way of the forks" and it seems that the 24 chairs could be admired until the early twentieth century in the hunting lodge of Marchione (one of the count's houses).

But let's come to Alberobello. The count's father already sent about forty peasant families to an area where there was a forest full of oaks to reclaim it and make it arable. In 1635 the one-eyed built an inn with a refectory, tavern and oratory in the center and began urbanization by building an agglomeration of small houses using only dry limestone and karst stone, that is, without using any type of mortar. Here is the birth of the Trulli. The expedient of building dry stone walls helped the count not to pay taxes to the Spanish viceroy of the Kingdom of Naples, going against a law that established that an urban center could not be erected without the king's permission and due payment. So he decided to build those houses without mortar so that he could destroy them if the Kingdom of Naples had made checks in the area, and then had them rebuilt with the same stones. Although the agglomeration was not destroyed by the rulers, the count was arrested for his impudence in 1643.

Alberobello remained a fief of the Conversano family until Saturday 27 May 1797, when King Ferdinand IV of Bourbon accepted a request from a committee-delegation of the small village and issued a decree sanctioning that it was free from feudal servitude, becoming a royal and independent city. This day is celebrated every year in Alberobello, in July, with a historical re-enactment called the Expulsion of the Count of Conversano.

Thinking back to Squinter of Apulia... Who could think that an act of building abuse could, over the centuries, constitute one of the most evocative Italian urban landscapes?

What to see in Alberobello

Church of Sant’Antonio
Trullo Sovrano
More...
are you an Italian villages lover?
Join our Community
and share you experiences!