The mysteries of the village of Palmanova 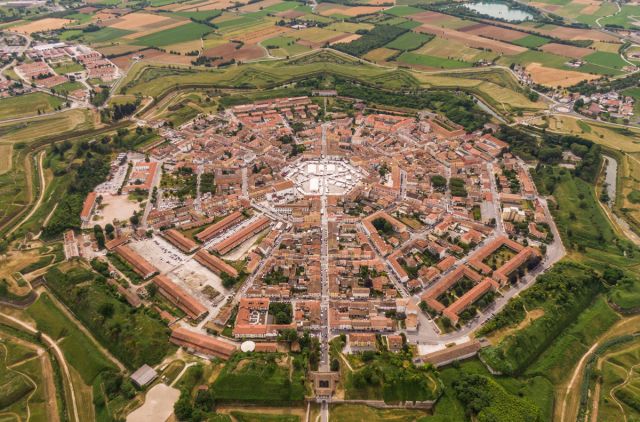 Wanted by the Republic of Venice at the end of 1500 for military purposes only, Palmanova today shows itself as a real star launched a few decades ago in the world of tourism. The geometric perfection, almost unsettling, of the Palmanova plant has always fascinated and during its history it has evoked various suggestions. Let's start with a legend.

At the time of the decision on where to build an ideal fortress to counter Turkish incursions, it is said of a team of administrators of the Serenissima sent to the Friuli plain in search of the right place. During a day of heavy rain, the team found shelter in a small chapel shrouded in utter desolation. In the silence of that damp shelter, a strong gust of wind blew a cobweb from the ceiling, which landed perfectly flat on the floor in front of the researchers. It was that perfect shape that inspired the group on the shape of the fortress they were to build. 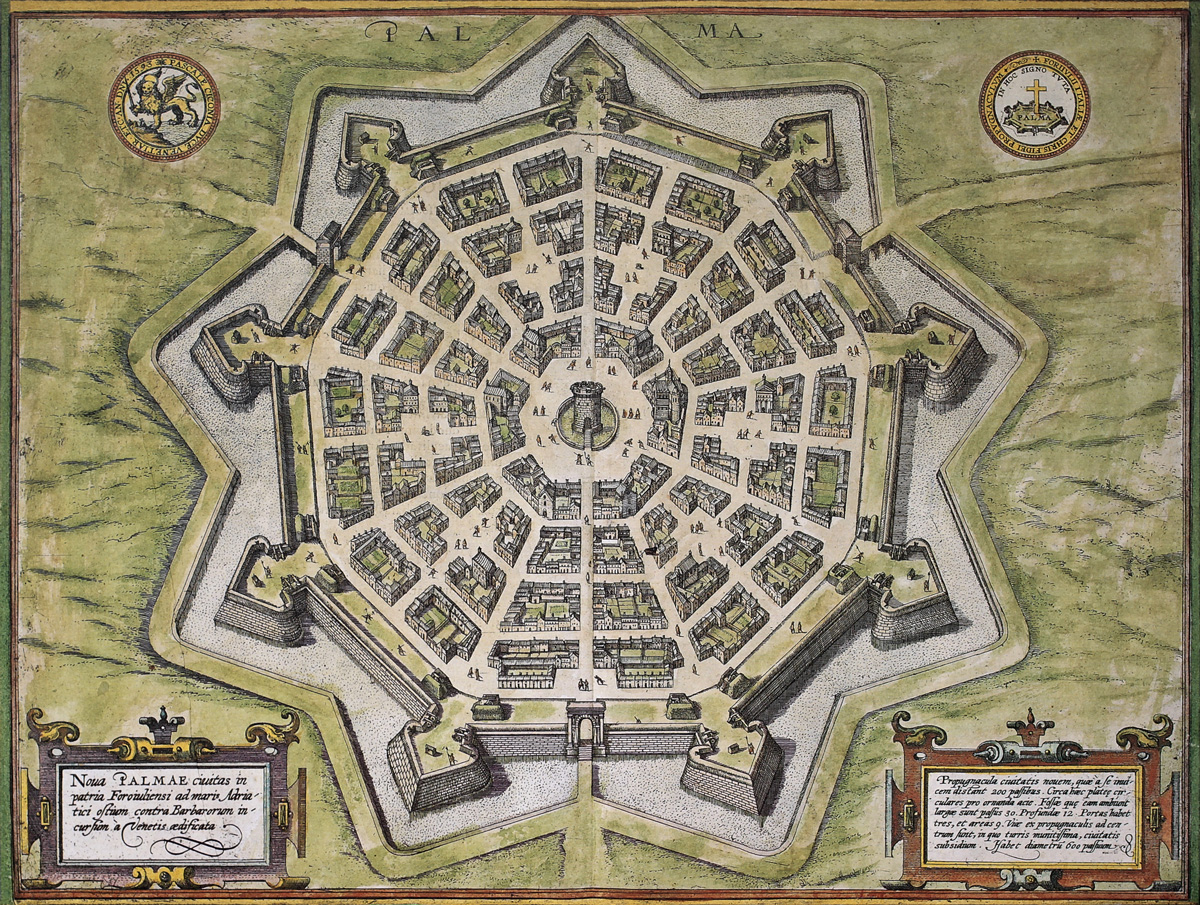 Although the first stone of the fortress was laid on 7 October 1593 on a project by Giulio Savorgnan and Marcantonio Martinengo, guides of a large group of researchers, scholars and architects, there are those who say that behind the initial projects there was also the hand of Leonardo Da Vinci, perhaps on an unsigned draft. The fact that the Serenissima would have wanted Leonardo to head the project seems true but at that time the master was employed in Milan. Nonetheless, it appears that Leonardo actually visited the site during the start of construction.

Initially the fortress fortress should have had only one bastion as a wall. Then, Bonaiuto Lorini proposed an 11-sided plant but the Venetian Senate objected by requesting one with 10 sides and then reconsidered a few months later, opting for 9 sides for economic reasons as the more the bastions were, the more expensive the undertaking would have been. It took 30 years to complete the first circle that extended for a perimeter of 7 kilometers with underground passages of over 5 kilometers. 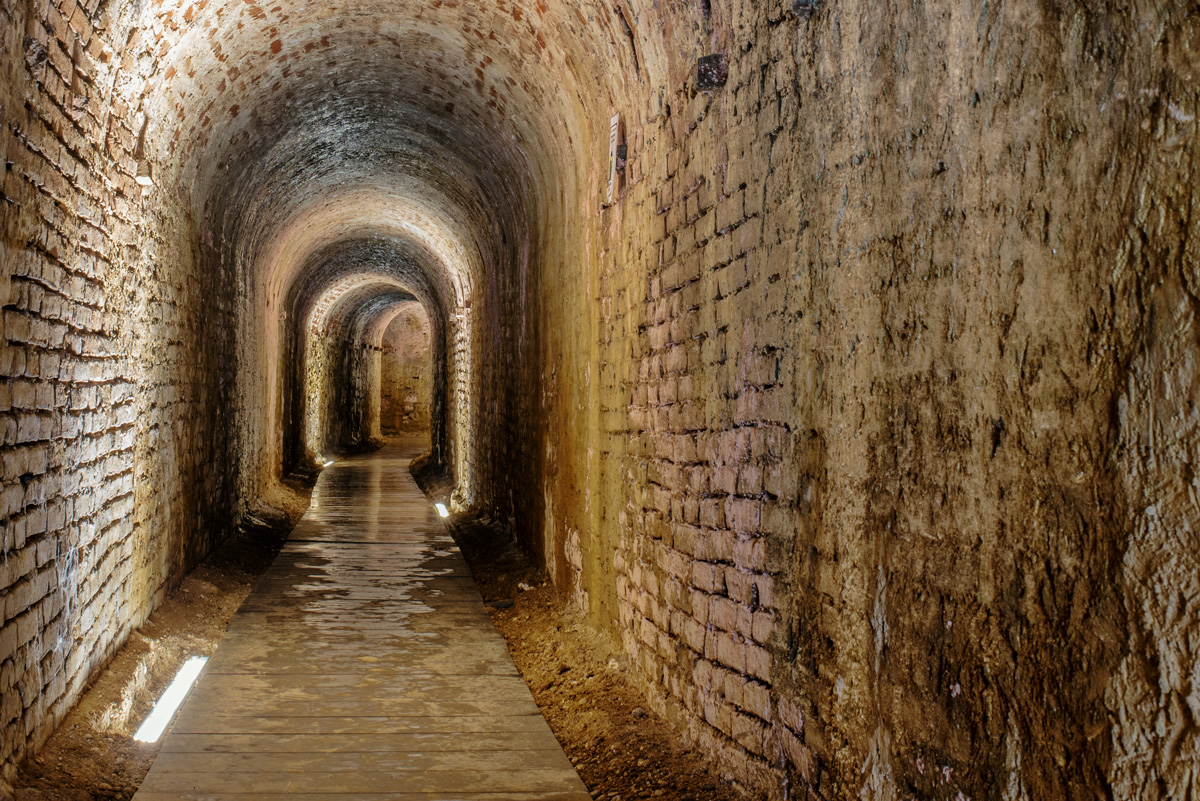 It also took about 30 years to complete the second circle. This was characterized by the raising of the ravelins to protect the 3 entrance doors. The fortress was built as a war machine. Not only was the length of the ramparts established based on the range of the cannons of the time but the whole fortress is below the horizon line to confuse any enemies who would have struggled to see it from afar as hills and mountains are far from the site.
The third circle of walls was built over 100 years later by Napoleon. Work that lasted until 1813, when the French left Friuli.
At this point, the fortress boasted of 3 circles of walls and fortifications consisting of embankments, moats, lunettes, rivellas, gates, dungeons and tunnels, making it the most impregnable city in Europe.

Palmanova was not only meant to be a fortress against any earthly but also spiritual enemies. Presenting itself from above as a 9-pointed star, with 3 circles of walls, 3 access gates (Porta Cividale, Porta Aquileia and Porta Udine), 18 radial streets (6 of which converging towards the central square), the same square central (Piazza Grande) in the shape of a hexagon outlined for the entire perimeter with a water channel, naturally hexagonal, just as the plan of the monument of the bulwark in the center of the square is hexagonal. Well, everything points to the number 3, the number which represents the perfection associated with the divine Trinity. Then, that hexagonal canal in Piazza Grande almost suggests a spiritual barrier, thanks to the purity of the water, to keep out the fire of evil. 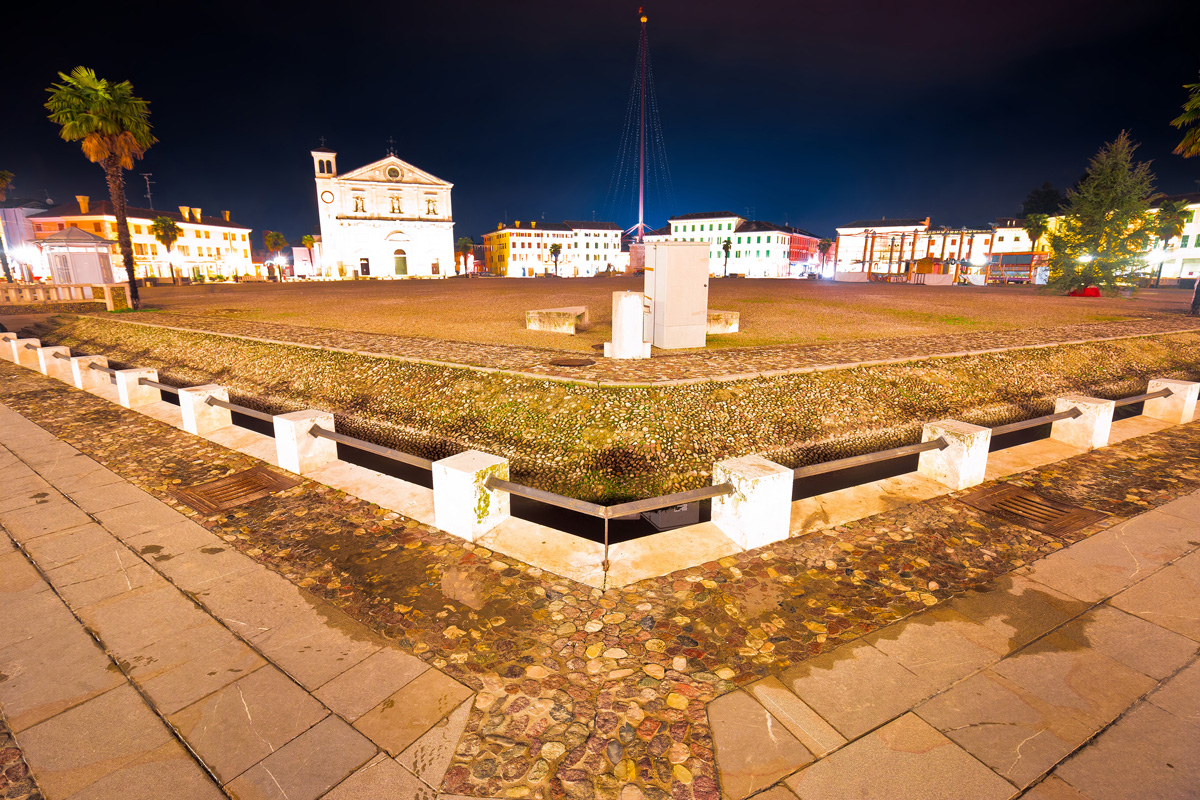 Not to mention that base in the center of the square from which stands the monument of the bulwark which on each side bears sibylline phrases, as if they were indications of wisdom for the people: 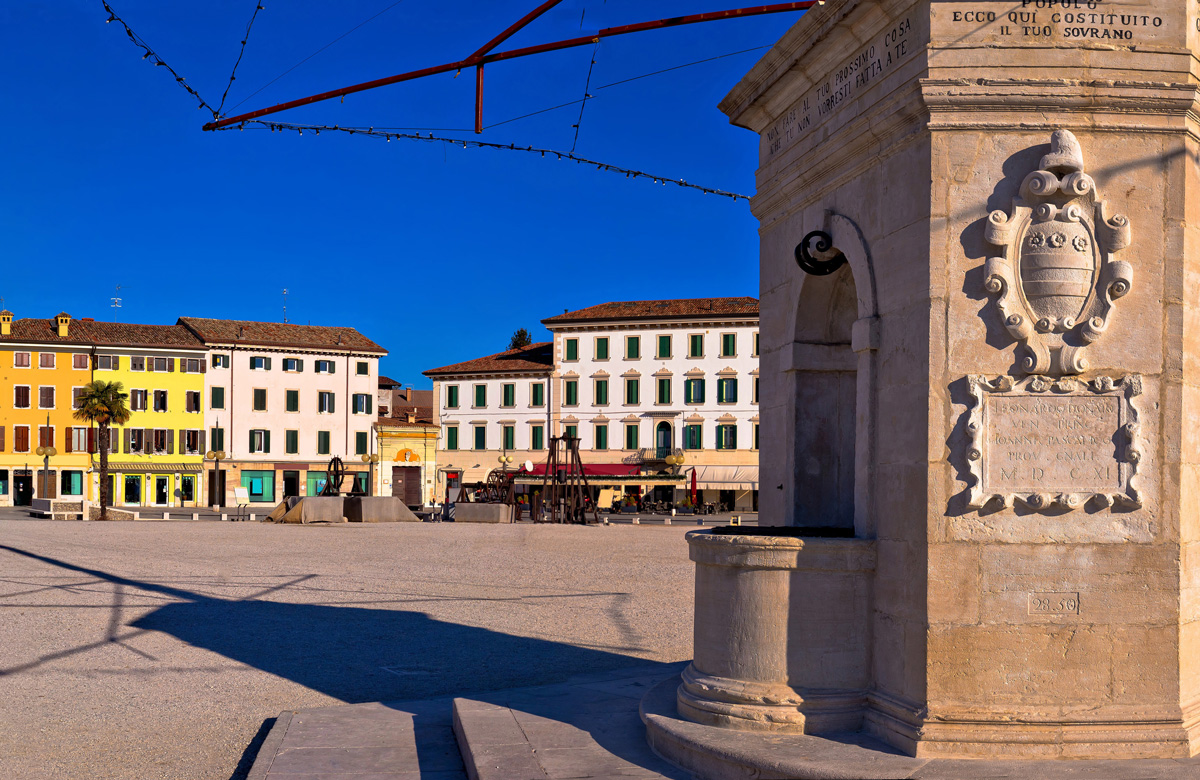 Therefore a perfect fortress against all forms of evil. But also a fortress that aroused fear.

Although it was conceived to accommodate up to 20,000 inhabitants, for a long time the fortress was inhabited only by soldiers and their families. Although the Serenissima wanted to transform it into a lively town, it had to get prisoners to "push" us to live there. Perhaps the idea of ​​raising one's children in a highly militarized and war-oriented environment, or the fear of that perfectly regular, almost otherworldly fortress, perhaps these were the reasons that discouraged the locals to take up residence there. But finally the wars ended and Palmanova managed to get to the present day unscathed, untouched by time and bad weather. Although its economy from the first postwar period to the 1990s revolved for the most part around commercial activities, it was only after the collapse of the Berlin Wall and after the recession of the early 2000s that the soul of the fortress, now a real town, began looking to the future, a future called tourism. 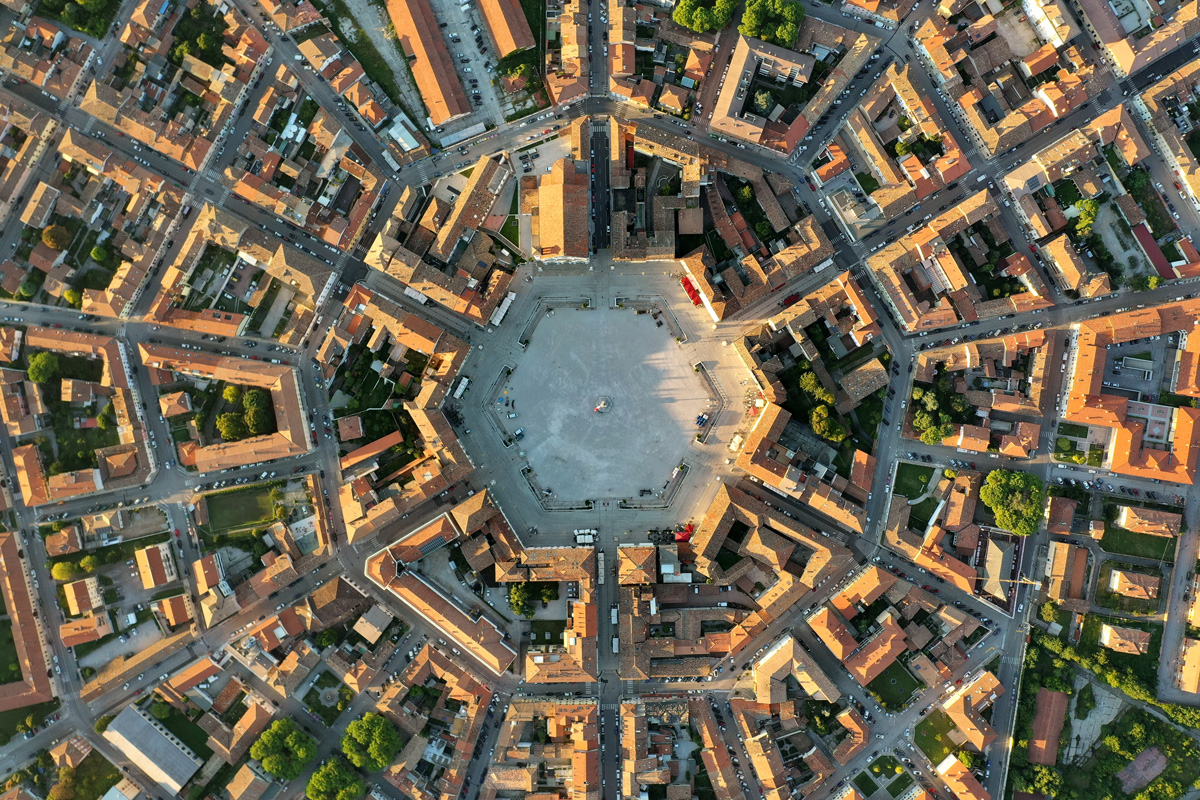 Today the charm of Palmanova strikes anyone at first glance. The tourist activities are many: visits to the walls or the park of the ramparts, walks in the center between churches and villas, historical re-enactments, food and wine tastings, museums, etc. The tourist is not disappointed and, perhaps, he might stumble upon one of those galleries that can be visited, in the mysterious passage that connects the city to the Castle of Manzano, along which Aquleia's treasure should be hidden so as not to let Attila find it. But this is perhaps yet another mystery or legend that the nine-pointed village gives us, also recognized as a World Heritage Site by Unesco.